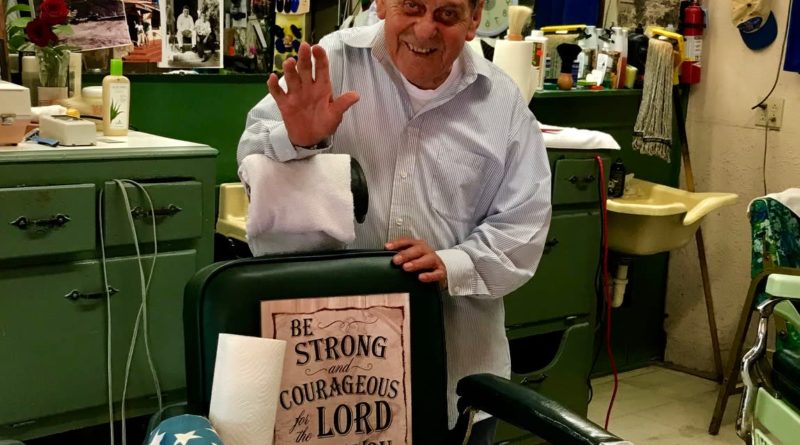 Eliodoro “Lolo” Saldana, who was born on Catalina, celebrates his 90th birthday at film premiere about his life.

Editor’s Note: This article was corrected to reflect that Story Bank Productions did not sponsor the making of “Lolo the Barber” and that the film will be released on YouTube at a later date, which will be announced by Catalina Island Museum.

AVALON—Catalina has hosted some of the most recognized stars of the silver screen, such as Marilyn Monroe and John Wayne, but what would it be without its local heroes, too? Eliodoro Saldaña, most commonly known as “Lolo the Barber,” is one of those icons of the island.

Saldana owns Catalina’s only barber shop called Lolo’s Plaza Barber Shop, but he has been a local celebrity for a long time. On July 3, after this paper goes to the printer, Saldana will have celebrated his 90th birthday in a way not many get to – with a film premiere about his life. Saldana stars in a film titled “Lolo and the Barbershop,” which will open at Catalina Island Museum on the same date as his birthday. The film is the third is a series called Catalina Story Project.

Born in 1929 on Catalina, Saldana lived through part of the years when William Wrigley owned Catalina Island Company, World War II when the island was under military control, and, of course, is a Chicago Cubs fan. Saldana has fond memories of attending Cub games in his youth, according to news outlets that have covered his life. In 1948, Saldana graduated from Avalon High School and went to Long Beach City College. Eventually, he transferred to Cal Poly San Luis Obispo.

Cutting hair was not initially his permanent career choice, he told The OC Register in 2015. Saldana carried his love for baseball into college, where he pursued playing professional. From 1952 until 1954, Saldana was stationed in Germany and when he returned to California he found work as a barber in Long Beach. When he came back to the island, he opened his shop in 1955 and has had it ever since.

An avid volunteer over many years and a sports lover, The Catalina Islander penned that he had even played gold with a 5-year-old Tiger Woods. The article also goes on to state that Saldana says in the film, “You can’t take from Catalina, you have to give something back,” expressing the desire to give back to the community he was raised in and to protect “paradise.”

The film was screened at Ackerman Family Amphitheater at Catalina Island Museum. The screening, which took place from 7-9 p.m., was $10 for non-members and free to members of the museum. Movie-guest also enjoyed appetizers provided by The Lobster Trap as they watched the film outdoors.

Director of Marketing & Public Relations, Gail Fornasiere, stated that the film will be released on YouTube at a later date (after consideration for awards at film festivals) for those who wish to view it.