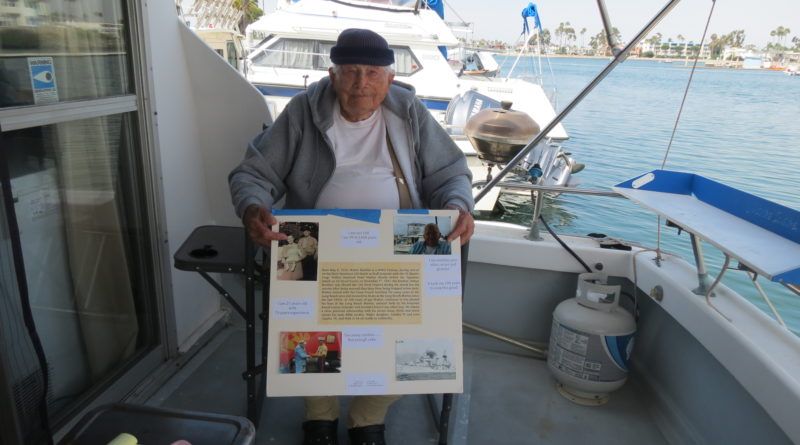 Walt Bueller, a WWII veteran who recently enjoyed his 100th birthday, has lived on a boat at the same slip for 43 years. He tells The Log about his past, friends at the dock and more.

Editor’s Note: On July 25, The quote by Selander in “Humble Beginnings” stating that Bueller’s brother Arthur has survived the Pearl Harbor bombings was clarified to include reports of his death were false.

LONG BEACH—Walt Bueller gazes out onto the water from his boat, a small Pacemaker called Why Not. Bueller has been a liveaboard in Long Beach’s Marina Pacifica since the late 50s. When asked why he moved onto a boat, he looks surprised and says with a chuckle, “I don’t know. I just have a love for the ocean, the waterfront, and I pursued it until I won out and here I am.”

Bueller goes on, “I just love the water. This is my forte.”

Most people don’t get to choose where they hibernate, says Bueller, but somehow he ended up in California and it’s not a bad way to live – the water gently rocks us back and forth as we sit on his boat watching the boats speed by in the main channel.

In The Log’s world, being a liveaboard is somewhat normal, although not necessarily common. Meeting a liveaboard like Bueller, however, is an once-in-a-lifetime event. Bueller is a youthful 100-year-old and recently had a big party to celebrate in May; he was born on May 6, 1919. Lonnie Selander, Bueller’s longtime friend and unofficial caretaker, exclaims, “Walt’s going to outlive me!”

Truth be told, anyone who didn’t know Bueller was 100 would never have guessed it. While he has trouble getting around a little and is almost deaf, overall he has a certain zest for life that at both junctions can’t be touched and is an inspiration to everyone who meets him. 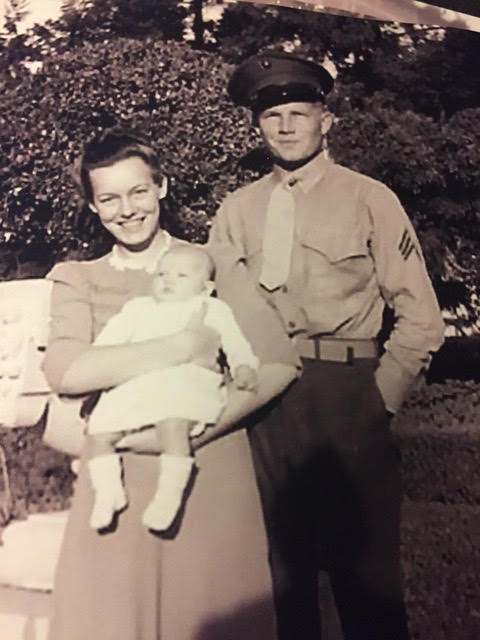 “43 years in this spot. We just got a brand new dock, but he’s always been right here,” Selander tells The Log.

As one might imagine, Bueller has seen a lot in his time, including many changes to the waterfront.

“So many changes. It was like Western Towns here in California – and I roamed Long Beach and L.A.  … It built up fast as far as I’m concerned,” he says of California’s development since he was a kid.

With origins in Canada, Bueller says his family settled in Minnesota. He comes from a lineage of strict Mennonites.  He never really saw their point of view, he said. Bueller never complains about his upbringing, but Selander interjects, stating that times were tough during the Great Depression.

“During the Depression it was hard for his dad to feed all the kids, so he farmed them out for labor,” says Selander.

Bueller went back east once to a farm, but then he came back and ended up on a mortician’s squab ranch in Northern California. Bueller would dress out the pigeons and was separated from his family.

Eventually, Bueller ended up in a well-known orphanage in La Verne, which is now a historic site. At the time, Bueller stated the land was not like it was now – it seemed vast and like a wilderness during his younger days, but not most things inland are as built up as it is on the coast.

“So many kids there. We had a female department upstairs and a male below. The hobos would roam and gather whatever food they could and have a big meal. We would go down and talk to them,” Bueller says.

Bueller joined the Marine Corps when he was an adult, reaching the ranks of Staff Sergeant and traveling to Japan during World War II.

“We were occupational forces and then we went into Japan. I had to go into Sasebo Navy Yard,” Bueller recalls

He mentions he enjoyed the work very much, but his wife, Adele, did not want him to stay in the military. When asked what his wife was like, Bueller laughs and looks to his friend Selander.

“She [Adele] had a propensity to like alcohol,” says Selander as Buller follows up. “She lived with it.”

She gave birth to their oldest daughter Sandy and Bueller says they separated for about 10 years before reuniting to have their second two children Walter “Wally” Jr. and Charlie. All of his kids live in California.

“His brother was on [U.S.S.] West Viriginia and they [U.S. Marine Corps] notified [Walt] that his brother was in the bombing and made a mistake [that Arthur was dead]. A couple days later they came back and said, “No, he’s still alive! All his brother’s buddies died and he was the only one that survived,” says Selander.

Sometime in the timeline, Bueller reunited with his father and they worked in construction together. However, a disagreement came again and they decided to go their separate ways.

For many years, Bueller was a truck driver for the U.S. Department of Forestry, moving alfalfa hay. He loved driving through the mountains and went up and down the coast of Southern California.

“That was a good life for me,” Bueller says of working for the Civilian Conservation Core. “I drove a truck and I drove to Santa Barbara, way up north and I delivered alfalfa hay to the fire lookout stations … I’d lay out my sleeping bag on top of the hay and I could feel the warmth and sleep so good … that was a good, good life for me.”

Before meeting Bueller on his boat, Selander says Bueller’s daughter Sandy, who lives in Huntington Beach, used to visit more frequently but she was recently diagnosed with Stage Four cancer. Selander has nothing but good things to say about his friend Bueller, who he credits with helping his own ailing health.

Several months ago, Selander suffered a stroke, which was a difficult time for him and for Bueller. The health scare encouraged Selander, a smoker of 47 years, to finally give up the habit, take his doctor’s advice and ride his bicycle more often. Selander is the kind of guy who is always willing to lend a hand in true liveaboard fashion. While speaking on the phone with him to arrange a meeting, he states he has to call back because he’s helping someone with their boat; he captures the spirit of what it’s like to live among a close boating community.

Selander describes the atmosphere at Marina Pacifica as “tightknit.” He moves back and forth between Northern California and Long Beach, so neighboring liveaboards volunteer to help Bueller when Selander goes home.

As the interview takes place, Selander is constantly up and flitting about, sharing details of Bueller’s life and showing off photos.

“Yeah, he’s never quiet,” Bueller says of Selander. “He’s like – I don’t know what you are – a spinning wheel. He goes up there, he comes down here. He’s always spinning.”

When asking Bueller more questions about his time in the military, he seems a little hesitant but Selander enthusiastically urged him, “Oh, come on – you’re full of stories, Walt!” In just a short period of time, it’s obvious to see how these men have bonded and in many cases they seem to finish each other’s sentences. Selander describes Bueller as a father figure whom he looks up to in a way.

“We’re so close for so many years now we kind of read each other like a book,” says Selander.

Challenges as a Liveaboard

Living on a boat, aside from the spectacular view every morning, does have its challenges especially when it comes to maintenance. Selander arranges for all of Bueller’s maintenance to be cared for, including hull cleaning and washing the boat. They start up the engine every so often, but neither can take their boats out anymore. In a liveaboard setting, things people might not realize is that one relies on the kindness of neighbors more than any other situation.

“I can’t walk very far. I have a walker – it’s in there.” Bueller says, gesturing inside his boat. “I quit driving, so this is it.”

Each morning, Selander makes Bueller breakfast. Selander hooked up a bell system so that Bueller can ring him to make food. They have a routine together, which keeps their morale high – they don’t eat out as much, but Bueller loves going grocery shopping. It’s one of his favorite social activities.

“He drives me everywhere, to the market to the VA. Without him, I couldn’t make it. He’s my lifesaver.”

Selander responds, “And without you I couldn’t make it either!”

Selander explains with boats it’s not the daily maintenance that’s the problem, but sometimes, emergency situations will arise and that can be especially difficult for Bueller.

“You never know when something is going to break on a boat or give up the goat and it has to be replaced and it sucks when it happens because stuff on boats is usually expensive,” says Selander.

One time, the toilet on Bueller’s broke, which posed a major problem – Bueller needs help getting around, so it’s not possible for him to make it to the restrooms without assistance.

“Oh, what a mess – it was a cellenoid that gave out, an electrical component, so I had to replace it,” says Selander, explaining how he fixed all the plumbing before he left for home in Northern California.

“I talk to him every single morning … I’m always scared to call someone to do a check for me because it’s a joke – are we going to find him alive or dead?” says Selander.

“Yeah, that goes on,” says Bueller, laughing. “Yeah, you don’t want to walk in there and see this spread out!”

The Long Beach VA has also been accommodating. Selander explains that Bueller’s doctor will make calls to his boat if it’s not convenient for Selander or another to take him to the doctor’s office.

These men bring a kind of solace over the inevitable. Taking that step into the unknown can be frightening, but they pass friendly jabs back and forth with a healthy dose of laughter. 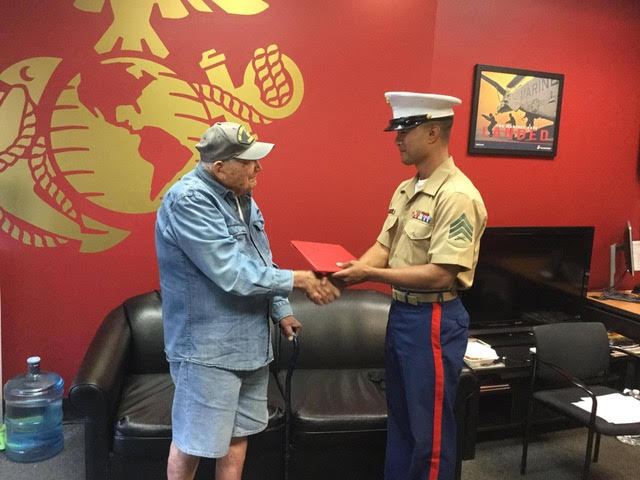 Bueller’s 100th birthday party was a grand celebration. Hats and beer cozies with “Walt Turns 100 – I want a recount” printed in bold capital letters were passed out to guest.

“The Police Department, The Fire Department were here – it was a big ordeal,” says Selander “He had a flag presented to him that was flown over the White House.”

“I took him to the recruiting office here in Long Beach, so they did a mock sign up,” Selander says, which happened on another day as Bueller wanted to reenlist.

Bueller has an infectious, belly laugh and when Selander talks about their trip to the Marine Corps Recruitment Office, Bueller laughs heartily. It’s this sense of humor that seems to be prevalent in every one of his interactions, but he owes his life’s happiness to one source.

“I’m a Christian and I, uh, I seek the Lord every day of my life and if you do that, he’ll seek you. He gives me a happy life and what I have now.”

One thought on “Life’s a Ball at 100: Liveaboard Celebrates Birth & 40+ Years on the Water”