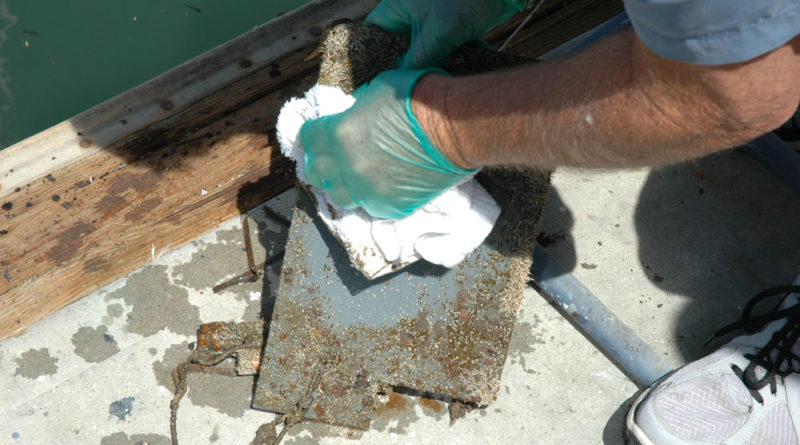 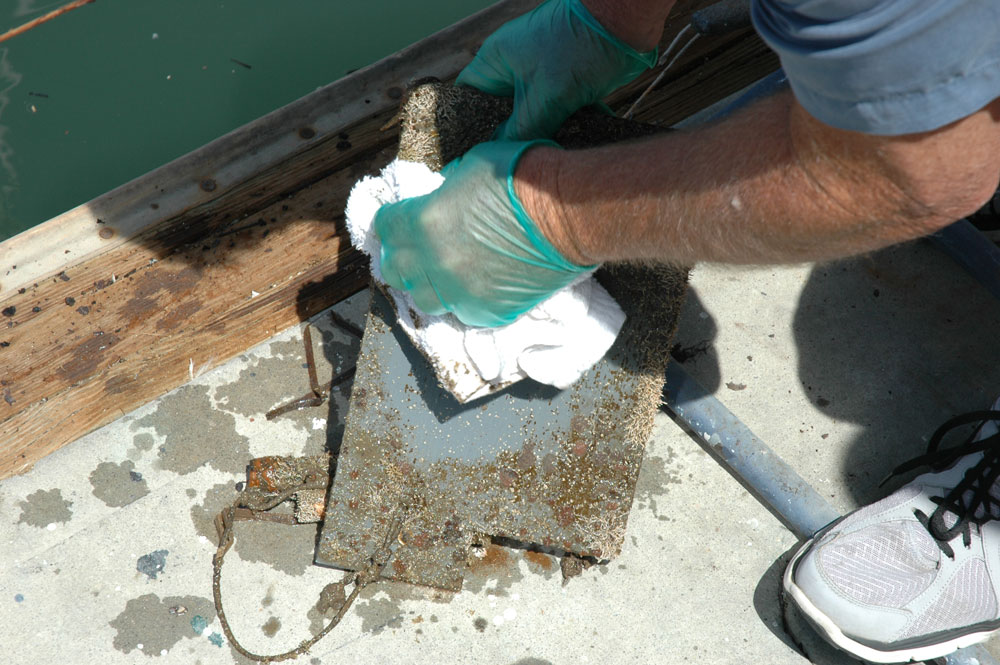 Representatives from Tustin-based SDS Products believe they may have a watertight solution to the dilemma.

SDS-Bionic, personnel and company stakeholders met at Basin Marine Shipyard in Newport Beach to put their results on display. Tom Troglia, president of Advanced Science Coatings, was joined by SDS CEO Tyler Nguyen and president Brian Lopez to diagram the solution. A year ago, the three linked up to facilitate the product.

Troglia has also been working with Basin Marine president Dave New to fine-tune the formula for the past four years, removing biocide from the concoction and adding food-grade components. Enduring “plenty of failures” on test vessels, Troglia said he finally has the correct formula.

So what kind of impact could this product have on boaters facing TMDL restrictions?

Areas of Newport Bay, Oceanside, Marina del Rey and San Diego Bay are all scheduled TMDL sites in the next five to seven years. Implementation of a TMDL aims to lower copper concentration to 3.1 micrograms per liter.

“I had not heard of this particular product before, so I looked it over carefully,” said Ray Heimstra of OC Coastkeeper. “It does appear that this product does not contain any pesticides or heavy metals, so it could be part of the solution for the copper problem in Newport Bay.”

New said he will be teaching applicators how to apply the coating as the product expands. The coating is said to last five to seven years.

“If our product fails, it’s a failure of the applicator, not the application,” Troglia said.

Nguyen added: “It’s also preparation. You need to make sure everything is sanded down and cleaned right. That’s where you fail, if you put it on too thick.”

From the outset, Troglia’s goal was to create a product that implements nanotechnology to minimize marine growth, making it easier to wipe away build-up. He soon discovered he could accomplish the objectives with a treatment that is biocide-free and safe for human ingestion, while addressing copper restrictions.

The chemicals in SDS-Bionic, penetrate the surface of a substrate, repelling moisture, stains and mold. As covalent and ionic molecular bonds link together with the nano particles, the coating links to the surface. The nano portion builds a matrix which bonds to the substrate and connects itself, creating a lattice. The water then balls up, creating a barrier that makes it impossible for sea life to attach to a boat’s hull, Nguyen said.

Troglia said the product will reduce friction in the water, increasing fuel mileage.

SDS asserts Bionic will work similar to an anti-foul, but eliminates the use of pesticides or poisons. This creates “a smooth and slippery” surface, making it hard for marine growth to anchor, eradicating the build-up of barnacles that increase over time, which aids fuel consumption.

“On a boat, I don’t care if it’s fiberglass,” Nguyen said. “There are holes. Barnacles and everything else have to have something to attach onto. That’s what they’re doing—attaching. Take those holes out, it doesn’t mean barnacles can’t grow on it….the anchor points are very small now. So there’s not a big bite on it.”

To prove this point, Troglia unveiled a fiberglass panel that had been floating in the harbor for more than six months—with one side left uncoated and the other coated with SDS-Bionic. The panel was placed about a foot into the water with direct sunlight beating down on it.

“It’s been wiped clean once—maybe the second month I did,” Troglia said. “The fifth month, Dave went down and wiped it off with the towel with no pressure. The uncoated side is full of barnacles.”

Nguyen said more than1,000 hours of lab testing has gone into the product’s creation. Bionic isn’t required to be approved by any state or federal agency, according to Nguyen. And while no boat builders have signed on to use the product as of yet; Troglia said Brunswick did test it.

“We failed [with them] because it wasn’t ready,” Troglia said. “I know if I went back to them they would test again. We wanted to make sure we got it right. We know we have the right formula.”

While other products intend to accomplish the same goal, Bionic is environmentally safe, non-leaching and long-lasting, according to Troglia. The product is applied after two coats of epoxy are placed on the boats’ hull, creating a virtually pore-free coating.

Troglia added a freshly coated boat can go in the water two days after the process is completed.

“There are some non-copper based coatings that will go over the copper-based paints,” New said. “But the problem is they all leach back through. They’re not a non-metallic coating. They have other metals in them.”

New added that it would cost roughly $5,500 to strip and coat a 40-foot boat with SDS-Bionic.