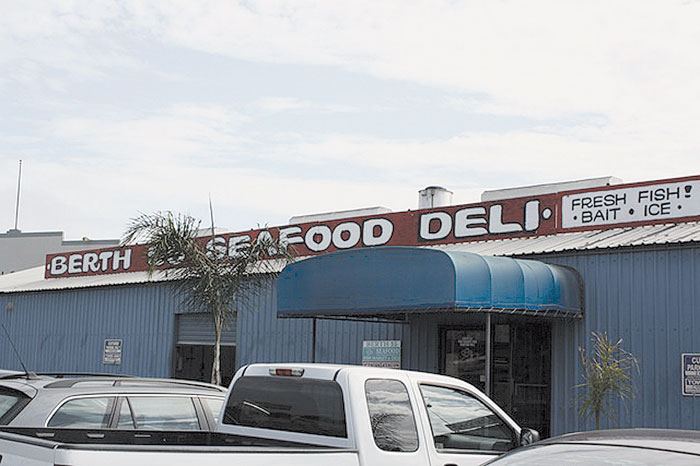 LONG BEACH – Harbor commissioners at the Port of Long Beach’s Sept. 10 meeting granted a reprieve for the restaurant, market, sportfishing and charter businesses at Berth 55, setting aside a Notice to Vacate issued to the businesses by the port earlier this year.

The 180-day notice would have meant longtime tenants including the Berth 55 Fish Market and Seafood Deli, Queen’s Wharf Restaurant, Long Beach Sportfishing and more than a dozen charter boats would have been forced to leave by Oct. 16.

The issue arose when Port of Long Beach staff began searching for a new home for the port’s fireboats. The old firehouse was in the way of the $1 billion Gerald Desmond Bridge widening project, leaving the current fireboats docked alongside a temporary facility.

After conducting studies around the harbor, the Berth 55 location was found to be the only viable location to build a new fireboat house, which meant the current tenants would have to be displaced to make room for the project.

A 180-day Notice to Vacate was issued to Berth 55 leaseholder Rebeca Maehara in April, leading to a public outpouring of support for the businesses and sportfishing boats based there.

Since then, town hall meetings have been held on the site, and more than 5,000 signatures from locals and frequenters of the restaurant, market and docks were submitted on a petition to keep Berth 55 open.

At the Harbor Commission’s Sept. 10 meeting, many public comments were received about the plan, pleading for an alternative to be considered for Berth 55’s future.

“Nobody wants to see these beloved buildings close, if there is a possible way to avoid it,” said Daniel Brezenoff, speaking on behalf of Long Beach vice Mayor Robert Garcia. “We want to be sure that any possible alternative is explored thoroughly.”             Following the meeting, the port issued the reprieve.

“We will do an environmental analysis of the proposal for a new fire and security center at the Berth 55 site,” said Susan E. Anderson Wise, president of the Board of Harbor Commissioners. “In the meantime, the 180-day notice has been rescinded and the restaurant and sportfishing vessels can stay.”

Lawrence Maehara, manager of Queens Wharf Restaurant and son of Rebeca Maehara, said he doesn’t think the plan would have been delayed if the community had not come together in support of the family run operation.

“I got lucky: The community really came together for us,” Maehara said.

While the delay means the Berth 55 businesses can stay on the site, the future remains tentative, as the Port of Long Beach will begin work on an Environmental Impact Report on the relocation plans for the fireboat house.

“I’m willing to do whatever it takes to stay here,” said Maehara, whose restaurant is one of the few locations longshoremen can easily get to for lunch in Long Beach. “There’s no other place that we can do what we do here. It’s a unique location, and the location’s unique characteristics are what make it work. We’re in it for the long haul.”

Since 2008, Berth 55 has been operating on a month-to-month lease, with the Port of Long Beach not opting to renew the Maehara’s 20-year lease at that time — knowing that more than $4.5 billion in redevelopment projects were coming, and that potential land uses would be altered.

For now, it looks like the Queens Wharf Restaurant, Berth 55 Fish Market and Seafood Delit, Long Beach Sportfishing and the 12 charter vessels operating at Berth 55 will be safe for at least a year, as the environmental studies and reviews are conducted by the Harbor Commission, the Long Beach City Council and possibly the California Coastal Commission.

“If there is deemed to be a significant environmental or economic impact from the project, than the plan will need public review and could require Coastal Commission review, but that is getting ahead of ourselves,” said port spokesman Art Wong. “We don’t want to pre-judge what options there could be before the review is done.”

With Port of Long Beach officials delaying the eviction of Berth 55, Maehara said he is more optimistic than ever about the process going forward.

“We’re not out of the woods by any means, but now, I feel like I have a voice,” Maehara said. “Through the community’s output, I have a voice. Before, I was doing it on my own, and I didn’t know how to go about it.”