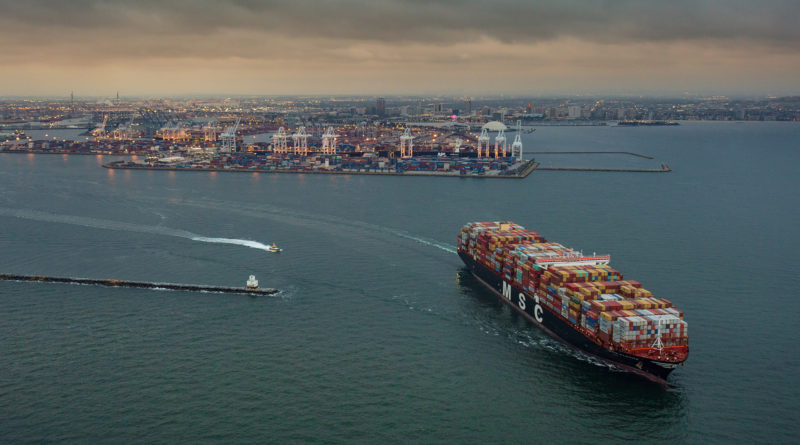 LONG BEACH—Members of the Long Beach City Council resolved on March 24 to seek a $145 million private placement loan with Bank of America as potential substitute funding for the Gerald Desmond Bridge replacement project. City officials are seeking a loan for the bridge project – and the Long Beach Harbor Department – as a result of the COVID-19 outbreak and pandemic.

Long Beach City Council had, in January, approved the issuance of revenue bonds (through public offering) for the development, design and construction of the Gerald Desmond Bridge replacement. The COVID-19 pandemic, however, forced a shutdown of the municipal bond market, according to city staff.

“The city of Long Beach was unable to sell the [bonds as a result of the pandemic and market shutdown],” city staff told council members in a report. “As a financing alternative, the Board of Harbor Commissioners, acting on behalf of the city, proposed to enter into a private placement loan with Bank of America … [for a] principal amount not to exceed $145,000,000.”

The private loan would carry the same terms as the revenue bond approved in January.

Seeking a private placement loan, according to city staff, would give Long Beach Harbor Department the financial flexibility it needs “to pay for the completion of the Gerald Desmond Bridge, and to ensure adequate cash reserves during a volatile and uncertain economic environment.”

“The private placement loan will be a special, limited obligation of the city, secured and solely payable from Harbor Department revenues. The private placement loan will mature in approximately 1.5 years,” city staff said in a report to council members. “The estimated total debt service would be approximately $149 million and is subject to change depending on market conditions.

“The Harbor Department plans to pay off the private placement loan with a separate loan provided by the U.S. Department of Transportation or by issuing a long-term bond,” city staff continued. “The General Fund Group will not be liable for the debt service payments.”

The original Gerald Desmond Bridge was built in the 1960s but is now outdated. Building a newer, higher bridge would allow for larger cargo ships to pass underneath and more vehicles to travel on it in either direction.

Caltrans and the Port of Long Beach are jointly backing the project, with assistance also coming from the U.S. Department of Transportation and L.A. Metro.

The new Gerald Desmond Bridge, once complete, will have a 205-foot vertical clearance, three lanes of vehicular traffic in both directions and stand as the second-tallest cable-stayed bridge in the United States. The two cable-stayed towers each reach 515 feet in height.