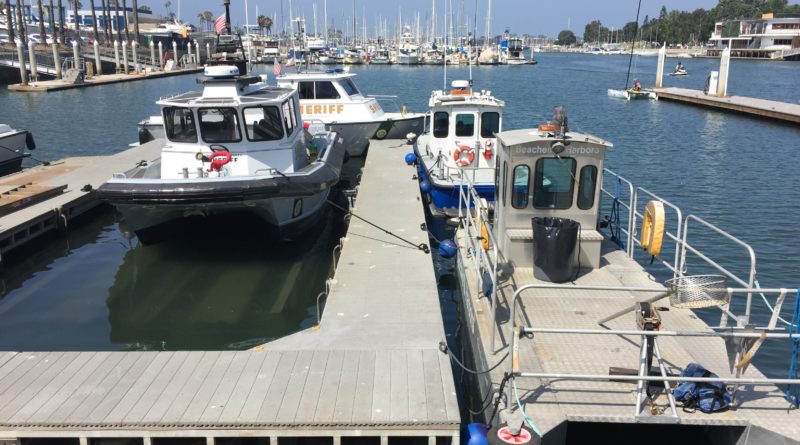 LOS ANGELES—The Los Angeles County Board of Supervisors formally accepted a grant award for $163,200 from the South Coast Air Quality Management District on July 16. County officials will use the grant funding to acquire two vessel engines for the Sheriff’s Department of Technology and Support Division. The grant is part of the Carl Moyer Program.

“The engines will be replaced with new engines meeting the new requirement. The two vessels will continue to be used for routine patrol duties by deputies at the Department’s Marina Del Rey Sheriff’s Station,” a letter jointly signed by Sheriff Alex Villanueva and Undersheriff Timothy K. Murakami said. “These deputies are responsible for a vast patrol area which extends from the Orange County line to the Ventura County line, including Catalina and San Clemente islands.

“Modern engines would make the vessels far more efficient, cleaner running and cost effective, and would better serve the citizens of the county,” the letter, which was sent to the Board of Supervisors, continued.

County officials, as part of receiving the grant, must provide the South Coast Air Quality Management District with annual vessel reports, starting June 15, 2020 and continuing through June 15, 2030. The reports would include updates on operational performance and repairs and maintenance performed.

EPA mandated a set of standards for non-road diesel engines in 1994; more stringent standards were adopted between 2000 and 2008. The engines currently used by the Sheriff’s Department in Marina del Rey do not meet current EPA standards, according to county staff.

Federal environmental regulators established three tiers – Tier I, Tier II and Tier III – of standards for engines, all in the name of reducing emissions.

“The Tier standards are met through advance engine design with limited use of exhaust gas after treatment (oxidation catalysts),” Villanueva and Murakami stated in their joint letter to the Board of Supervisors. “The current engines used by the Department, purchased in 2005/2007, were manufactured by Moose Boat and do not meet the current EPA Tier Ill standards.”

The engines to be acquired with the accepted grant funds would meet the EPA’s current standards for emission reduction, which is classified as Tier III.

The Carl Moyer Program is officially the “Carl Moyer Memorial Air Quality Standards Attainment Program” and, according to the California Air Resources Board, “provides grant funding for cleaner-than-required engines, equipment and other sources of air pollution.”

As many as 35 local air districts implement the Carl Moyer Program, in association with the California Air Resources Board. More than $1 billion has been allocated to various agencies and districts under the program, with $60 million in grant funding awarded each year to clean up or replace “older polluting engines throughout California,” according to the Air Resources Board.