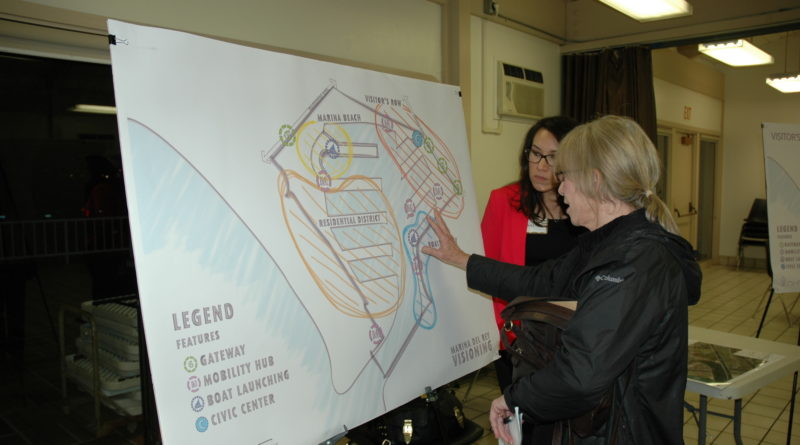 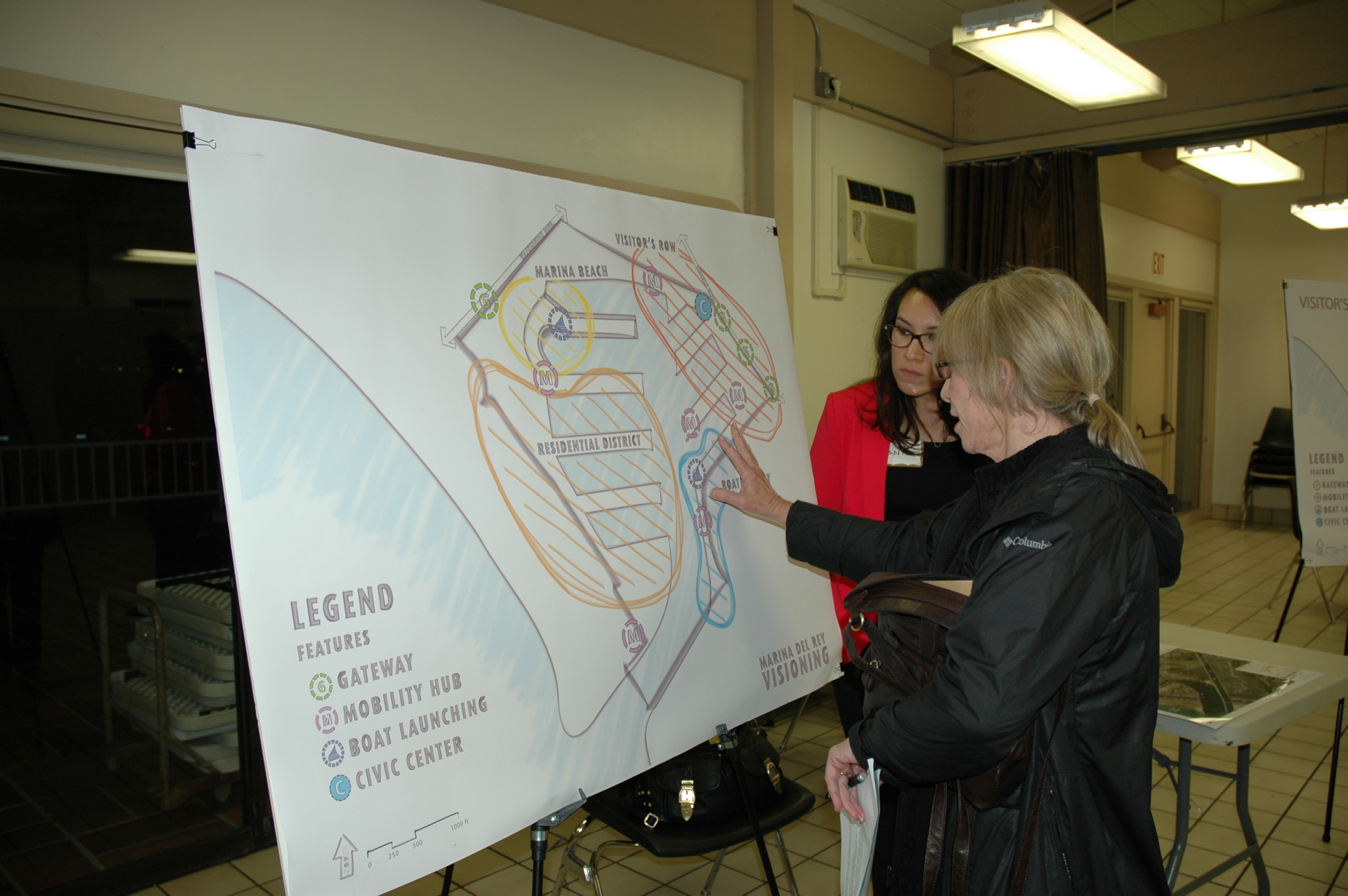 Hosted by the County of Los Angeles Department of Regional Planning, the open houses provided residents and boat owners an opportunity to voice their concerns, opinions and thoughts on the county’s plans for the marina.

Members of the public took their time reading a detailed PowerPoint overview of the vision plan before examining large district themed maps of the marina which highlighted the county’s plan to relocate the launch ramp at Parcel 49 to Basin H, near the water’s main channel and South Fiji Way.

I row around [the main channel] and it’s a very high traffic area,” said Barry Fisher, a rower and Marina del Rey resident. “A lot of incidents happen there,” he explained, recalling a 2012 incident where a motorized boat hit a row boat and split it in half, injuring nine people.

“I do a lot of boating and I can’t see everyone launching in the same basin as a safe option,” said Jon Nahhas of the Boating Coalition.

While many boaters have their concerns, Gina Natoli, supervising regional planner for the Los Angeles County Department of Regional Planning, assured speakers that the location is a safe move, she said, “The Coast Guard and marine engineer told us that our plan is safe.”

She explained that the launch will not be relocated into the main channel, but instead will go into Basin H, which would be separated from direct boat traffic.

“We met with some unmotorized boaters and asked where they would like to have a launch,” Natoli explained. “They circled the area between Fisherman’s Village and lower Marina Village.”

Another reason for moving the launch ramp is to create new retail space, Natoli said.

“We can’t revitalize exciting retail use on Parcel 49,” she added. “Residents have told us that they want more restaurant selections. Businesses are frustrated with how little customers stick around.”

The site of the public boat launch would take on the new district theme of “Visitor’s Row,” dedicated to 200,000 square feet of development dedicated to retail and entertainment purposes. The site will become part of the marina’s new layout – four thematic districts that will be created to differentiate residential from shopping, hotel and boating areas.

These new districts — “Boater’s Way,” the “Residential District”, “Marinas Beach,” and “Visitors Row” – will dissect and order the marina’s areas by their function.

“A big concern people have is that we don’t have a promenade; by focusing districts we can route people to the places they want to access,” Natoli explained. “Let’s focus marine use on Fiji Way to free up space for other uses.”

Despite a public input process that began in April 2013, where county staff members met with residents to hear their ideas and concerns about future development, many boaters felt that their voices went unheard.

“This visioning did not open land use issues to the public,” Nahhas said. “When we saw the proposal to have the launch ramp, we were appalled.”

According to the Visioning Plan, Marina (Mother’s) Beach will feature a waterfront promenade leading to low and mid rise hotels where up to 940 new rooms will be developed. Bicycle sharing kiosks

Apartment complexes around the area, including Mariner’s Bay on Palawan Way are making changes as well, one resident said.
“They switched everybody to month to month, they’re no longer giving out leases,” he said. The complex will soon be undergoing renovations, in which case they will be asking tenants whose leases have expired to leave. Those who wish to return to their residence after renovation will be able to but on a new rent, the Mariner’s Bay resident added. “The rent will go from $2,000 to $2,500 minimum for one bedroom.”

The resident also noted that owners of the complex are not offering any compensation for eviction.

“The highest existing occupancy of the Marina del Rey hotels was 70 percent, why would you want to put another hotel here, we don’t get it,” said Nancy Marino, a 25 year resident and avid boater.

A more efficient form of public transportation is also being considered for the area, re-purposing a number of the areas parking lots with “hubs” at each district that will offer a variety of mobility options.

“Mobility hubs would integrate different means of transportation; transits would stop there, it would have bike rentals and water taxis,” Natoli said. “People are always complaining about the traffic, this way they can park at the hub and have easy public transportation access.” The hubs will also include waterbus stops, bicycle facilities, bicycle parking, bicycle sharing kiosks, pedestrian access, visitor information and car sharing opportunities.

With the open houses now over, the Los Angeles Department of Regional Planning’s next step is to present the Marina del Rey Visioning Statement to the Design Control Board, the Small Craft Harbor Commission, the Regional Planning Commission and the Board of Supervisors said Kevin Finkel, regional planning assistant.

Specific dates for these meetings have yet to be determined.