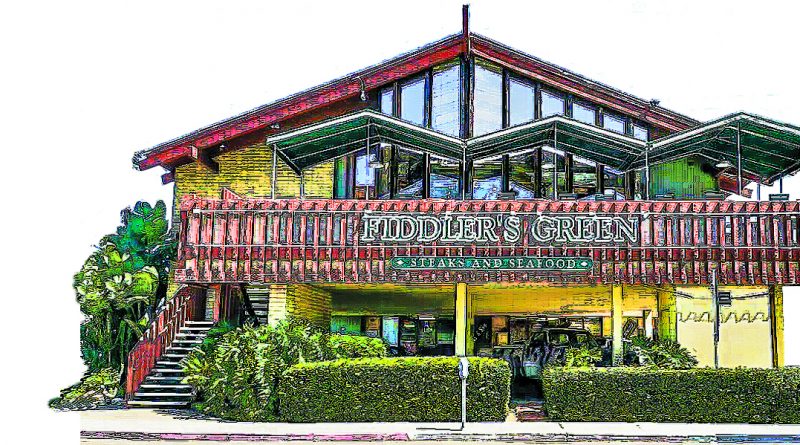 Yacht brokers and others involved in the boating industry surprised Fiddler’s Green, a popular restaurant and gathering spot for the local industry, with a holiday donation.

SAN DIEGO—Open, close. Open, close. That has been a familiar story for many Southern California businesses as county and state officials grappled with how to handle to the novel coronavirus. Many in the boating industry held their breath as they expected the same, but instead found themselves trying to catch their breath after an unexpectedly busy year.

“Covid made boating the thing to do for your family,” said Bernadine Trusso, President of Dona Jenkins Maritime Document Service, Inc. in San Diego.

Trusso said with everyone in the boating industry doing so well in 2020 and watching Steve Rock have to open, close, open, close his restaurant Fiddler’s Green she wanted to do something to pay it forward. Trusso organized a surprise donation for Rock and Fiddler’s Green, collecting $12,250.

“He’s got a big place in my heart,” Trusso said.

Fiddler’s Green has long been a community gathering spot for those in the marine industry in San Diego, serving as the meeting spot for a local monthly yacht brokers forum, a popular place to grab dinner and a drink after work and host for Dona Jenkins Maritime Document Service’s Christmas party.

Rock worked as a yacht broker for 50 years before taking over ownership of the restaurant, which was previously Chart House, in 1994.

Many continued to support the restaurant throughout the year, ordering food to their offices, bringing friends and family there for dinner and purchasing gift cards. However, covid restrictions pushed some events, including the Dona Jenkins Maritime Document Service Christmas party, off the table.

“With the Christmas party being canceled due to the restrictions due to covid, that’s when I said we need to help support him,” Trusso said.

After getting some positive feedback about an idea to collect donations for Rock and Fiddler’s Green, she sent out an email to her list of brokers throughout California on Nov. 30. Throughout the month of December, donations started to trickle in from yacht brokers and others in the marine industry.

On Dec. 22 Trusso and Barrett Canfield, President of South Coast Yachts Greater San Diego Area, surprised Rock and his team with the $12,250 donation.

“When you see their faces and their reactions, Steve actually took his mask off his mouth and covered his eyes,” Trusso said. “He was really touched.”

Rock said he got donations from people as far north as San Francisco.

“I was shocked, I didn’t expect it,” Rock said. “They kept a good secret. I was appreciative.”

Rock said it has been a very challenging year for them, estimating they were at about 25% of sales of a typical year. He said he wanted to thank everyone who chipped in.

“I gave most of it to my employees for Christmas bonuses because they had a tough year too,” Rock said.

He said despite a hard year, Fiddler’s Green has been doing fine and isn’t going anywhere.

“We will continue to do takeout and delivery until we can get through this,” Rock said.