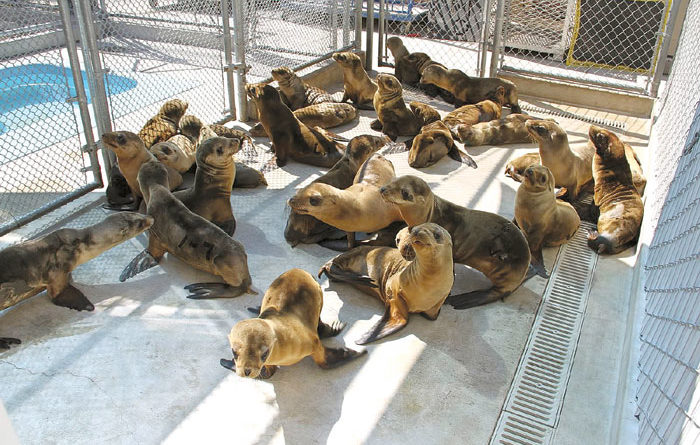 LAGUNA BEACH — The Pacific Marine Mammal Center (PMMC) has declared a “state of emergency” as the organization tends to an overwhelming number of sea lion pup rescues.

On March 11, the organization announced it was in a “state of emergency” as PMMC staff and volunteers worked to care for rescued sea lions. PMMC rescued 12 sea lions March 9, marking the center’s highest number of rescues in a single day.

At press time, 98 animals were in the care of the rescue center, with sea lions making up the patient majority.

“The last time we had this many sea lions this early in the year was 15 years ago,” said Michele Hunter, director of animal care. “We are seriously concerned about the pace at which animals are stranding — and having the resources to keep up.”

The majority of sea lions being rescued are coming ashore severely malnourished, dehydrated and underweight, requiring intensive care. PMMC officials estimate that sea lions in this condition often require a two- to four-month stay at the center before being healthy enough to be released back into the ocean.

“Our organization functions as a hospital for marine mammals in need and offers them the medical care necessary to get healthy enough to return home,” Hunter said. “This requires a great deal of resources — including space, funds for medicine and food, medical staff time and vehicle transportation to and from the beaches.”

With resources dwindling, the center is asking for the public’s help.

PMMC, the sole nonprofit organization in Orange County licensed to retrieve and care for marine mammals, is asking for donations to help the center provide the sea lions with resources required to bring them back to a healthier state.

“With this high number of animals, we are going through our financial resources at an alarming rate,” said Keith Matassa, executive director. “Every dollar counts, and anyone able to support us during this time is greatly appreciated.”

Another way to help is by calling the center when a sickly sea lion is spotted.

“We have had a higher number of people chasing the animals back into the water this year, which is the worst thing that can happen to a sick animal,” Matassa said. “These pups are coming ashore to get warm and rest, and are hauling out of the ocean to survive.”

Boaters who spot a sick animal should call PMMC immediately to help identify the animal and location.

How to Help
Pacific Marine Mammal Center suggests taking the following actions if a stranded marine mammal is spotted on shore:

* Do not approach the animal.

* Keep a distance of 50 yards from the animal.

* Call Pacific Marine Mammal Center at (949) 494-3050 to report the exact description and location of the animal.

* Keep others from approaching the animal, as well as any dogs.

* Do not attempt to push or encourage the animal back into the ocean, pour water on the animal, or feed the animal.