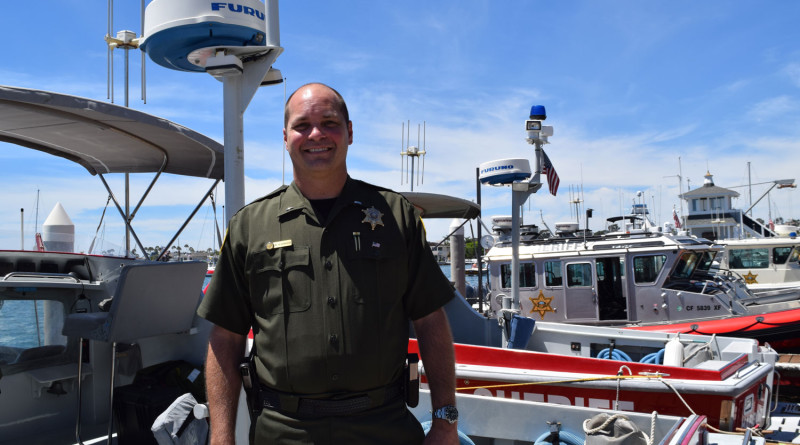 NEWPORT BEACH – Locals and visiting boaters may have noticed a new face around the harbor. Lt. Mark Alsobrook, an Orange County resident and avid boater, has stepped into the harbormaster position, replacing Lt. Michael Jansen who retired last month.

Some excerpts from The Log’s interview with Harbormaster Alsobrook:

Have you always had your eyes set on the harbor?

From the time I hired on with Orange County Sheriff’s Department (OCSD) in 1997as a deputy sheriff, I wanted to be out here [the harbor] but the timing was never right. When I first started here if you didn’t have 15 years in the department you were not considered for the harbor; [the positions] were for senior deputies.

What drew you to a Harbor Patrol position?

I wanted to be a Harbor Patrol deputy. The most fun is the guys out there doing the work and they are the most valuable asset. It’s the deputies and support staff that makes things work.

I grew up in the Bay Area where I did a lot of boating on Half Moon Bay and a lot of sportfishing. I’ve always been on the water and love the ocean. We owned boats my entire life and when I moved to Orange County 20 years ago I purchased a 30 foot flybridge twin screw and had that for a long time. But then my boat was replaced by my four kids.

Did you always know you wanted to join OCSD?

My first career tract was in medicine. When I transferred to Fresno State my best friend was a reserve for the Fresno Police Department and that caught my interest and I took criminology courses and pursued that. I replied to an ad for OCSD deputies and I was fortunate to be selected.

What has been your main focus thus far?

Since I started in this position on July 10 I’ve been in contact with a few yacht clubs. I have a few pending appointments with some of the yacht clubs and I want to meet all of them as well as businesses on the waterfront and local officials. My primarily focus has been the mooring RFP.

Every time there is a change in command there is an opportunity for new direction and new visions. My goals are to be responsive to the needs of the boating community that is why we are here, at the same time we have to balance the public safety and relations with the community.

What should boaters know?