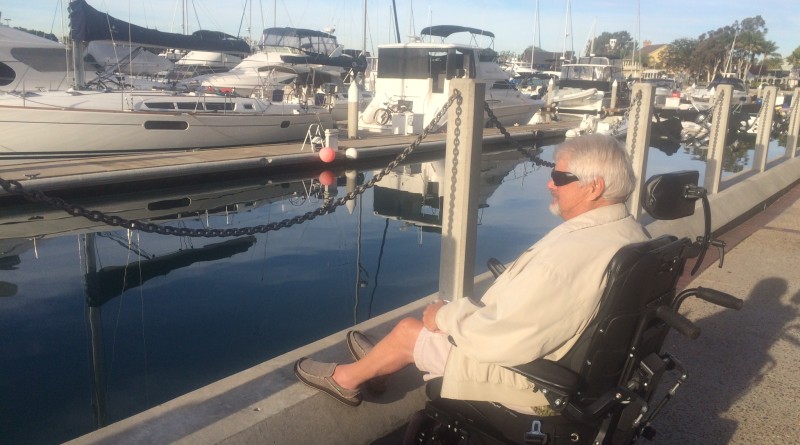 Key Guyer regularly enjoyed a cup of coffee while looking out onto Marriott Marquis’s Marina. The dockmaster is retiring after 10-plus years of service at the marina.Ken Guyer photo

SAN DIEGO — The longest-serving dockmaster at San Diego’s Marquis Marriott Marina is riding off into the sunset, calling it a career after spending decades in the recreational boating universe.

Ken Guyer will retire from his role as dockmaster on Sept. 30. He was named dockmaster of the Marquis Marriott Marina, home to 446 slips, in 2006. Frank Quan, who previously served as the harbormaster in Oceanside, will take over Guyer’s role on Oct. 1.

“This has been an excellent way to end my 53 years of working,” Guyer told The Log in a phone interview, commending Marriott for giving him an opportunity to finish his professional days at its downtown San Diego waterfront property. “I couldn’t ask for a better place to retire from.”

During his time at the Marquis Marriott Guyer said the marina developed into one of the best communities in San Diego. The docks were regularly filled with an economically and socially diverse group of boaters.

“A marina manager is really a mayor and a sheriff. It’s a community,” said Guyer.

The local maritime community will still be able to connect with Guyer here and there. During retirement Guyer plans to embark on several cruises with his wife, including a cruise from San Diego to New York.

When he is not aboard a cruise liner Guyer might be lending a hand to the Midway and Maritime museums. Guyer might even write a book during his newfound free time, detailing his many experiences from the Vietnam War to spending days on San Diego Bay.

His love of the water actually goes back to his service in Vietnam. The war might have affected him physically – Agent Orange left him to be fully disabled – but when he returned to the states Guyer found peace in navigating local waters and enjoying the surrounding environment without the worries of battle.

He started working on San Diego’s waterfront in 1974, first at a boat rental business in Mission Bay and then aboard the local fishing fleet.

It was not long before Guyer became a licensed captain. Among his many boating activities included skippering Stars and Stripes for three years in the late 1980s.

After spending time in the San Diego Fire Department Guyer moved to working waterfront fulltime. He became interested in marina management after working at Chula Vista Marina. Shortly before his tenure at Marriott Marquis Guyer was a co-producer of the San Diego Boat Show.

When he wasn’t managing marinas Guyer served as a voice for recreational boaters on the Port of San Diego’s Harbor Safety Committee.

“I have served for two decades on the Harbor Safety Committee representing recreational boaters as an alternate to Capt. Debra Marks and voting member representing marinas and yacht clubs. I was co-chair to chairman Capt. Rich Gobin and served as chairman after [he] passed away,” Guyer recalled. “Hopefully I will continue in some capacity after retirement.”

Guyer added the biggest highlights of his time at the Marquis Marriott was when the hotel and marina hosted the VA Summer Sports Clinic for five years.

“This was for severely wounded Afghanistan and Iraq war veterans. They participated in cycling, sailing, track and field, surfing and kayaking,” he said. “This gave these vets the confidence to try new things in their life after the service.”

“I started working on the waterfront in 1974. I think the progression of the people involved in recreational boating has changed significantly,” said Guyer. “A lot of traditions have gone away. I’m not saying that’s a good or bad thing. Boating has become something split between condo owners and those who really enjoy boating.”

The traditional boater still makes up 60 to 70 percent of the boating population, in Guyer’s estimation. He believes these numbers would remain steady through at least the next decade.

Within that decade the Port of San Diego could witness several changes. Within the Marquis Marriott alone several renovations are being made. Perhaps the marina would one day undergo a full-on rebuild and include space for a megayacht dock.

Guyer is also excited about the Seaport Village plans, adding the area needs to be made into something people can enjoy.

“I think the TMDL is … an aggressive move,” Guyer told The Log, adding boaters are very conscious of keeping the water clean. “It did bring attention to water conservation … and I applaud that. I don’t think boaters are to blame for the pollution we have.”

When all is said and done, though, Guyer said being on the water was the best office space he could possibly find.

“Done a lot, seen a lot, but I don’t think I could ask for a better career choice than being in the water,” said Guyer.

2 thoughts on “Marquis Marriott Marina manager calls it a career”