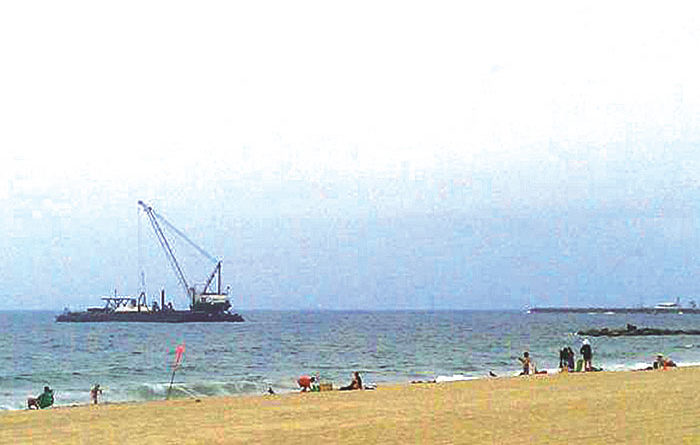 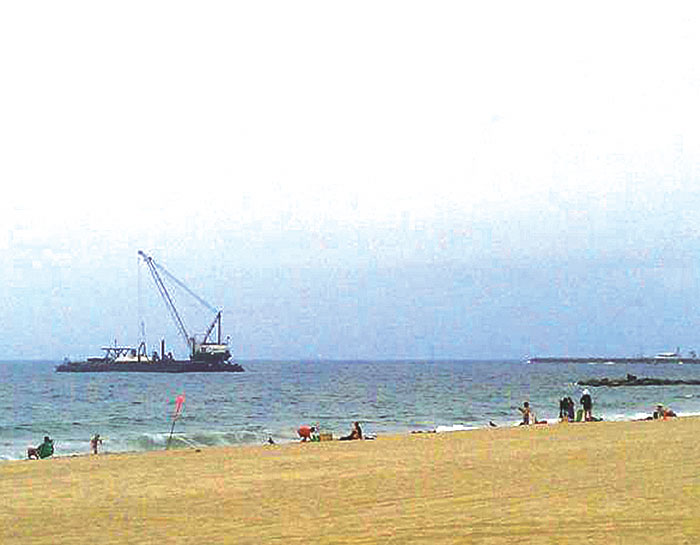 MARINA DEL REY — Since April, the 2,095-ton derrick barge Paula Lee has been working at Marina del Rey’s harbor entrance, removing thousands of cubic yards of sediment from the channel and placing it in barges for disposal at the Port of Long Beach’s authorized fill site.

The $13 million project has helped establish a deeper and safer channel for boats entering and exiting the harbor, and it has also removed contaminated sediment from the area that was unsuitable for ocean disposal or beach replenishment.

Of the 1 million cubic yards scheduled for removal, 500,000 cubic yards tested unsuitable for ocean disposal — and after four months, that material has been cleared out of the area. With the contaminated sediment removed, the project will move toward removing the clean sediment, using the sand to replenish many of the area’s depleted beaches.

The 40-day project will be moving approximately 160,000 cubic yards of sediment from Marina del Rey’s north entrance and barging it to an offshore location southwest of the Topaz jetty, at a depth of 30 to 50 feet.

“That’s a natural depression that will store the material for future replenishment projects,” said Cesar Espinosa of the Los Angeles County Department of Beaches and Harbors, the dredging project’s organizer.

The area acts as a natural pit, holding sand that will later be placed on the beach. The process will require an excavator to fill a barge anchored about 1,000 feet offshore, and then pumping the sand onto the beach via an underwater plastic pipe. More than 2,000 cubic yards of material can be distributed on shore with this process.

After the sand is delivered to the beach, bulldozers can then spread the sand to evenly distribute it. There, darker harbor sediment can dry and be bleached by the sun.

The beach area targeted first is between Topaz jetty and Ruby Street. Over the years the amount of beach area has greatly deteriorated. About 75,000 cubic yards is scheduled to be placed along the coastline.

In 1999, around the time of the last harbor entrance sediment removal project, Topaz Beach measured approximately 180 feet, from the water’s edge to the bike path. It is about half as wide today, with some areas measuring less than 60 feet wide.

At the completion of the sand replenishment, project organizers are estimating the Topaz Beach area to be around 100 feet wide, but the narrow areas near Ruby Street will remain. Due to the natural currents and tides, officials expect the sand to naturally be pulled down toward that area to fill in the narrower spots. Redondo Beach city engineer Steve Huang said the city has been preparing for the project for some time and mailed letters to roughly 150 residents alerting them of the planned activity. Lights may be visible at night, and the new beach sand could initially have an odor, he said. “When you first pump the sand through the water (and) onto the beach, it’s black in color and a little bit smelly — fishy,” Huang said. “Different people have different perceptions of it.”

Depending on tides, larger vessels entering or exiting the harbor are often limited to the channel’s north entrance, as sediment buildup over the years has continued to impair harbor navigability.

Los Angeles County Lifeguards receive numerous calls each year reporting vessels running aground at the Marina del Rey harbor entrance, which was last dredged in 1999. Since then, more than 1 million cubic yards of sediment from the surrounding beaches and Ballona Creek has settled around the channel entrance, making many recreational boaters’ trips in and out of the harbor a stressful activity.