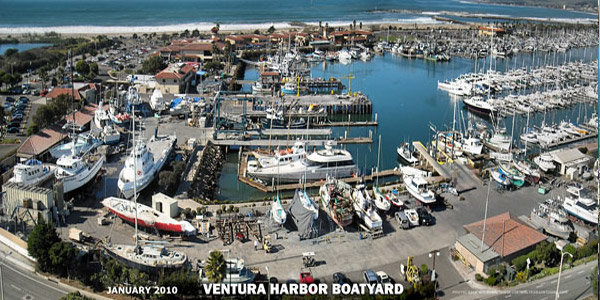 An allision involving a fishing vessel, sailing boat and boatyard travelift was caused by the failure to properly fasten a transmission control cable, the National Transportation Safety Board (NTSB) determined in a recently released report.

The transmission control cable not being properly fastened with a valve shift lever, as per manufacturer recommendations, was determined to be the probable cause of Ferrigno Boy striking Ventura Boatyard’s travelift and sailing boat Solera in 2015.

Ferrigno Boy was a commercial fishing vessel and had arrived in Ventura Harbor to offload 13 tons of squid. The boat’s captain navigated into harbor and attempted to approach the pier for docking, according to the NTSB report.

“[The captain] made a wide turn in order to pass near the end of the pier and thus provide enough maneuvering room to turn the bow away from the berth before backing down. The captain positioned the throttle in reverse and increased the main propulsion engine RPMs to slow the forward movement of the vessel as it continued to turn to port,” the NTSB report stated. “After making this maneuvering change, the captain instantly realized something was wrong because the vessel accelerated in the forward direction and there was a lack of prop wash along the side of the hull that would have been produced by the astern thrust from the propeller.”

Interviews during the investigation revealed the transmission was replaced a few months before the allision.

“Although a company representative was present during the installation of the new engine and transmission, neither the owner nor the company representative knew the exact method or type of securing device, such as a lock washer, locknut, or double-nut, that was used to refasten the existing control cable ball joint to the new transmission’s mechanical control valve,” the NTSB report stated. “Likewise, the captain and crew did not know how the ball joint was secured to the control valve lever prior to the accident.”

NTSB released the Ventura Boatyard incident as part of its Safer Seas Digest 2016 report, July 27 – almost two years to the date of the Ferrigno Boy allision; the commercial fishing vessel struck upon the travelift and sailing vessel on July 29, 2015.

Such incidents are analyzed and published, according to the NTSB, to prevent future allisions or collisions, be it in a harbor or open ocean or elsewhere.