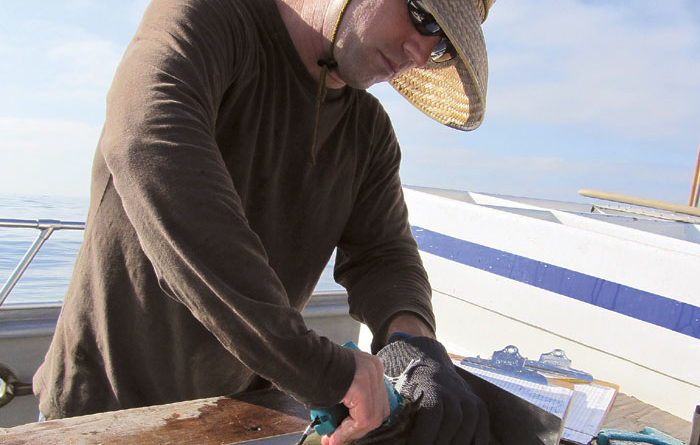 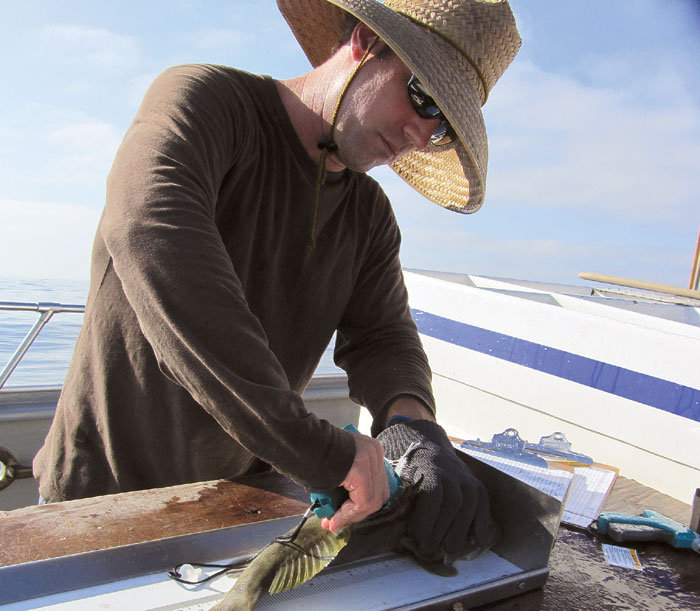 Lyall Bellquist — a graduate student from the University of California, San Diego Scripps Institution of Oceanography — talked to The Log about the new regulations and his involvement in the Coastal Angler Tagging Cooperative, a project that is tagging saltwater bass in California as part of an important research program to determine the health and numbers of this key species.

Bellquist, a Ph.D student who grew up in San Diego fishing, diving and surfing, decided to pursue a career in marine science, obtaining a Bachelor of Science degree in aquatic biology at the University of California, Santa Barbara in 2002. From there, he worked for UCSB as a research technician for two years in both the U.S. Virgin Islands and Southern California.

He then earned his Master of Science degree working with Chris Lowe at California State University, Long Beach in 2006, focusing on movement patterns of fishes off Catalina Island as well as offshore oil platforms. After graduating, he worked at Hubbs-SeaWorld Research Institute, focusing on assessment of the white seabass stock enhancement program.

All the while, he has been following the imposition of California’s network of MPAs. In December 2012, the California Department of Fish and Game announced that the final wording of regulations to implement the MPAs in California’s South Coast Region had been approved by the state’s Office of Administrative Law (OAL). The regulations closed approximately 15 percent of California’s coastline to recreational fishing.

The no-take zones in Southern California waters are scattered in wide areas ranging from Point Conception to the Mexico border.

The Log: Tell us about your work with the Coastal Angler Tagging program.

Lyall Bellquist: “In 2009, I began the Ph.D program at Scripps, where I am currently conducting a historical analysis of a new large-scale recreational fisheries database. I am also working with Brice Semmens to conduct a cooperative tag-recapture project, which focuses on population abundance, mortality and movements of three of the post popular recreational sportfishes in California: kelp bass, barred sand bass and spotted sand bass.” (Information is online at cooperativefishtagging.org.)

The California Fish and Game Commission — which many anglers have pointed out is a partisan, politically appointed body — has been instrumental in closing a number of the state’s best saltwater fishing grounds. What effect have these closures had on the fisheries and the stocks of certain species?

“The closures in the Northern Channel Islands that were implemented back in 2003 have begun to show more and bigger fish inside the reserve boundaries. Whether or not this has translated into improved catch for recreational anglers in adjacent ‘fishable’ areas remains to be seen. This is the subject of current ongoing research.

“The Marine Protected Areas that were implemented along the mainland coast are probably still too young to have a measurable effect on fish populations (they’re just over one year old). I expect that it will take about five years before we start to measure any differences in populations.

“However, the fisheries (i.e., everything related to the fishing for a particular species in a particular area) involved in each marine region of California have been affected, because there are fewer places where people are allowed to fish.

“To what degree they have been affected is a question that still needs to be answered. The short-term effects may be negative for some anglers or sportfishing vessel operators, but the science indicates that the long-term effects will translate into improved fishing opportunities.”

Is the effect the same, greater or less for sport anglers vs. commercial fishermen?

“This really depends on the species being targeted and the particular MPA in question. Some species are allowed to be taken inside certain ‘State Marine Conservation Areas.’ Sometimes recreational take is allowed, but commercial take is not allowed.

“The bulk of commercial fisheries in California focus on invertebrates (market squid, spiny lobster, urchin, etc.) rather than fish, but these fisheries are still affected by MPAs.”

What effect has this had on anglers being able to fish for whatever species they wish to seek out?

“Generally, MPAs lead to anglers shifting their fishing efforts to alternative locations. They can still target the same species, but the area they have to choose from has decreased.”

What is the makeup of the Fish and Game Commission? Who is driving the decisions being made — and what is the process?

“The general public and scientists provide information for the California Department of Fish and Wildlife (formerly Fish and Game) about local fisheries. The DFW then compiles all known information and presents it to the commission.

“The commission allows public comment and then makes a decision about regulatory action or inaction. To my knowledge, the commission itself is made up of industry representatives from throughout the state.”

Tell us about the bass tagging program you are presently involved in. What are you attempting to learn — and how can that data be used for the good of kelp bass, barred sand bass and spotted sand bass populations?

“The Coastal Angler Tagging Cooperative is a research project that was funded by Collaborative Fisheries Research-West (cfr-west.org) last summer, and it will continue through the summer of 2014. Our goal is to involve the fishing community and conduct cooperative, transparent science that will produce data that is essential for management of local saltwater bass fisheries — which include kelp (calico) bass, barred sand bass and spotted sand (bay) bass.

“We are conducting a tag-and-release project to measure population size, mortality and movement patterns of all three bass species — primarily in the San Diego coastal area from Imperial Beach to La Jolla, but we recently started tagging in Long Beach and Orange County, as well.

“We charter local three-quarter-day sportfishing boat trips and invite anyone to come out for free on ‘tag-and-release-only’ trips. Just go to our website — cooperativefishtagging.org — and send us your email address.

“I’ll send out an email to everyone, as soon as we get a trip scheduled on the books. I’ll also post charter updates on our Facebook page, under Coastal Angler Tagging Cooperative.

“You can also download our free cellphone app — Catch Reporter — on any smartphone, which will allow you to upload your recapture information directly to our tagging database. I’ll then enter you in our monthly raffle for a $200 gas card. That’s just our way of thanking people for reporting a tagged fish, if they catch one.”