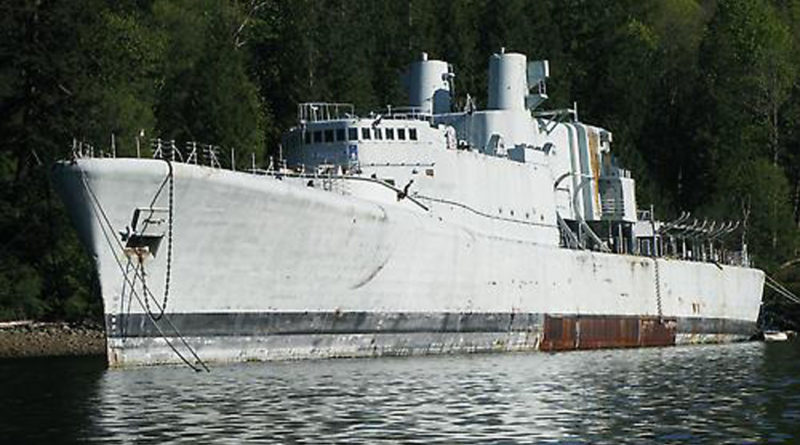 MISSION BAY—Daring divers looking to survey the San Diego Underwater Recreation Area off Mission Beach may soon have another vessel to explore.

In an 8-1 vote on July 1, the San Diego City Council approved a proposal to sink a decommissioned Canadian Navy destroyer. The HMCS Annapolis, a 366-foot boat, could become the second ex-Canadian ship to be sunk at the artificial reef.

The process still needs final approval from the California Coastal Commission to move forward. If given the green light, a source said the vessel would be transported to San Diego in October but would not be sent to the ocean floor with explosives until the end of March or early April of 2015.

“They had a project up there to sink her and they ran into issues with permits, issues with their inspection of the ship and lawsuits from Not In My Back Yard folks as to where they wanted to put it down,” said Eleanore Rewerts, the executive director of California Ships to Reefs. “There was just no way they could complete the project.”

Rewerts’ organization, which aids in establishing a regional system of ships along the California coast, is attempting to acquire Annapolis and tow it to San Diego. She said with concerns over leaving the ship in Canada over the winter, the towing process, which will take 10 to 14 days, must begin no later than October 15.

But first the ship must be purchased.

“We are waiting for the admiralty court to order a judicial sale, where essentially it’s going to go to the highest bidder.” Rewerts said. “We will bid on the vessel and that could range anywhere from $20,000 to $100,000 depending on other bids that may be tendered.”

Rewerts said the entire project will cost a little more than $1 million, which is significantly less than if a ship owned by the U.S. government were to be obtained.

Once acquired, the ship would need to be inspected by U.S. and Canadian officials. If it passes, the vessel would then be dry docked for cleaning to ensure it meets all Environmental Protection Agency (EPA) guidelines.

The project could get funding from federal and state grants currently available, Rewerts said. She added that four or five companies in San Diego have expressed interest in potentially paying for the entire project if they receive the naming rights to the reef.

California Ships to Reefs reefed San Diego’s first sunken vessel, HMCS Yukon, in July of 2000. The group said that the vessel has injected about $4.5 million per year into the local economy.

“This is very good for the local economy, especially the beach economy,” Councilman Ed Harris said at the meeting. “A lot of people do come here to dive. They do book hotel rooms, they do pay for charter boats. This is a great edition as well as another habitat for our creatures living under the ocean. I’m very supportive of this.”