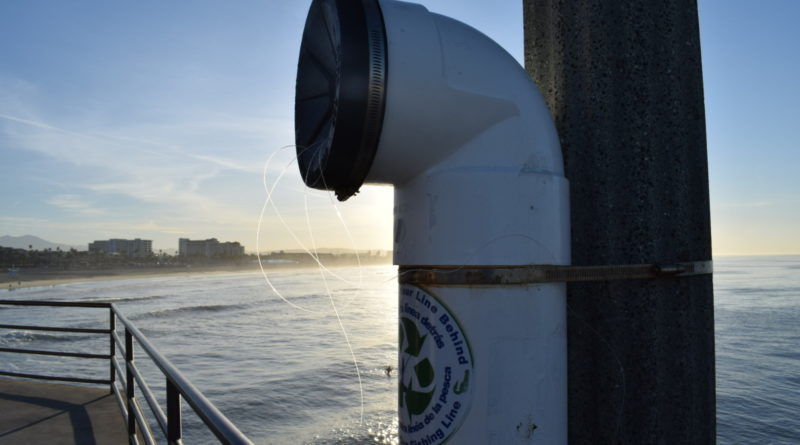 NEWPORT BEACH—Floating on the surface of the water and on the decks of piers, monofilament fishing line can harm wildlife and foul boat propellers. Sometimes even the best intentions, tossing fishing line in trash cans, can still end with curious birds entangled.

Arleigh Boykin, who fishes off Huntington Beach Pier every week, said if the trash can lids aren’t on all the way, birds can get into them – and if there’s old fishing line inside, birds can sometimes get entangled.

“I feel bad for the birds,” Boykin said.

Fishing line recycling stations have been popping up all around Southern California and anglers at Huntington Beach Pier, where four recycling stations were installed in 2017, generally seem to be taking advantage of them and hoping for more piers to add them.

“I like those there because it seems to keep the pier a little cleaner too,” Boykin said. “People aren’t just cutting their line and dropping it.”

The California Division of Boating and Waterways, California Coastal Commission’s Boating Clean and Green program, Keep the Delta Clean, Farallones National Marine Sanctuary and Boat U.S. Foundation have, since 2010, been placing containers at piers, marinas, harbors and other fishing spots throughout the state. So far they have collectively placed over 280 with almost 60 recycling stations in Orange, San Diego, Los Angeles, Santa Barbara and Ventura counties.

“I began to realize it’s a lot of waste, there has to be a way to recycle it,” Roame said.

She sought and was given approval from the city’s Parks, Beaches & Recreation Commission on Jan. 7 to build at least five, three-foot by six-foot PVC pipe fishing line containers, along with signage at popular fishing locations along the Balboa Pier. The City Council will still need to sign off.

“I was so overwhelmed with the support I got,” Roame said.

Roame has been with the company for seven years. The busy summer season brings a lot of sportfishing trips, which also means lots of fishing line. The company provides fishing gear, including the rods and line. Roame said as part of regular maintenance, they respool each rod at the end of every week and discard the old line. She said the discarded line adds up to on average 5 miles every week in the summer.

“The waste involved with the line usage was quite a surprise to me,” said Roame, who has a background in biology.

About two years in with the company, Roame began recycling the company’s old line. Roame was put in touch with a program run by Berkley Fishing, which has been a pioneer of fishing line recycling since the 1990s, in Spirit Lake, Iowa. Newport Landing mails the old fishing lines to Berkley, who works directly with the recyclers to keep the fishing line out of landfills – where it would sit for 600 years before breaking down – and waterways, where it can entangle wildlife or foul boat propellers.

The fishing line is melted down and made into things such as park benches and marine fishing habitats for artificial reefs in lakes and under piers. Berkley works with marinas, cities, counties, sporting goods companies and anyone who wants to send their fishing line. The lines collected from the DBW’s containers are also mailed to Berkley.

After recycling their sportfishing lines for several years, Roame started to think about how to incorporate the public on the project.

“I thought we could easily commit to putting some recycling containers on the pier and collect them every week,” Roame said.

She brought the idea of placing recycling containers on the Balboa Pier to company’s owners and she was given full support.

The containers will cost around $40 to make and will be funded and built by Newport Landing and Davey’s Locker. Volunteers will then check them weekly and collect the recycling content.

Roame said what they need now, is more boots on the ground to help with the collection of the recycled line. She said people have already come into the store with fists full of line to recycle, excited about the project. Anyone interested in volunteering can contact Roame via email at jessica@newportwhales.com.

Roame said she hopes this is a “legacy project,” lasting decades beyond her tenure with the company.

“My hope is that we will see fishing line recycling as acceptable and common as plastic bottles or cans,” Roame said.