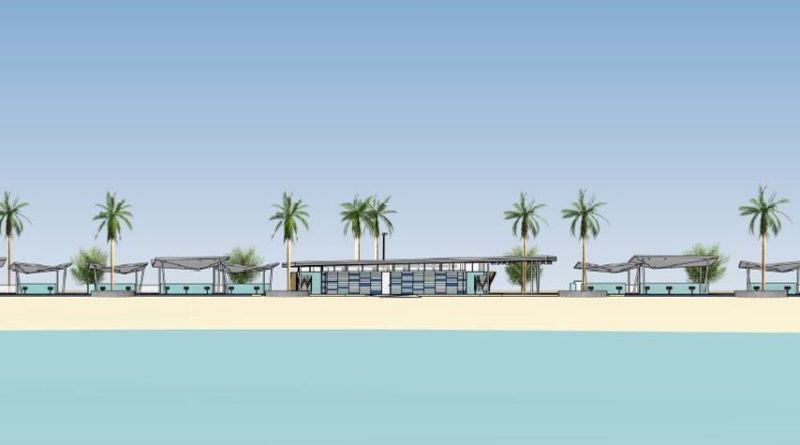 MARINA DEL REY ― Renovations are underway at Marina Beach in Marina del Rey. Design plans for the area, also referred to as “Mother’s Beach,” include a nautical theme.

The configuration of the shoreline and the activities in the water will remain the same, both Carol Baker and Nicole Mooradian from the Department of Beaches and Harbors confirmed.

“Marina Beach is located in a back basin with limited boating facilities, so there is very little boat traffic in the area,” Mooradian explained. “Nevertheless, the water at the end of the basin is cordoned off with buoys to keep boaters out.”

Baker mentioned the boat docks stop half way down the channel.

Baker also said the construction is taking place further from the shoreline. Water activities, such as swimming, kayaking and standup paddleboard yoga, will not be affected.

The revitalization of the beach area entails four phases.

The first phase involves a facelift for the bathroom facilities. New wall finishes will cover the existing exterior wall. The roof, floor and fixtures will all be replaced as well.

Temporary trailers with bathroom facilities for the public have been put in place at parking lot 11.

The redesign of the picnic pavilion structures would be the next phase, followed by the promenade. These phases of the plan include new picnic tables, grills and guardrails. New landscaping will be the final phase of the redevelopment project.

The redeveloped picnic pavilion will be designed to look like “sails in motion,” Mie Joness, the planning specialist with the Department of Beaches and Harbors, said at the Oct. 11 Small Craft Harbor Commission meeting.

“The pavement is colored…textured concrete with this wave-like pattern. It almost looks like a wave coming in from the ocean into the picnic area,” Joness added.

The Design Control Board approved this project on Feb. 17, 2016.

The planning team went to work on putting plans together for a new design.

Los Angeles County’s Board of Supervisors approved the design plans nearly a year later on Jan. 17, 2017.

A “Notice to Proceed” the first phase of the plan was issued on March 21, 2017.   “However, we did not want to start the construction until the summer season was over,” Joness said. “So between March and September we were just doing the preparation work.”

Construction on the waterfront began on Sept. 6. The beach remains open to the public.

“To accommodate beachgoers, we have moved the picnic tables onto the sand and installed access mats to temporarily replace the walking path,” Mooradian stated.

The projected completion date, according to the plan, is May 21, 2018.

The popular family-friendly beach with no waves would be renovated by summer of 2018, if work moves forward as planned and there aren’t any delays.

“This project is a much-needed update to our facilities at Marina Beach, and we’re very excited to see it move forward,” Mooradian concluded.