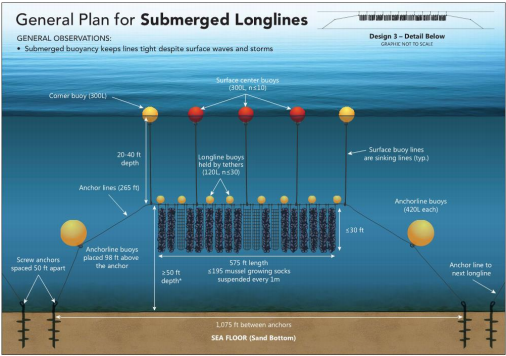 The assessment document was just one of several regulatory hurdles for a proposed shellfish aquaculture farm in federal waters near Ventura Harbor.

VENTURA—The Ventura Port District has completed a Navigation Risk Assessment as part of a permit application for the Ventura Shellfish Enterprise (VSE), a proposal to establish an aquaculture farm in federal waters near Ventura Harbor.

The VSE project hopes to create a 2,000-acre commercial bivalve shellfish aquaculture operation where the private sector could sub-permit 100-acre lots to grow Mediterranean mussels. The project is a partnership between the port district, Coastal Marine Biolabs, The Cultured Abalone Farm, and Ashworth Leininger Group.

The Port District Board of Port Commissioners, on July 15, voted to submit the risk assessment to the USCG.

COWI, the consulting group which completed the risk assessment, presented the draft and collected public comments at the July 1 Port District Board of Commissioners meeting. A recap of the assessment was presented at the Board of Port Commissioners meeting on July 15 as well as responses to comments received on the analysis. The purpose of the Navigational Risk Assessment was to provide the USCG information on the vessel type and waterway use near the proposed aquaculture locations, waterway characteristics, the risk of collision as a result of the aquaculture project, additional navigation considerations and potential mitigation measures.

The assessment stated all those risks were low or negligible.

“We were able to conclude the risks associated with this project were low, not to say they aren’t there, just to say that they were evaluated as low,” Maria Grønnegaard from COWI said at the July 15 meeting.

COWI also provided a list of additional mitigation efforts that could be implemented to further reduce risks including speed restriction, an exclusion zone prohibiting third party vessel traffic unrelated to project construction and operation inside the project site, AIS on project vessels and increased communication to the local maritime community.

The Navigational Risk Assessment drew 16 comments, which COWI officials said fit into five different themes: support of the use of smart buoys and E-navigation equipment, concern of exclusions zones and people noting that was not preferable, over reliance on AIS data in the risk assessment, concerns additional trips from Ventura Harbor to the project area and back will increase potential for collisions and groundings and concerns of commercial vessel gear entanglement with aquaculture equipment.

The Board of Port Commissioners ultimately voted 3-1 to send the Navigation Risk Assessment to the USCG and other regulatory agencies as necessary. They also voted to direct staff to draft a cover letter inviting discussion with USCG and showing support for providing additional communication with mariners and requirements for AIS on project vessels as additional mitigation efforts.

“The Coast Guard asked for it and to sit on it I think would frustrate our process,” said Commissioner Everard Ashworth.

The Port District, with one hurdle out of the way, still has several others to address before the project can move forward.

The Port District Board of Commissioners received an annual status report on the project at the July 15 meeting, which is required as part of their California Sea Grant. The Port District received a two-year California Sea Grant in 2018 totaling $266,660 to help complete the permitting process, environmental review, shellfish sanitation, mussel grower selection and training processes.

Port district staff requested a one-year, no-cost extension of the grant to complete the tasks, with the staff report noting additional work is needed to complete all those tasks.

One of the biggest challenges is a dispute with the Ventura County Local Agency Formation Commission (LAFCo). LAFCo, In the fall of 2018, contacted VPD to obtain information on the VSE project. LAFCo’s concerns related to the fact that the project was to be located outside the existing territorial boundaries of VPD and LAFCo did not have authority to approve the project. The Corps has paused its consideration of the VSE project pending resolution of the issue. The port district reported discussions with LADCo are ongoing.

Meanwhile, Marine Biolabs (CMB) and The Cultured Abalone (TCA) continue to work on food safety and shellfish sanitation. CMB and TCA in February began deploying mussel sentinel lines in the Santa Barbara Channel to test for Food & Drug Administration safety requirements. The data collected from test lines will inform the design of the Biotoxin Monitoring and Contingency Plan and potentially minimize the amount and cost of testing imposed on shellfish growers by the FDA.