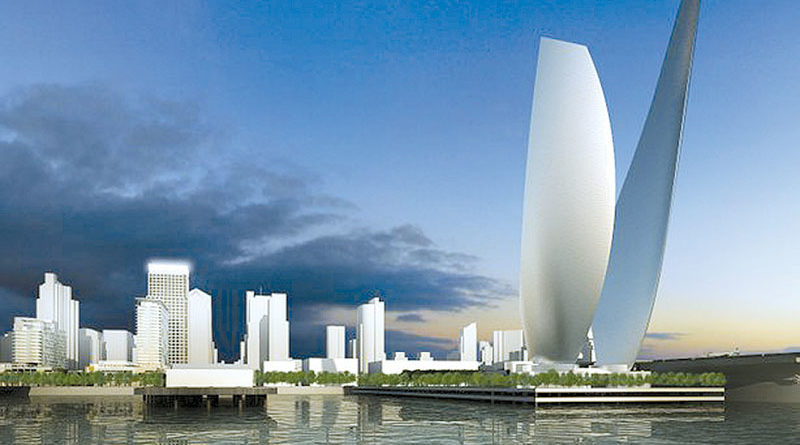 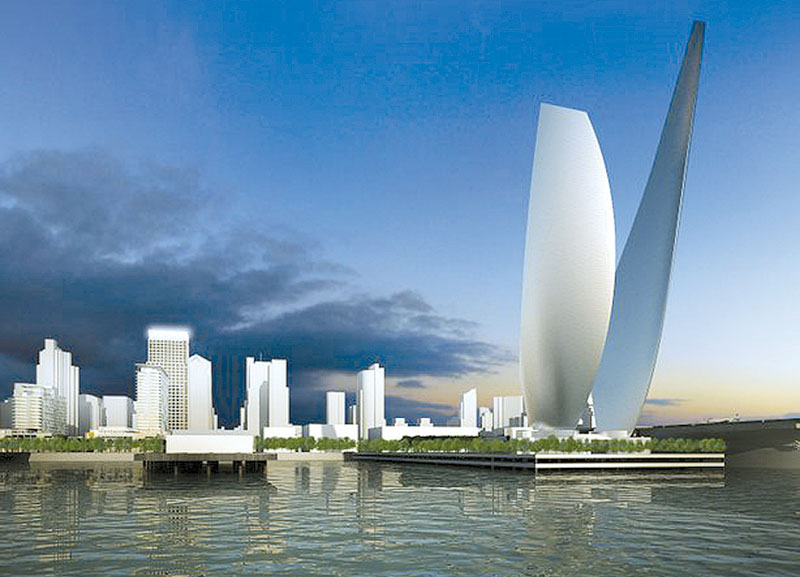 SAN DIEGO — San Diego’s Board of Port Commissioners looked at many of the components involved in the Port Master Plan for the bay’s North Embarcadero region at its Feb. 14 meeting, and commissioners further discussed what the proposed park at Navy Pier would look like.

The park is being proposed by USS Midway Museum representatives, as part of their mitigation effort mandated by the California Coastal Commission in allowing the retired aircraft carrier to be docked alongside Navy Pier.

The pier currently houses a dilapidated Navy building and serves as the parking lot for the adjacent museum. But in order to meet the Coastal Commission’s requirements, the site must be turned into a park for public use, to compensate for the waterfront views lost by having USS Midway docked near Harbor Drive.

In addition, the plan called for an “iconic structure” at the pier’s end, with local businessman T. Denny Sanford pledging $35 million in funding toward the $68 million park for a 500-foot “Wings of Freedom” sculpture and an amphitheater that would become the new home of the San Diego Symphony’s Summer Pops concert performances.

But before the project can take off, its “Wings” might be clipped. Port commissioners expressed concern that the Coastal Commission would balk at the proposal for a large sculpture, and some said it could jeopardize the other components involved in the Port Master Plan amendment that still requires Coastal Commission approval.

“What I don’t see happening — in any way shape or form — is the so-called ‘Wings of Freedom,’” said Commissioner Lee Burdick. “I cannot accommodate in my mind how we are going to rationalize that they are consistent with our commitments under the Coastal Development Permit and the commitments that we made in the North Embarcadero Visionary Plan Phase 1 approval. I cannot get my mind around it.”

The Port Master Plan Amendment for the North Embarcadero region includes the realigning of Harbor Drive to make room for a public promenade, the 205-foot Lane Field setback park, a park along the waterfront adjacent to Holiday Inn, the Navy Pier park plans, changes to the B Street Pier and Cruise Ship Terminal, a proposed hostel along Grape Street and the creation of Grape Street Pier.

While discussions arose on many of the topics, public comments and commissioners’ statements focused on the Navy Pier project.

Since its unveiling last year, Midway’s proposal for the park, parking lot and sculpture has been discussed in public outreach meetings, and the port’s Citizens Advisory Committee viewed the proposal, as well. Committee member Diane Coombs said Midway’s original environmental impact report (EIR) that contained plans for a ground-level park was good enough.

“We are very much in support of implementing the existing Coastal Development Permit for Navy Pier,” Coombs said. “I’m not sure why a project that will probably never get through the Coastal Commission is being added to the EIR.”

Despite the concerns, commissioners directed port staff members to study both options for the park — the ground level option and the raised park with the iconic sculpture intact — along with a third option that would examine a below ground-level parking deck, allowing the park to be created alongside Harbor Drive, without impeding views.

The ends of the two parks mark the entrance to San Diego’s Marriott Marina, adjacent to the hotel and convention center. With its close proximity to USS Midway, Burdick said the structure could appear to clutter the waterfront, but the open areas at both Embarcadero parks could accentuate the sculpture.

“Architectural elements need space to be appreciated,” Burdick said. “Go to the St. Louis (Gateway) Arch, and you’ll see that it sits out on a landmass, where you can appreciate magnitude of architecture.”

Following her comments, Commissioner Dan Malcolm reminded the board that a large donation had been pledged toward the sculpture, and that it is something the port should keep on the table.

“This was originally proposed by a very well-known local with a $35 million donation,” Malcolm said. “That’s almost half of the cost of the Navy Pier project. So, I think that with that kind of donation, we at least need to put it into our alternatives and be looking at that.

“It may well be that Mr. Sanford would look at alternative locations, and we would certainly want to work with him.”