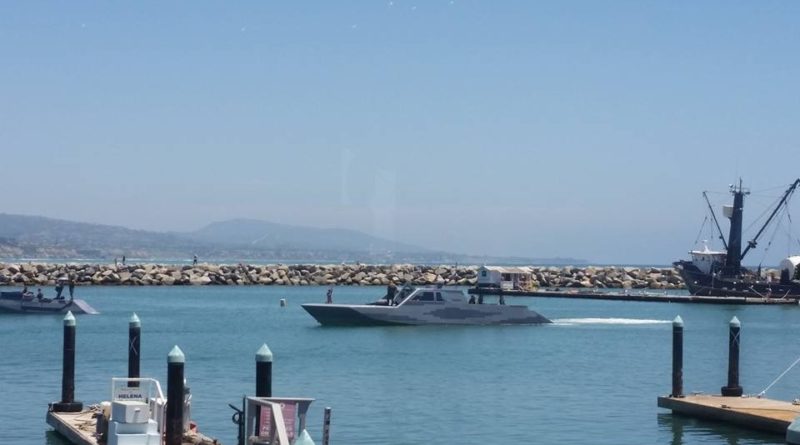 Editor’s Note (8/4/17, 9:10 a.m.): Good morning. We are aware of recent reports stating military vessels spotted at Dana Point Harbor were part of the U.S. Navy SEALS fleet. We’re doing our due diligence to update the story on our end. The updated story will be featured in our next issue, which publishes Aug. 11. The information we presented was based on information provided to us, through a series of emails and phone calls, from confirmed military sources we reached out to prior to this story (and its photos) were published. In the interest of transparency we will maintain the story below as originally reported – with honest updates in upcoming coverage. Thank you for your understanding.

DANA POINT — Nordhavn’s Justin Zumwalt caught some post-Fourth of July fireworks on the water in South Orange County as a pair of Mexican Navy stealth vessels visited Dana Point Harbor. These boats might have been moving around out in the open for all to see, but no one really knew why these vessels were visiting Dana Point Harbor in the first place.

At least three agencies – O.C. Parks, Orange County Sheriff’s Department and U.S. Coast Guard – had no information available as to why these two vessels were in Dana Point, let alone their agency of origin. There were also threads online about these two vessels, with some surmising they were actually part of Mexico’s Navy. Even others pondered whether the Department of Homeland Security launched a pair of immigration enforcement vessels.

The Log was eventually able to confirm both vessels were indeed part of the Mexico Navy fleet, as a few people on the internet guessed.

The Mexican Navy often works with its U.S. counterparts north of the border, conducting operations in Dana Point and other Southern California harbors – although we remain unable to determine why the maritime branch of the Mexican military visited South Orange County’s only recreational harbor.

A member of the Nordhavn team sent The Log photos of these two vessels on July 12.