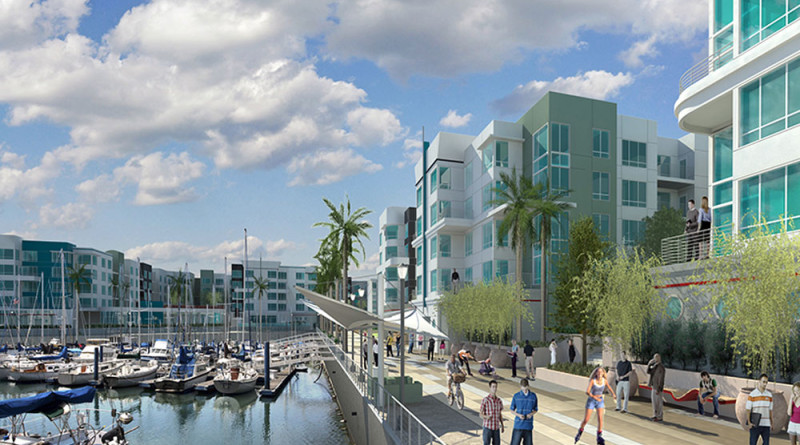 December 26, 2015
LOS ANGELES — A project proposing to build 400 new apartments and a 161-slip, seven end-tie marina in Marina del Rey earned the support of Los Angeles County’s Board of Supervisors on Dec. 1.
Supervisors unanimously voted in favor of granting Legacy Partners Residential, Inc., a series of options extensions to facilitate the redevelopment of Neptune Marina Apartments, which is located at Via Marina and Marquesas Way in Marina del Rey. Legacy Partners plans to demolish the existing 136 apartment units, 182 boat slips and eight end-ties, according to county staff.
A draft of the Environmental Impact Report (EIR) circulated in 2008 said the new marina would be able to accommodate modern boat designs. Boats up to 40 feet in size would be able to navigate the marina, according to the draft EIR. The new boat slips would be American with Disabilities Act (ADA) compliant and meet Cal Boating safety requirements.
New public docks, a transient/water taxi slip and a public wetlands park are also part of the proposal; Legacy Partners agreed to cover half of the costs for the park, county staff said. County staff stated in a report to supervisors Legacy Partners will spend at least $164.5 million to redevelop the two parcels associated with the project.
“This is a project that represents more than a $255 million investment. It will help fund the Wetland Park. It would provide 81 affordable housing units,” Tim O’Brien, a Legacy Partners representative, told supervisors.
Robert Calleja, who also addressed supervisors on behalf of Legacy Partners, said the project will fulfill its requirement to pay employees prevailing wages.
While the developer touted the project’s affordable housing and prevailing wages plans, Fairwind Yacht Club Commodore Richard Windebank said the redeveloped Neptune Marina Apartments would improve public access to the water.
“When [Legacy Partners] develops a marina, they designate a number of slips to affordable boating,” Windebank said, adding the project would help Fairwind YC provide middle- and low-income families with access to Marina del Rey.
Those opposed to the proposed project were concerned about the construction of the wetlands park. Nancy Vernon Marino of We Are Marina del Rey, for example, told supervisors she believed Legacy Partners’ offer to foot half the bill for the park functioned as a bribe.
There are multiple parcels associated with the project; each parcel comes with its own lease. Supervisors approved the options on each lease be extended so Legacy Partners would be able to move forward with the project. Environmental documents were also approved by supervisors.
The project was also endorsed by the Small Craft Harbor Commission on Nov. 10. Commissioners previously heard and supported the proposed project in January 2008 and August 2011.
Redevelopment of Marina del Rey has been major topic in recent months. Anchorage 47 is currently being upgraded and county supervisors recently approved projects improving boater amenities.