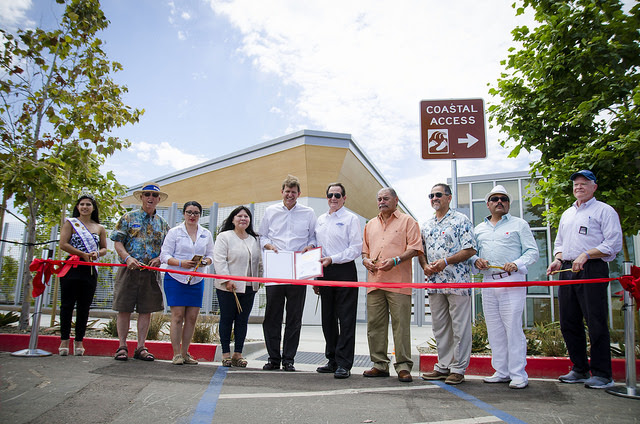 NATIONAL CITY — The city of National City and the Port of San Diego on June 18 celebrated the grand opening of a new recreational amenity on San Diego Bay, the National City Aquatic Center.

The 4,700-square foot facility is located in Pepper Park, on the National City waterfront. It includes two multi-purpose classrooms, storefront/office space, locker rooms with showers and restrooms, and boat and equipment storage.

Community Rowing of San Diego will be operating out of the Aquatic Center throughout the summer, offering rowing camps for middle and high school age students. At the event, Community Rowing presented Olympic rowing demonstrations on both land and water.

Since 2004, the Port and the City of National City, through its former redevelopment agency, worked in partnership to develop the Aquatic Center on Port tidelands. The Port was initially going to contribute $830,000, but in 2011, the State of California’s Department of Finance put a hold on the use of tax allocation bonds, which would have been the city’s funding mechanism for the project. The Port of San Diego contributed approximately $4.4 million from its Capital Improvement Program for construction to move forward and the city paid for the remainder.

The opening of the National City Aquatic Center helps expand public access to the waterfront, one of the goals of the Port and the city, and it complements the Balanced Land Use Plan for the National City Marina District. Construction of the Aquatic Center began in August 2013 and its total cost was $5.3 million. Designed by Safdie Rabines Architects, it was built by EC Constructors Inc., with construction management provided by Project Professionals Corp.

One thought on “New Aquatic Center opens in National City”