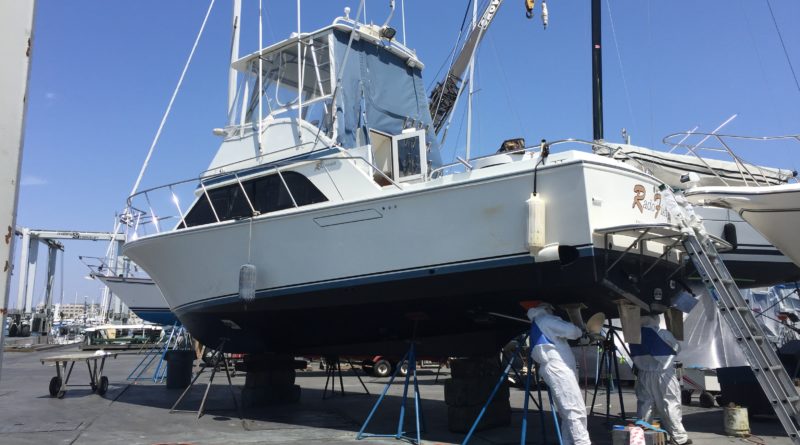 Division of Boating and Waterways Commission and Department of Pesticide Regulation discuss future of anti-fouling paints.

SACRAMENTO — Strict regulations governing the use of copper on recreational boats are set to go into effect July 1, according to a Department of Pesticide Regulation (DPR) presentation to the Division of Boating and Waterways (DBW) Commission meeting in Sacramento on May 10.

Aniela Burant, an environmental scientist with DPR, updated commissioners on a new California regulation – 3 CCR Sec. 6190 – on copper-based anti-fouling paints and coatings. The regulation states recreational boats cannot be registered with the state if they have a leach rate of 9.5 micrograms per square centimeter per day.

“The Department of Pesticide Regulation … has regulatory authority over this because the copper in antifouling paints is considered a biocide, which is a pesticide,” Burant told commissioners.

Burant added the new regulation would not apply to commercial vessels, such as passenger ferries, excursion boats, tugboats, fishing boats and military vessels. The regulation, however, does not require hull-cleaning management.

Boaters will still be able to use certain antifouling paints so long as they are registered under 3 CCR Sec. 6190. There are 91 permissible anti-fouling paint products listed within this regulation, according to Burant. Category 1 was last updated on July 20, 2017.

– Hull cleaning be done no more frequently than every four weeks

– An increase boater awareness and acceptance of AFP alternatives

– The establishment of site-specific copper objectives for certain marinas and harbors.

Paint manufacturers, according to Burant, must also be registered with DPR and submit new data to the agency if they fall into one of three categories: they introduce a new product; they amend their current registration (i.e., change paint color or active ingredient concentration); or, a registration is amended to allow the product to be used on recreational vessels.

Both DPR staff and DBW commissioners expressed a concern of boaters obtaining bottom paints, in violation of California’s new regulations, from Mexico, Nevada or elsewhere out of state, Burant added.

“What is the environmental impact of copper as a biocide in marinas? What sort of lives are affected? Where is our environment impacted by having high concentrations of copper in a marina,” Metz asked Burant.

The DPR scientist replied by stating copper is toxic to certain aquatic organisms toward the bottom of the food chain.

Katherine Pettibone, the commission’s vice chair, asked why the impending regulation only focuses on recreational vessels (and, for now, exempts commercial boats).

“Recreational boats are often in the marinas for long periods of time, and, therefore, a lot leaching is occurring in that marina and causing water quality issues,” Burant replied. “Many of the commercial boats are not in those marinas for long periods of time, because they are often out. Marinas are designed where there is not a lot of flushing.”

Pettibone continued to question Burant as to why commercial vessels could not be included within the state’s new regulatory scheme, as a matter of addressing toxicity.

“We found they are not causing the water quality issues as much as the recreational boats,” Burant responded.

Nan Singhasemanon, who works in DPR’s Pesticide Programs Division, added the U.S. Navy did perform its own studies and found a high concentration of copper near the hulls of the big ships. He added copper levels would always be high within a few feet of a boat hull, regardless of boat type. DPR, instead, studies water samples in the main channel or away from marinas – and the data found there generally shows higher levels of copper emanating from recreational boats, Singhasemanon said.

Burant added the state’s goal to reduce copper in its marinas is a long-term play and changes won’t happen overnight.

“It takes time,” Burant said. “We understand these paints are on boats for years and boatyard capacity for turnover is limited. We’re not expecting to see changes in California marina copper concentrations overnight. This is a process and we all need to work together.”

“It seems that there’s a lot of different interests, whether they be environmental or political or whatever,” Short said. “It’s very confusing to the boater to figure out what to do. Many of us known many boaters that have tried various products, that want to do the right thing, whatever that might be, but find it very confusing to figure out what is the right thing to do.”