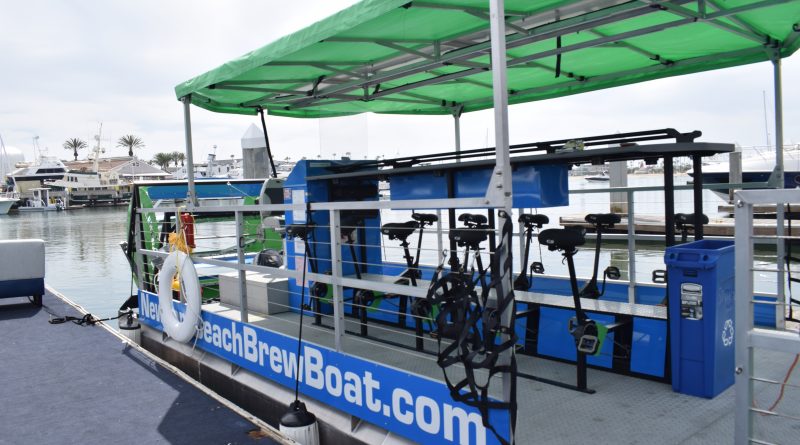 “I love being out on the water just as anyone else does and I love being around people and I feel like this is a fun way to do both and explore my entrepreneurship goals,” said Michael Kapusta, one of Newport Beach Brew Boat’s owning partners.

The recently launched business offers 90-minute tours of the harbor for up to 16 passengers. Docked behind the Peninsula Kitchen and Bar at 2406 Newport Blvd, the bright green and blue cycle boat features a large peddle wheel in the back, which is human-powered by 10 peddle seats onboard. The boat is also equipped with a small motor for when passengers get tired of peddling. The 31-foot pontoon cycle boat is modeled after the land-based pedal taverns popular in many cities.

The brew boat supplies a captain, who is certified with a U.S. Coast Guard Master Captain License and one deck hand, who according to the website, makes “sure you have a cold beverage in your hand at all times.”

The boat does not provide drinks or food, but passengers can bring their own beer, wine, cider or canned cocktails to drink while cruising the harbor. Due to Covid-19 related regulations, right now, passengers can only book a private tour, but the brew boat will eventually also offer public tours, where individuals can pay per seat.

“It’s meant to be fun, interactive, unique,” said Kapusta. “It’s something different, there’s nothing like it in Orange County.”

“They were looking to expand their business down into Southern California and it was kind of just a perfect match,” Kapusta said, who runs most of the daily operations in Newport Beach Harbor.

Ferren-Cirinio and See have been operating Sac Brew Boat for about three years; they now have two boats operating on the Sacramento River. Ferren-Cirinio said they were connected to Kapusta through the boat builder.

“So we just kind of discussed his operation and what it would kind of take to get going and he was asking me for some advice, which I was just happily there to give him,” Ferren-Cirinio said over the phone.

He said eventually the discussions evolved into a business partnership and friendship.

There are cycle-powered boats in major cities across the U.S. including New York, Florida, Chicago, Cleveland and Oregon, but Newport Brew Boat is the first operation in Southern California.

The business partners have been working on getting permits and the operation up and running since July 2018; Kapusta and Ferren-Cirinio presented to the Newport Beach Harbor Commissioners in November 2019. Newport Beach Brew Boat took the first tour out over the Memorial Day weekend and is now officially open for bookings.

Newport Beach Brew Boat, along with all other businesses, is navigating the new “normal” brought about by the Covid-19 pandemic. Kapusta said it has been challenging to open a business during this time, but they have been able to successfully run tours with safeguards in place.

“We’ve restricted our capacity, we have our crew wearing masks, we have a giant screen up there for our captain, we want to social distance as much as possible,” Kapusta said.

Kapusta said they also provide hand sanitizer onboard and they spend extra time disinfecting the boat after each trip.

Covid-19 is not stopping water lovers from getting out; Kapusta said during these first few weekends of operation, the harbor has been packed.

“I’ve heard people say that there were as many boats out there as Fourth of July last year,” Kapusta said.

Both Kapusta and Ferren-Cirinio said they hope to eventually expand in Southern California and add more brew boats.

“I always saw myself owning a business that was always the goal,” Kapusta said.