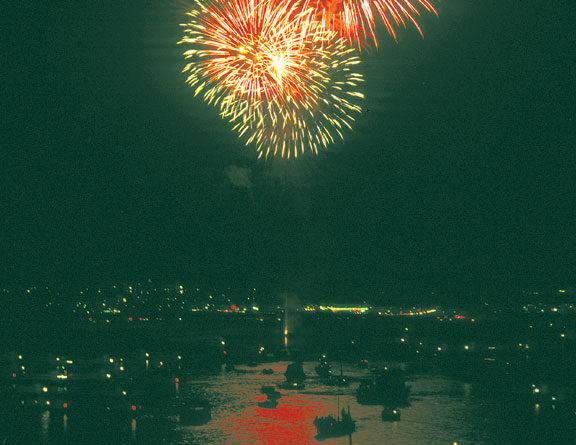 While New Year’s Eve celebrations in many parts of the country often involve gathering indoors to watch a Times Square ball drop, Southern California boaters fresh off their holiday boat parades can enjoy waterfront fireworks to ring in 2012.

In Marina del Rey, boaters will be treated to a brilliant display of fireworks that will light up the sky Dec. 31. The five-minute show will begin with a 30-second countdown to midnight. The fireworks will be shot off the south jetty and can be viewed throughout the marina — but no anchoring is allowed.

The best locations for viewing are near Fisherman’s Village and Burton Chace Park. For landlubbers, parking is available for a minimal fee in Los Angeles County lots.

The fireworks are presented by Zambelli Fireworks Internationale, a company that originated more than 100 years ago in Italy and is known worldwide for spectacular productions. For additional information about the New Year’s Eve Fireworks, call (310) 670-7130.

In Long Beach, boaters can enjoy two fireworks shows: one for the early birds, celebrating the East Coast New Year’s at 9 p.m.; and an additional show to start at midnight. Both fireworks displays will last about 10 minutes and will be set off from Rainbow Harbor’s lighthouse peninsula.

Prior to the fireworks shows, Downtown Long Beach associates have put together a collection of New Year’s Eve activities that will begin with a family friendly event at 5 p.m. in the waterfront amphitheater at Rainbow Harbor. Roaming magicians, face painters and balloon artists will be on hand, and local live bands Them Novus and CPO & the SAPS will perform. A trackless train will offer free rides along the esplanade between the Aquarium of the Pacific and Shoreline Village.

After the 9 p.m. fireworks, the party will move over to Pine Avenue, where the festivities will continue with dancing in the street until the West Coast New Year arrives. For more information on the Long Beach New Year’s Eve festivities, call (562) 436-4259 or visit dlba.org.

For the third year in a row, the San Diego Bay New Year’s Eve Fireworks show put on by the San Diego Port Tenants Association has been canceled, with organizers citing environmental permitting issues. In 2009, an environmental group demanded that permits be required for the show.

“There’s a lot of money required for all of the testing, lab fees and so on to get an individual permit for a show,” said Sharon Cloward, president of the San Diego Port Tenants Association. “We’re hoping the Port of San Diego will take the lead and work to get a general permit in the future that will cover all port tenants’ fireworks shows and planned events.”

Until then, boaters can celebrate an early New Year’s Eve by heading to Mission Bay for SeaWorld’s fireworks show, scheduled for 7:50 p.m. The pyrotechnics display will immediately follow the “Shamu’s Christmas” show and will last for about five minutes, lighting up the sky over Mission Bay.

Boaters can get a view of the show from either South Cove or Perez Cove, directly in front of SeaWorld San Diego.