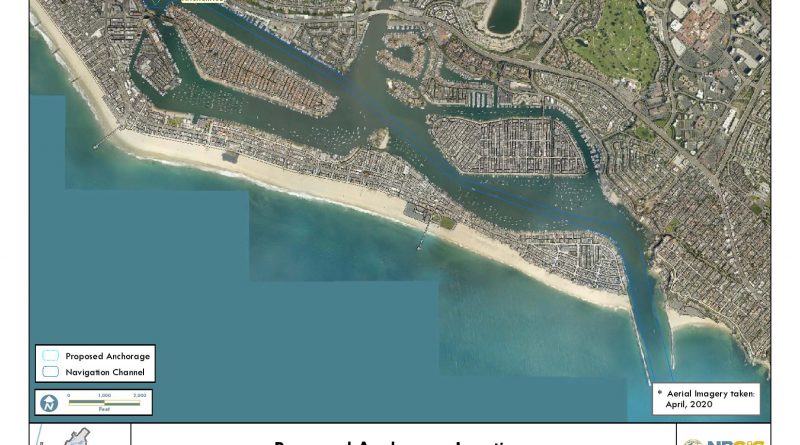 The city is soliciting feedback from the public on the proposed West Anchorage through a brief online survey, which is open through Dec. 31.

NEWPORT BEACH— Boaters have until the end of the month to participate in a survey about a proposal to add an additional public anchorage location in Newport Beach Harbor.

Currently, Newport Beach Harbor has one designated public anchorage area located east of Lido Isle. This location allows boaters to anchor safely to relax and enjoy stationary time aboard their vessels outside of the harbor’s active navigational channels. Both day and short-term overnight use of the existing anchorage is allowed, with overnight use of the anchorage limited to a maximum of three days in a 30-day period. Users of the anchorage must adhere to various safety rules, including the vessel’s skipper remaining aboard the vessel while in the anchorage, at almost all times.

According to city staff, during the summer months, when recreational boating is typically most active, it is not unusual to find the anchorage congested and at full capacity with no room for additional recreational boaters to find safe anchorage.

In an effort to provide the harbor’s boating community an alternative anchorage location and reduce the potential of crowding and over-capacity use of the only existing designated anchorage, the city established a trial anchorage west of Lido Isle near the Turning Basin, dubbed the West Anchorage. The trial anchorage was in place during 2015, 2016 and 2017 and according to the city, the trial was well received.

According to previous Log reporting, plans to make the city’s second public anchorage permanent began in 2018 with a recommendation by the Newport Beach Harbor Commission. City staff then submitted a formal proposal to the U.S. Coast Guard for a permanent and year-round anchorage at the location. Log reporting stated the Coast Guard withheld initial support of the city’s plans, with two sources with the city saying high traffic volume in the Turning Basin area was cited as the reason for the lack of Coast Guard support.

A page on the city’s website has been set up for the West Anchorage. According to the webpage, the city is pursuing a request for consideration from the U.S. Coast Guard for a long-term anchorage designation in the Turning Basin. The Harbor Department is soliciting feedback from the public on the proposed West Anchorage, through a brief online survey, which can be found at bit.ly/39s6pzj. The survey will remain open through Dec. 31.