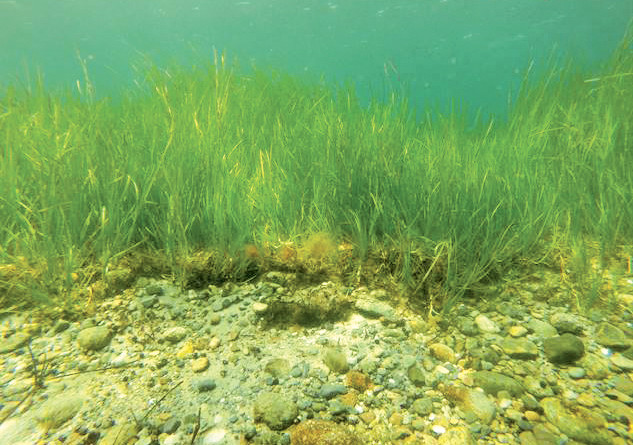 Newport Beach continues its discussion on managing eelgrass in its harbor

A workshop was held to inform Newport Beach residents how a unique plan was created to help manage eelgrass and allow for more cost effective dredging.

NEWPORT BEACH — “Living with eelgrass in a recreational harbor” was the topic of discussion at a Newport Beach workshop held in November. The purpose of the workshop was to explain the importance of eelgrass to boaters and residents as well as answer questions about the unique plan the city put in place for dredging projects.

Marine Restoration Director Sara Briley of Orange County Coastkeeper, Harbor Resource Manager of Newport Beach Chris Miller and dredging contractor Adam Gale of Anchor QEA were the three presenters at the workshop. There were 35 local residents in attendance. Most attendees had very specific questions about their docks and their particular situation.

“By the number of questions asked, it became apparent that not as many people know about the eelgrass plan as previously thought,” Briley told The Log. “This showed that there was definitely a need to have such a workshop.”

Eelgrass earned a bad reputation over the years specifically for getting caught in boat engines and being an obstacle to dredging projects.

Eelgrass, however, has high ecological value. An abundance of eelgrass means better water quality, increased fish populations and a better ecosystem overall, according to coastal habitat analysts and scientists.

The ecological value of eelgrass served as the driving force behind Newport Beach’s push for boaters and residents to preserve and protect the marine plant. Briley said boaters could do their part by not navigating in certain areas of the bay or ocean.

“Stay out of shallow areas where eelgrass is likely to grow,” Briley stated.

If it is necessary to take a boat into a shallow area, Briley recommends checking a useful navigational map on Newport Beach’s website (bit.ly/2hz7lnY). Click on the most recent eelgrass survey under harbor layers and the locations for the big beds of eelgrass are highlighted in yellow. Once boaters know where the big patches of eelgrass are, they can avoid those areas.

“Also local residents can help by ensuring fertilizer does not runoff and dog waste does not end up in the water,” Briley continued.

Eelgrass does not do well when there are a lot of nutrients in the water. An abundance of nutrients cause algae to grow, blocks out light and as algae decomposes it removes oxygen from the water. These are all detrimental to eelgrass, Briley explained.

Newport Beach and Orange County Coastkeeper understand the importance of dredging in the harbor to keep water levels deep enough to navigate boats safely and to prevent waterfront homes from getting flooded.

This is why Newport Beach spent the past decade working with numerous federal and state agencies developing a unique eelgrass mitigation plan for the harbor. What was once a timely and costly process for homeowners to dredge is now easier and less expensive, city officials have touted.

The city of Newport Beach was able to establish Regional General Permit (RGP) 54 in 2015 which allows for more material to be removed from dredging every year and in greater depths.

RGP-54 has cut a lot of red tape since it went into effect in January 2016. The permit allows Newport Beach to manage its own dredging projects.

“Prior to RGP-54, residents would have to pay a consultant to plant eelgrass at a particular ratio relative to how much was taken out from a dredging project. Then they had to monitor the eelgrass for 5 years after that and meet very specific success criteria,” Briley said. “If they didn’t meet the success criteria, then they had to pay the consultant to do even more work. That is where the negative perception [about eelgrass] comes from.”

Eelgrass mitigation efforts and cost have gone down considerably with RGP-54 and Newport Harbor Eelgrass Protection and Mitigation Plan in play.

As reported at the workshop, the city received more than 67 applications in the past year. More than half have received approval to dredge, and several have already completed their dredging projects.

RGP-54 and Newport Harbor Eelgrass Protection and Mitigation Plan work together and allow eelgrass to be temporary impacted for dredging projects.

“Eelgrass acreage is up right now and doing really well, because of the drought,” Briley said. “There is over eight acres in upper Newport Bay, and we haven’t seen that since the 1960s.”

This is good news as the more eelgrass there is, the more dredging projects will be allowed.

Information about dredging permits and the application process is available on Newport Beach’s website at bit.ly/2hQFClD.