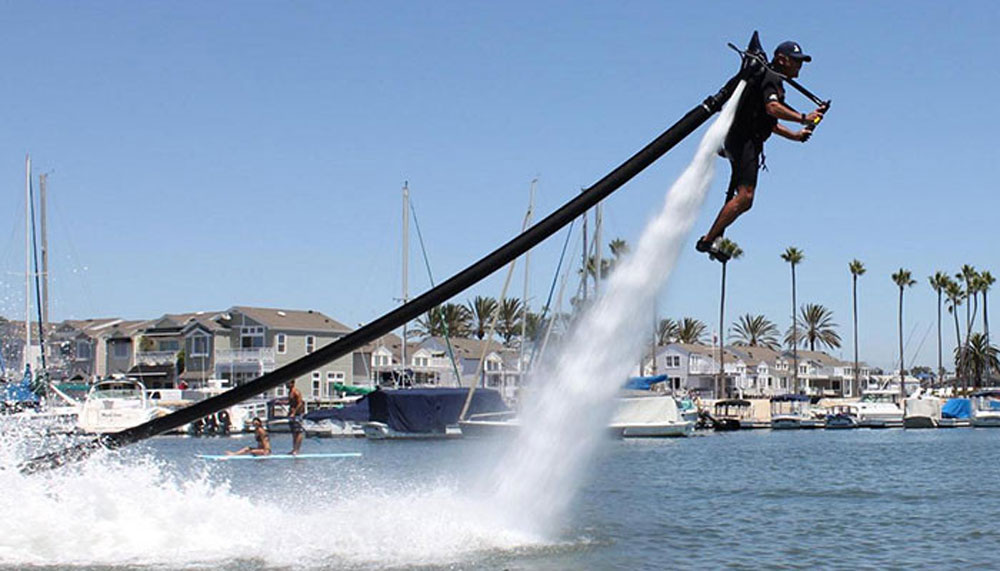 NEWPORT BEACH — The prevailing winds in Newport Beach have changed directions a few times this year, as noted by the barometer that is the local City Council. Two weeks after council members withdrew its support of water propelled vessels operating in the harbor, the dais switched positions yet again at its May 12 meeting, voting to allow Jetpack America to remain, with restrictions, in the harbor for another year.

A proposed ordinance seeking to ban all jetpack use in Newport Harbor did not come to a vote. Instead, in a 4-2 vote, council members supported an alternate plan to allow one commercial jetpack operator (Jetpack America) in the harbor with a one-year permit. When the permit expires in 2016, the council will review the issue again and decide whether to renew the permit or ban the activity going forward.

Assuming the vote clears its second reading after Memorial Day weekend, Jetpack America will be the only operator allowed to offer the water propelled activity in Newport Harbor. The city does not allow individual users to operate a jetpack within the harbor.

The allowance of jetpacks in Newport Harbor has been a rocky affair. Newport Beach’s Harbor Commission recommended jetpacks not be allowed in the bay. Earlier this year, council members unanimously agreed to look into ways to allow jetpacks to exist within the harbor but with restrictions. The unanimous vote evaporated last month when a split council sought to ban jetpacks in Newport Harbor. Earlier this month, the pendulum swung the other way, giving Jetpack America a reprieve.

A majority of the 25 speakers who addressed the dais at the May 12 City Council meeting were in favor of jetpack use in Newport Harbor. Most of them refuted claims the jetpacks were too loud or unsafe, with some stating Jetpack America was never cited for violated noise ordinances or recklessness around boaters, kayakers and other harbor users.

In all, 13 of the 25 speakers supported Jetpack America’s operation in Newport Harbor. Seven speakers opposed jetpack use in the harbor while one resident asked the council to consider placing the issue on the ballot and let voters decide the fate of water propelled vessels within city limits. Four representatives from Jetpack America also addressed the council.

Lido Peninsula resident Chris Del Rey was one of the 13 speakers in favor of Jetpack America.

“I don’t hear it. If you really listen for it, yeah, but I also hear the boat at eight  in the morning with the little outboard … [or] the big yacht that goes by when you’re taking a nap at two, I hear that, but I’m not hearing the jetpack,” Del Rey said. “There’s noise in the harbor.”

“We have to share the harbor with other vehicles. That’s part of living in a community,” Glenn said, adding Jetpack America was never cited for violating noise ordinances and demonstrated it could safely operate in the harbor.

Another resident, Dave Clark, urged the council to come to some sort of workable solution with Jetpack America.

“I caution the council members about unilaterally banning a business on opinion only, rather than working with a company who has been proven to have [a strong] safety [record] and no noise problems,” Clark said.

Opposing residents commended Jetpack America for staging a positive and compelling campaign in favor of its business but still maintained the council should ban jetpacks because they still believed the water propelled vessels were loud and posed a serious safety risk.

Newport Beach native Barbara Beck suggested jetpacks be banned for noise the same way the council prohibited leaf blowers for being too loud. She also pondered whether Council member Marshall Duffield could invent a Duffy jetpack with an electric motor.

There were two residents who said Jetpack America was better off operating at an inland water venue such as Lake Havasu, where there were fewer residents on the waterfront.

Several residents who opposed the jetpacks believed it was only a matter of time before a major collision or injury occurred in the harbor because of a water propelled vessel.

On the dais, Council member Keith Curry, who was absent when a majority of his colleagues directed city staff to draft an ordinance banning jetpacks from Newport Harbor, said he was opposed to any outright prohibition of water propelled vessels. Curry suggested the council find some compromise to allow a jetpack business on the harbor, albeit with limitations and restrictions.

Mayor pro tem Diane Dixon cited a letter she received from residents near Bay Avenue and 19th Street, all of whom were opposed to jetpacks. Dixon, who was not in favor of Jetpack America remaining in Newport Harbor, suggested the company relocate to just beyond the jetty.

Also opposing jetpack use was Council member Scott Peotter, who believed water propelled vessels were not compatible with other uses in Newport Harbor.

Council member Tony Petros proved to be the swing vote in what appeared to be a deadlocked issue coming into the May 12 council meeting. Petros was one of the three council members who supported the drafting of an ordinance banning jetpacks two weeks earlier.

Dixon and Peotter lodged the two nay votes. Council member Marshall Duffield recused himself, stating he was conflicted from participating because of his boat rental business.

Prior to the May 12 council meeting, The Log observed Jetpack America’s operation during a one-hour stretch between 11 a.m. and  noon in front of Marina Park. At relatively close range (about 50 yards away), the sound of a nearby jet ski trailing a jetpack operator was louder than the jetpack itself. The noise appeared to be quite faint and no louder than any other harbor activity when standing in front of a few houses about 200 to 300 yards away from an operating jetpack. In fact, the noise of planes from John Wayne Airport flying overhead, nearby construction users and steady automobile traffic were significantly louder than the operating jetpacks.

“We’ve had no major incidents over the past four years,” O’Malley said. “We know we’re the new guys in the harbor, but that doesn’t mean we don’t have the ability to share the space with everyone out there on the water.”

He addressed the noise complaints, adding jetpacks are no louder than any other water activity.

“The noise is similar to any other water activity, whether it’s a jet ski or a boat. The farther away you get [from an operating jetpack], the more the noise dissipates.”

Renee Smith, who has lived on Bay Avenue for 10 years, said banning jetpacks could open the door to other water uses being banned simply because they were noisy.