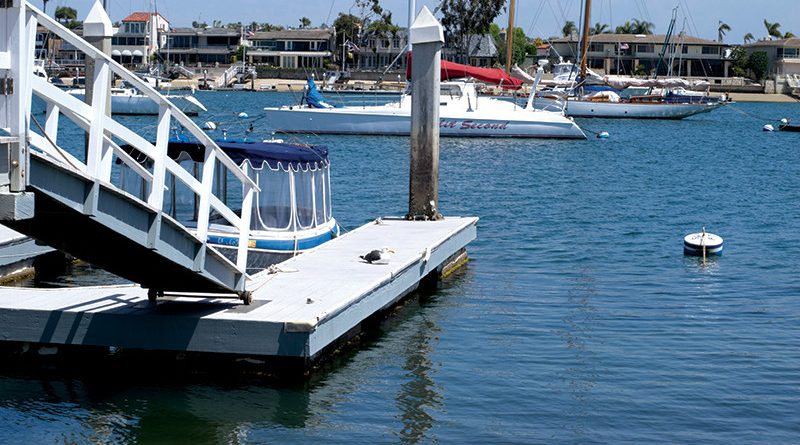 The Harbor Commission’s proposed changes to Council Policy H-1, which lays out the process for exceptions to when piers and floats may extend beyond the pierhead line, give the Commission more discretion to approve structures that were not built exactly in accordance with the permit but have been encroaching for some time. Lindsey Glasgow photo

Council Policy H-1 is intended to layout the process for exceptions to a city municipal code rule which states piers and floats may not extend beyond the pierhead line.

NEWPORT BEACH一 The Newport Beach Harbor Commission has unanimously agreed on proposed revisions to Council Policy H-1, which provides criteria for staff and the Harbor Commission when making decisions regarding piers and floats within Newport Harbor, specifically the distance they extend bayward throughout the harbor.

The changes, approved at the Commission’s July 14 meeting, give the Commission more flexibility and discretion to approve structures that were not built exactly in accordance with the permit but have been encroaching for some time; add discretionary criteria of preserving harbor views and being aesthetically compatible with the surroundings; change the title of the policy to more accurately reflect its purpose; and add a clarification that approval under H-1 may not be enough to move forward with the project, there may be other applicable requirements under Title 17, such as having to get a harbor development permit, which would require the Commission make the specific findings for such permit.

The proposed new title of the policy is “Pier and Float Extensions Beyond the Pierhead Line.”

The revisions also create a Part A and B, with A being the main section and B addressing the unusual or outlier parts of the Harbor, such as the “like-for-like” reconstruction language.

“For those piers and floats in areas where the pierhead line does not exist or where the bayward extension of those structures is not clearly limited by the pierhead line, staff may approve pier and float reconstruction projects if the existing pier or float is in substantial conformance with the city-issued permit and the reconstruction is of exactly the same square footage or less, and substantially similar configuration, including updates required to conform to current code and building standards,” Part B states. “Projects that do not meet the criteria for staff approval shall be reviewed in accordance with the other provisions of Title 17.”

The proposed revisions will now go to the City Council for final approval.

The purpose of the policy is to provide guidance on Newport Beach Municipal Code Section 17.35.030(A) which states: “Piers and floats may not extend beyond the pierhead line unless approved in compliance with Council policy as may be amended from time to time.” The Council Policy was established in 1964 and has been revised 62 times since then.

The City Council had asked the Commission to review the policy after several recent applications heard by the Harbor Commission led to confusion about making a determination of what should be allowed, particularly when considering what should be allowed under a “like-for-like” reconstruction permit application when the dock currently already extends past the pierhead line.