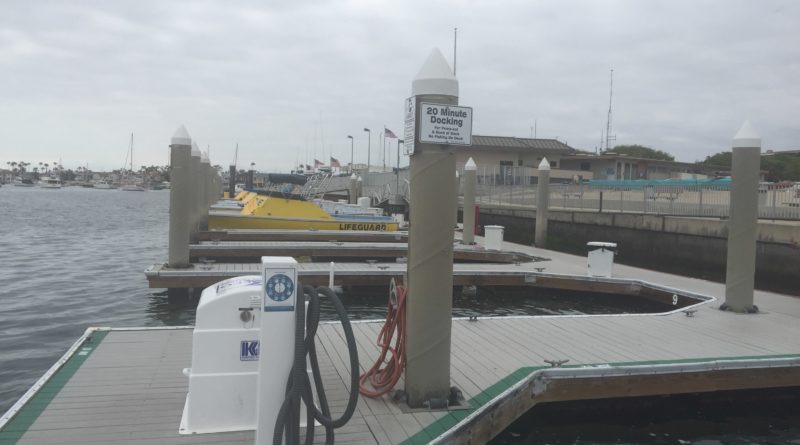 Changing public dock access visitation from 72 hours to 20 minutes was deemed to be noncompliant. Is the Sheriff’s Department’s actions here innocent or indicative of a systemic issue?

NEWPORT BEACH—Several news outlets picked up the story about Orange County Sheriff’s Department Harbor Patrol (OCSD) and Lt. Christopher Corn’s decision to limit dock access from 72 hours to 20 minutes. Corn has defended his decision, stating one of the main reasons for the change was to deter boaters from storing their vessels for a prolonged period along the visitor’s dock.

The Log reached out to a few people to gain some more perspective on the issue. Some questions remain unanswered, but The Log will continue looking into this matter as it continues to develop and play out.

Commissioner Paul Blank, who sits on Newport Beach Harbor Commission, told The Log in an email he could see both sides of the matter.

“I have read the letter from the Coastal Commission,” Blank stated. “It basically puts the OCSD on notice that they violated terms of Coastal Commission issued Coastal Development Permits (from ’95 and ’08) by changing the use of the facility in several ways and posting some signs. The letter suggests that the county contact the Coastal Commission staff to build a pathway to compliance, which may involve new or amended permits and/or undoing some of the changes that were made.

“I understand the county has contacted the Coastal Commission and they are working cooperatively. I also understand the County has restored access to the dinghy dock from dawn until dusk, thus allowing visitors to the facility or the adjacent beach to enjoy a spot essentially all day,” Blank continued.

Blank referred to a previous study the harbor commission conducted in 2013 and 2014 where he also attached a slide that showed the public areas that most needed a public pier.

“I think [the slide] says the most about what we studied, learned and ultimately recommended regarding the need and placement for public piers. This report was exclusive to the existing and proposed city public piers. We didn’t consider the county public docks as they are outside our jurisdiction. Still, I think the image is telling. How big is the need for a public dock in Corona del Mar?” Blank said.

“Otherwise, I don’t have a really strong opinion on this matter,” Blank continued. “The county made some changes to their facility to optimize their use and efforts. A constituent is disappointed he can no longer leave his dinghy tied up there for extended periods of time (72 hours). I see both sides.”

According to Carol Jacobs, Newport Beach assistant city manager, the city has only received one complaint on the subject.

The Log reached out to OCSD Public Information Officer Carrie Braun on June 6 to determine whether Corn had been authorized at the county level to make the change.

“I believe you received a response from Lt. [Chris] Corn stating that we are working with the California Coastal Commission to resolve the issue.  That’s the extent of the information we’ll be providing at this time,” Braun said.

Jacobs confirmed although Corn had been scheduled to give a presentation to Newport Beach Harbor Commission, the county had advised against rescheduling. The Log again reached out to Braun on June 18 to ask about the county’s position, but there was no response by press time. If any further information becomes available, The Log will update this story online.

“The Sheriff’s department has agreed to some interim measures to open up public access at the site, and already implemented some of those (e.g. removal of some no trespassing signs and signing of the public beach drop-off point) but a comprehensive resolution that improves public access will take some time on the part of both parties to work out. The sheriff’s department has been cooperative in that regard to this point,” Schwartz said.

Overall, does this matter really pose any kind of significant threat to public areas being available to boaters?

Several sources cited in this article were quick to point out that the city does not have jurisdiction over OCSD’s use of the docks as they are operated at a county level. Newport Beach, over the past few years, has been positioning the city to have more control over the waters and outspoken representation, such as Newport Beach City Council member Marshall “Duffy” Duffield, have made it know that a major interest is protecting the harbor/Newport’s waterways from regulations at a state and national level.

However, at a Speak Up Newport meeting, Duffield denied the city is aiming to take away harbor patrol duties from OCSD.

Newport Beach also has a history of seeking to bypass Coastal Commission authority. In May 2018, The Log editor Parimal M. Rohit reported on the results of Newport Beach’s desire to be reclassified as a “port,” attempting to join the ranks of Los Angeles, San Diego, Long Beach and Port Hueneme. The Coastal Commission denied the request and also seemed iffy about creating a Port Master Plan, which through AB 1196 allows some harbors, such as Humboldt Bay Harbor, to be treated as a port.

Sarah Christie, a legislative analyst for the Coastal Commission, was quoted in the article as saying, “The problem is, quite simply and sort of obviously, the city is not a port.”

She also said she was “concerned about the precedent this would set” to allow Newport Beach a Port Master Plan and “We don’t have a lot of clarity on … what they’re trying to achieve with this bill.”

Essentially, having a Port Master Plan would diminish the state oversight on activities in Newport Beach waters. How would that affect the governance if Newport Beach were to achieve this goal?

On a similar subject, Dana Point Harbor Advisory Board asked for a budget review of OCSD’s Dana Point headquarters in April 2018.

“This is not a judgment on Sheriff’s Department personnel or the performance of their mission,” James Lenthall, president of Dana Point Boaters Association, said in an email to The Log. “Rather, this is an examination of the ongoing impact on our harbor economy from this enormous and escalating expense.”

It was reported OCSD was the largest expense from the Dana Point Tidelands fund in 2018 at $4.5 million. At the time, it was estimated that their expenses were projected to rise to $8 million in the coming years.

In this power struggle, how much control is too much? Should OCSD be able to make changes to coastal access depending on the severity of the situation? Would it be acceptable for Newport Beach staff to cut out county, state and even federal regulations? Is it effective for a small group of people to preside over how taxpayer dollars – equally from city, county, state and even federal levels – to spend those amounts?

Another perspective to consider: The Sheriff’s Department has been on the record stating the limitation of dock access was not an illegal act. The legality of whether dock times could be changed really isn’t the question. Whether the Sheriff’s Department was authorized to make a change is really the question to be asked. Corn has been on record stating he was authorized to cut dock visitation times from 72 hours to 20 minutes – but neither he nor anyone else has cited the statute or code providing the department with the authority to make such a change. The Log is reaching out to legal experts for guidance here.

The Log will continue to report on this matter, including any moves that Newport Beach staff and public officials are making in relation to these issues.

One thought on “Newport Beach Public Docks: Trying to Sort Out What’s Happening”