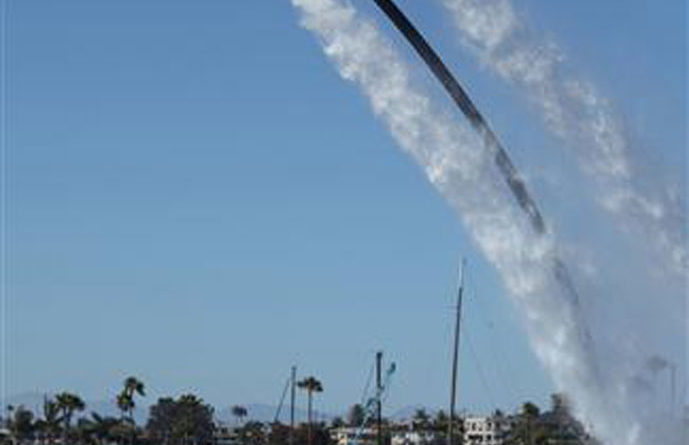 Council members unanimously voted at a Feb. 24 study session to pursue a policy allowing one jetpack operator in Newport Harbor. Fast forward to April 28, the 6-0 vote in favor became a 3-2 vote against.

The split vote did not result in an all-out ban on jetpacks. Instead, the council only prevented staff from selecting a vendor to operate water-propelled vessels in Newport Harbor. Since the vote meant the city’s Harbor Department could still issue permits to jetpack operators despite the council’s decision, Mayor Pro Tem Diane Dixon proposed city staff draft an ordinance prohibiting all jetpack use from Newport Harbor.

Dixon joined Councilmen Scott Peotter and Tony Petros in rejecting the one jetpack operator policy, a position directly opposite of their respective stances just a few weeks ago.

Curry did not attend the April 28 meeting. Similar to the Feb. 24 study session, Councilman Marshall Duffield recused himself from the discussion and vote. Eric Longabardi, a spokesman for Jetpack America, told The Log he believed Curry would continue to oppose any absolute bans of jetpacks in Newport Harbor.

Whether Curry or Duffield’s participation would have altered the outcome of the vote is speculative.

The council’s April 28 vote possibly resulting in the eviction of Jetpack America from Newport Harbor is less speculative. Jetpack America has been operating in Newport Harbor with a Marine Activity Permit; however, the permit expires May 21. If the council approves Dixon’s proposed ordinance or if she and her colleague’s reach a stalemate this month, Longabardi said Jetpack America would be forced to shut its doors on May 22.

Dean O’Malley, president of Jetpack America, made several attempts at Harbor Commission and City Council meetings to address noise complaints and safety concerns. He repeatedly told city leaders his company was well-staffed and properly trained to prevent accidents from occurring.

O’Malley added his company conducted its own sound studies. Based upon those studies, O’Malley believed the noise levels were reasonable. He also hoped the council could develop a viable noise abatement agreement similar to the compromise the city reached with John Wayne Airport.

“We do feel we can fit in,” O’Malley told council members before their vote. “We tried to be respectful to our neighbors.”

In the end, however, two council members were apprehensive of supporting Jetpack America, or any other water-propelled vessel operation, because of noise concerns. The focus on the decibel levels of jetpacks also represented a shift among policymakers; harbor commissioners and council members initially questioned whether jetpack users posed a safety threat to other harbor users and to themselves.

Peotter said he took a closer look at jetpacks since the council’s Feb. 24 study session and determined water-propelled vessels were not consistent with other uses in Newport Harbor. He did not elaborate on what uses he closely analyzed.

When the council studied jetpacks during a Feb. 24 council study session, Dixon said she was inclined to go along with allowing one jetpack operator in Newport Harbor. She said she changed her mind in the weeks leading up to the April 28 council meeting.

“This is primarily affecting residents of my district. I’m greatly influenced by the unanimous vote of the Harbor Commission, who voted against this recommendation. Most of the water areas in our harbor front residential property,” Dixon said. “I think it will have negative impacts on our residents.”

The mayor pro tem said she was also influenced by a recent visit to Newport Harbor and witnessed jetpack operation there. She said she believed the jetpacks were too loud and would not want to live wherever they were allowed to operate.

“I want to support the very strong wishes of the residents in District 1 who would be negatively impacted by this,” Dixon said, hoping city staff would return to council with a proposed ordinance to prevent a permit to be renewed for Jetpack America or issued to any other operators of water-propelled vessels.

Last year, Newport Beach’s Harbor Commission recommended jetpack operators should be required to operate in the ocean and outside the confines of Newport Harbor. O’Malley responded operating in the ocean posed greater safety risks and would significantly increase his cost of doing business in Newport Beach.  Jetpack America has been operating in Newport Harbor for nearly four years; it also has operations in San Diego and Las Vegas.

If it is not permitted to continue operating in Newport Harbor, Jetpack America will close its doors in Orange County and focus on its other two operations.