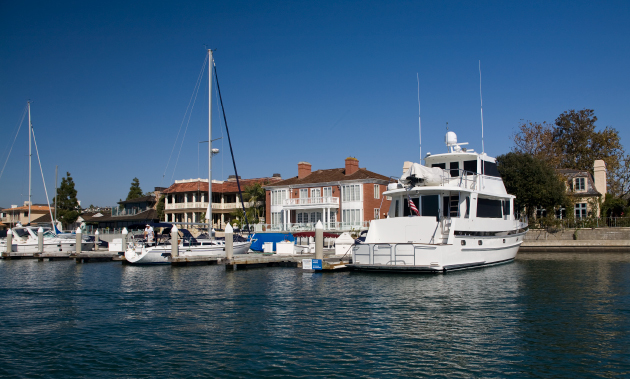 California Coastal Commission approves the replacement project, which would not alter marina layout or slip count.

“Existing power center covers will be replaced with fiberglass covers,” Coastal Commission staff stated in a report to commissioners. “The project will not include removal, replacement or addition of waterside piles supporting the dock system or changes to the slip count or layout.”

Public access at the marina won’t be affected by the re-decking project, even though the venue is not readily or directly accessible by pedestrians.

“There is no direct public pedestrian access to public tidelands through the subject site,” Coastal Commission staff stated. “However, public access to the harbor exists in the area across the channel along the public walkways on Lido Island and Balboa Island. Therefore, the proposed project does not result in adverse impacts to public access.”

Eelgrass does exist at the project site. Coastal Commission staff, however, stated the project would not have an adverse impact on eelgrass.

Bayshore Marina is a private marina located at 2750 Bayshore Drive in Newport Beach. The marina is located in the harbor’s main channel and is home to 134 slips and is open to boats between 20 and 83 feet in size. Services available to boaters include oil disposal, sewage/bilge pompous, transit berths or tie-ups, showers, restrooms, gear lockers and on dock amenities (cable television, electricity and phone).

The applicants for the re-decking project were Irvine Co. and California Recreation Co.

The proposed development sits on public tidelands and submerged lands of Newport Bay, making the project subject to Orange County permitting. Irvine Co. and California Recreation Co. have obtained the county’s approval for the re-decking project, according to Coastal Commission staff.

The applicants have also applied for a U.S. Army Corps of Engineers permit and are awaiting coastal development permit approval.

Members of the general public will not lose any access to the coast or nearby recreational facilities because of the Bayshore Marina re-decking project, Coastal Commission staff confirmed.