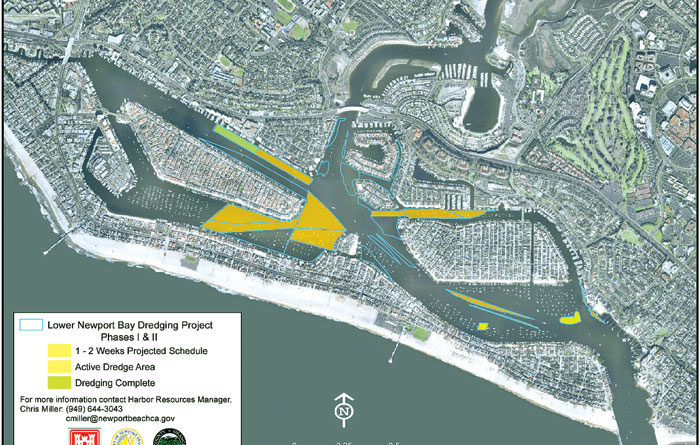 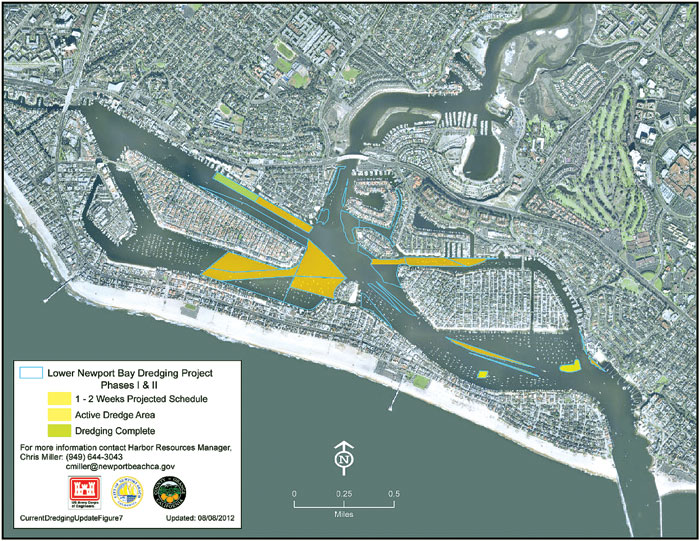 NEWPORT BEACH — As the dredging continues in Newport Harbor toward the second phase of the $10.5 million Lower Bay project, another milestone has been reached, as the large swath of polluted material has been removed from the harbor floor.

The more than 90,000 cubic yards of sediment marked unsuitable for ocean disposal has been transported by barge out of the harbor and sent to the Port of Long Beach’s approved Contained Aquatic Disposal (CAD) site, where they port has plans to create a new, modern shipping terminal on the newly created landfill.

While the Lower Bay project will remove more than 500,000 cubic yards of sediment, from the harbor, creating a more navigable waterway for deep-draft vessels, the removal of the contaminated sediment from this project — along with the 85,000 cubic yards of polluted sediment removed from the $4.5 million Rhine Channel cleanup last year — rids the harbor of nearly 90 percent of its unsuitable material.

With Phase 1 of the Lower Bay dredging wrapping up, R.E. Staite engineering — which was contracted by the Army Corps of Engineers and the city for the project — is planning to implement the additional $4.5 million in dredging scheduled for Phase 2.

And while Phase 2 includes a small patch of 2,850 cubic yards of contaminated sediment, the remaining 207,000 cubic yards marked for removal around the harbor is safe for ocean disposal.

Newport Beach Harbor Resources manager Chris Miller hopes that the second phase will be a quicker and smoother-run project than Phase 1, as the dredgers will not have to barge the sediment up to Long Beach and wait for high tide to dump the sediment at the fill site. Due to time constraints and a concern about the landfill site filling up with other dredging projects’ sediment, Miller allowed a 24-hour dredging schedule so that R.E. Staite could take advantage of optimal tide conditions.

Phase 2 is expected to begin by early September.

“The Port of Long Beach asked us to dispose (of the dredged material) in the most shallow parts of the fill site — meaning we must dispose at only the highest tides, so we can float farther back. As you can imagine, this was quite a scheduling challenge, but R.E. Staite figured out a way,” Miller said.

With the contaminated material dredging nearly complete, Miller said the dredging schedule should return to operating within daylight hours, and the ocean-suitable material will continue to be barged offshore to the approved LA-3 disposal site.             Dredging is expected to continue through summer and fall, and Miller is hopeful phase two will be wrapping up prior to the Newport Beach Christmas Boat Parade.

Updates on Lower Bay Dredging
• With the approval of Phase 2 dredging, the map showing the dredge footprint for the project has grown considerably.                • The area between Lido Isle and Balboa Peninsula marked for dredging is nearly complete. Final survey results are needed to validate completion, so the dredger may have to return to do some cleanup, depending on those results.

• R.E. Staite moved operations to the Coast Guard/Harbor Patrol and Balboa Yacht Club area. It began dredging Aug. 7, but made very little progress due to the material composition at this end of the harbor. It decided to swap out their current 14-cubic-yard bucket dredge (weighing about 17,000 pounds) for a much heavier but smaller 5-cubic-yard bucket (weighing 32,000 pounds) to work in this area.

• A few moorings in the “A” Mooring Field will have to be relocated, as may some in the Balboa YC mooring field. Once the moorings to be moved are identified, the city will coordinate with boat owners to relocate their vessels, which should only be for one to two days.

• RES has completed dredging in the channel along North Bay Front near the Balboa Yacht Basin and Promontory Bay. A survey of the area is being conducted to make sure the work is complete.

• After completing the North Bay Front area, R.E. Staite moved to the area between Lido Isle and the Balboa Peninsula, finishing up dredging of the Port of Long Beach-bound material. It took only three days to remove a few high spots in the center of the channel, as well as along the edges of the homes.

• With the Port of Long Beach material nearly complete, Miller said he will be focusing the dredging on the “D” Mooring Field, so the moorings can be moved back into place. Once complete, the focus will be on the Newport Harbor YC mooring field and the “F” Mooring Field.

• Currently, only the larger Palomar dredge is in Newport Beach. The smaller dredge is still in San Diego undergoing maintenance repairs.

• The information in these updates can be viewed online at newportbeachca.gov/lowerbaydredging.