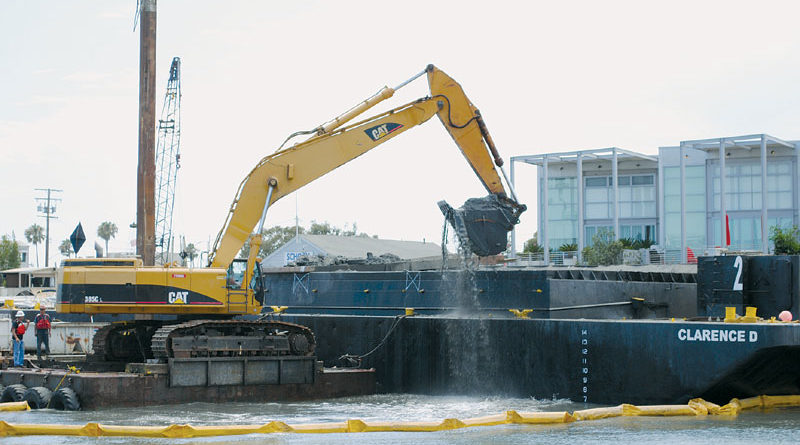 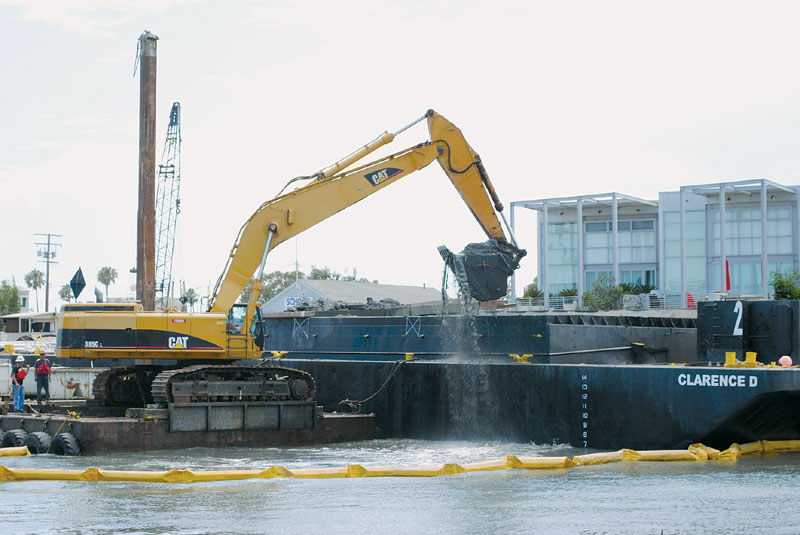 NEWPORT BEACH — Any day now, dredging crews and large barges will begin traversing Newport Harbor, carrying away years’ worth of built-up sediment and contaminants that have hindered navigation and Newport Bay water quality for decades.

City officials have been working with the federal government for years to get to this point — and with the Army Corps of Engineers finally awarding a dredging contract to San Diego-based R.E. Staite Engineering, a $7.8 million project is about to get under way, removing around 500,000 cubic yards of sediment from Newport Harbor.

Maintaining navigation ability in the harbor’s main channels, or federal navigation channels, is ultimately the responsibility of the federal government — and for years, Newport Beach city officials and harbor users have unsuccessfully lobbied to get the government to dredge the harbor back to its original design depth.

After years of wrestling with funding issues and contaminated sediment problems, the opportunity to relocate nearly 130,000 cubic yards of Newport Harbor’s contaminated sediment at the Port of Long Beach’s Middle Harbor Project site instead of trucking the material to an inland landfill has city and federal agencies working together on Lower Newport Bay’s first large-scale dredging project since the harbor’s creation in the 1930s.

At press time, Newport Beach Harbor Resources manager Chris Miller said he expected dredging to begin in early April — a date that had been pushed back due to a delay in the Corps of Engineers acceptance of the city’s funds to cover the base costs of the planned project.

The project was originally expected to start immediately following the completion of the $4 million Rhine Channel dredging project that was wrapped up in Nov. 2011, and the Port of Long Beach’s timeline called for the port to receive 130,000 cubic yards of contaminated sediment removed from the harbor for Contained Aquatic Disposal by March 14.

The Port of Long Beach is in need of nearly 3.4 million cubic yards of sediment to fill in approximately 54 acres of water area, on which it plans to construct a new shipping terminal.

As Miller realized the deadline would not be met, because of the Corps of Engineers’ delay, he worked with Port of Long Beach officials to extend the timeline to June 30.

“We have some time, but we’ll still have to hustle,” Miller wrote March 20 in his first weekly Lower Newport Bay dredging update.

If the Port of Long Beach had not agreed to a deadline extension, Newport Harbor’s contaminated sediment would have had to be trucked to an inland landfill site — a much costlier method that would have reduced the dredging project’s scope severely.

Dredging activity will be taking place at a variety of areas around the harbor, as the project targets both contaminated sediment and high spots in the bay that pose a navigational hazard.

The project is divided into five phases:

1. Federal Project Components: Covering the yacht anchorage area off Lido Isle, areas in the main navigational channel, the west end of Balboa Island and the south side of Harbor Island.

2. Environmental Components: Areas where sediment is unsuitable for ocean disposal, including a portion of the Balboa Island Channel, in front of the Coast Guard docks, Lido Isle Reach north (in front of Balboa Bay Club), Newport Channel and West Lido Area.

5. Potential Additional Components (not yet funded): Linda Isle Channel, Upper Bay Channel and other areas to be determined.

Miller noted in his update that some dredging will occur in mooring fields, meaning certain moorings and boats will have to be temporarily relocated.

With the project set to begin at the traditional start of boating season, some issues are expected to arise in which dredging activity could interfere with other planned harbor activities and sailboat races.

“This summer will be a challenge to the boating and racing community, but we’ll do everything we can to minimize the impact to the best of our ability,” Miller stated.