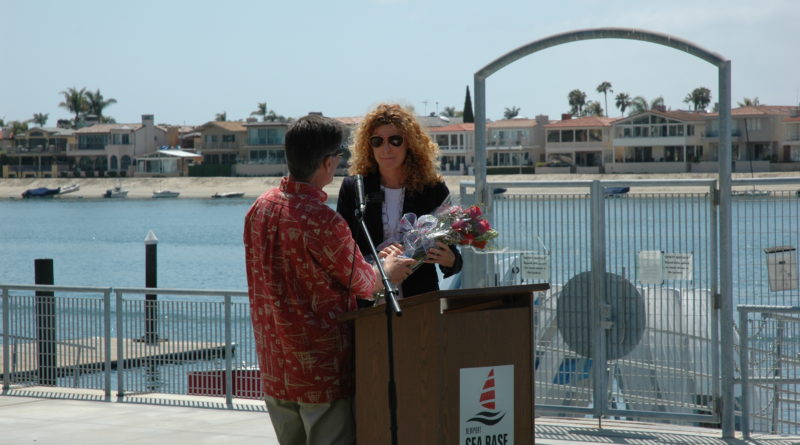 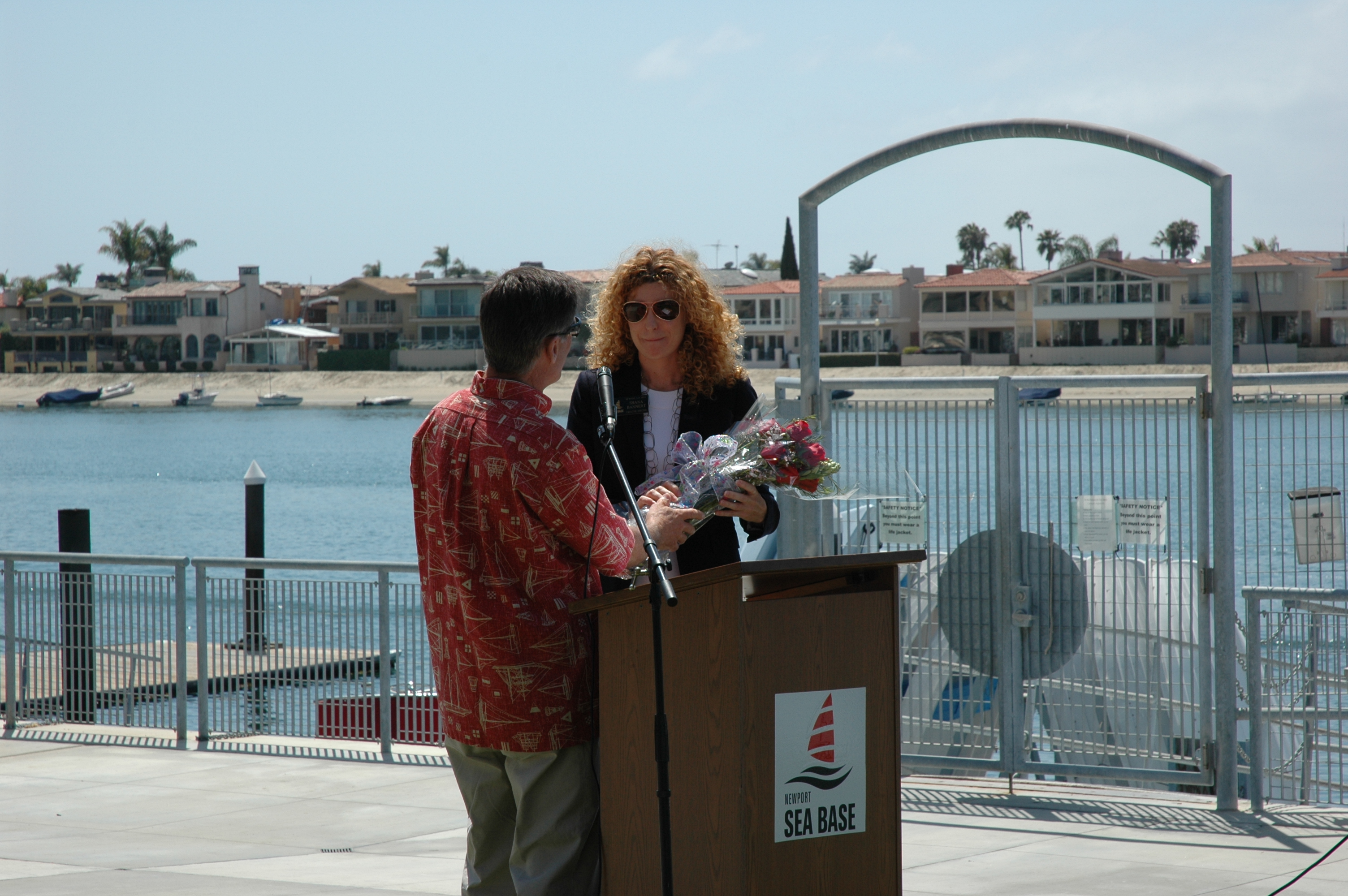 NEWPORT BEACH—As Phil McNamee aggressively tugged on the stunted bell rope positioned near the entrance of the Newport Sea Base on Saturday April 12, the skipper of the Sea Scout ship Triton 1767 resoundingly signaled the facility open for the season.

And while the official ping of spring sailing had plenty that were gathered enthusiastic for the Opening Day’s festivities, the unanticipated announcement of the base executive director’s resignation resonated much stronger.

Shana Bannert, who has held the position for the past three years, informed a lawn crowd, which included county officials, Sea Base associates, Sea Scouts and the public, that she would be leaving her post April 15.

“I feel so fortunate to be a part of this great organization, the Sea Base, big yachting and the boating community in Newport Beach,” she said. “This is my hometown. I will obviously miss scouting.”

A group of well-wishers, including the base’s chairman Gary Allen, saluted Bannert for her dedication to the facility and the scouts. Bannert was presented with a bouquet of flowers and a throng of embraces following the program.

“We understand that you’re leaving us,” Allen said at the podium. “We want to wish you well in your new role. We’re very excited for you. We thank you and recognize you for everything that you’ve done.”

Bannert said she will relocate to San Francisco, where she has accepted a position with Summer Search, an organization which provides experiential learning opportunities for high school and college students. She also said the base has begun a search for her replacement.

“These are the most amazing people that have supported me,” she said. “I’ve never worked for an organization with such dedicated volunteers as the scouts. They are devoted and I just love them. Everyone in the yachting community and Newport loves the Sea Base. The people are amazing.”

With luminous skies and a moderate breeze, the Sea Base, in its 77th year in operation, welcomed about 250 people to the Opening Day revelry, as the Newport Beach Firefighters Association served up hotdogs and hamburgers, donated by Smart & Final.

The free event provided the public with sailboat and pontoon boat harbor tours managed by Sea Scouts 711 Del Mar, 90 Renegades and 1767 Triton. Those remaining on land were greeted with face painting, lifebuoy lawn tosses, Coastie the interactive tugboat and educational booths such as Girls, Inc. and Explore Ocean.

Inside a pair of classrooms, young children frantically blew at the sails of the boats they created for the raingutter regattas, while a staff member directed participants in the fine art of origami sailboats and potential scouts tried their hand at licorice knot tying.
Sharon Klein scanned a stack of pamphlets neatly organized on an adjacent table, some of which included literature on selecting the right life jackets, maintaining clean boating habits and the ABC’s of California Boating.

“We have a boy scout that wants to be a sea scout,” said Klein, who was visiting the Sea Base for the first time. “I love it. It’s a beautiful day and I think it’s great that their sponsoring this. We’re in Irvine. So now we have an opportunity to look at it.”

Orange County resident, Arianna Lee, provided a rendition of the National Anthem, and the Tritons, decked in crisp dress whites, meticulously presented the colors and raised the flags.

“We teach values that help the youth,” said McNamee, who directed the group. “We get the knots out of their rope, so to speak.”
A brief invocation was delivered before Bannert stepped to the lectern to emcee the program. Bannert stressed to the crowd that the Sea Base offers classes year round to both scouts and non-scouts, and all classes are available to the community. She said the base, which was established in 1937 and sits on 400 feet of waterfront property on Pacific Coast Highway, offers marine educational programs—to both boys and girls of greater Orange County— which aid in teamwork, leadership, and nautical safety.

“It is one thing to hear and read a brochure, but it’s another thing to actually come down here and experience it yourself,” Bannert said. “I encourage everyone to find a way to come down and get out on the water.”

“The Harbor Patrol supports Newport Sea Base,” he said. “Every summer they have programs going on here. Shana will get a hold of me and say ‘Can your fire boat come to our facility?’ Each day we have a program for the kids and we do a water display. It’s a wonderful program.”

Sea Scout Ben Brough, another principal speaker, said the base has provided him with a platform to effectively communicate sailing concepts to his fellow scouts.

“Previously, I hadn’t enjoyed the benefits of the ocean and only when I moved here and was enrolled in a four-week sailing course did I understand and have a passion for sailing,” he said. “I’ve been affiliated with the Newport Sea Base and the Orange County Sea Scouts in a variety of ways. However, it wasn’t until I became a counselor in training in 2011 that my excitement for sailing became a lifelong commitment.”

Upon leaving the podium, Bannert reminded the crowd to support the base and never lose sight of the importance of this unique community.

“As always, I’d like to depart with my favorite quote by Mark Twain,” she said “‘Twenty years from now you will be more disappointed by the things you didn’t do than by the ones you did do. So throw off the bowlines. Sail away from the safe harbor. Catch the trade winds in your sails. Explore. Dream. Discover.’”