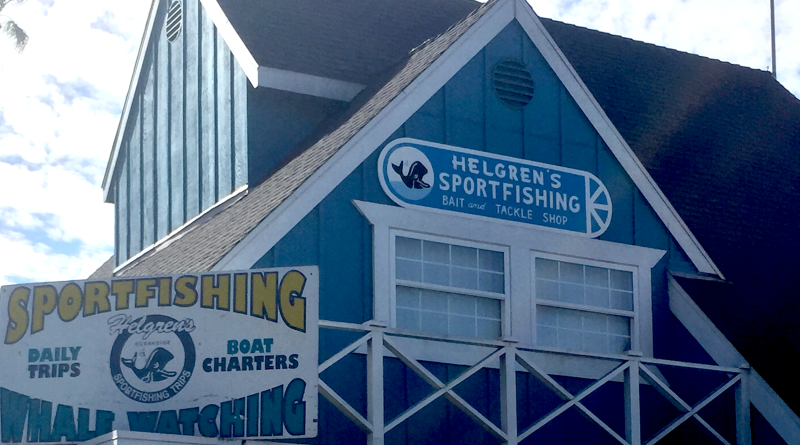 No finality for Oceanside’s Helgren’s Landing despite lease extension

In agreeing to the lease extension, Helgren’s also agreed to vacate the premises.

OCEANSIDE ­― As one sportfishing business tries to hold on to the landing it’s occupied for the past 38 years, another multi-business venture is looking to offer a wide-range of services in Oceanside Harbor. City officials continue negotiations with Helgren’s Sportfishing and the SEA Center in an attempt to make both parties “comfortable” in its marina.

Oceanside’s City Council extended Helgren’s lease, which was set to expire May 5, through Nov. 30 to give all parties involved more time to make concessions.

The extension and new lease agreement also came with a couple stipulations: Helgren’s representatives agreed to have an exclusivity clause removed and to vacate the premises by the end of November.

The city initially approved a Request for Proposals (RFP) in August 2016 to allow Oceanside SEA Center – or Science, Education and Adventure Center – to develop its business upon Helgren’s lease expiring.

Joseph Helgren, soon after the City Council approved the RFP, disputed the decision through his attorney.

Negotiations to determine the final fate of Helgren’s Landing have since been ongoing.

“The SEA Center partners and even our supporters were all fine with the council extending their lease through the end of November,” Cacciola told The Log. “The city decided they needed more time plus we thought it was a gesture of goodwill to give Helgren’s the opportunity to continue to operate during the most profitable time of the year…I think it was a win-win. A win for Helgren’s just because they get another seven months of high season instead of having to move out on the fifth of May.”

The City Council previously attempted to have both parties share the landing space.

“A couple months ago, they wanted to give us 25 percent of our building, have us put $50,000 worth of improvements in and give the other 75 percent to the SEA Center, which would be Pfleger Institute, Chubasco and Joe,” Helgren informed The Log.

Helgren said he was fine with the offer. The terms, however, were not satisfactory to Cacciola and his partners.

“Right from the beginning, we needed enough dock space and we needed enough land space to make this whole project viable. If you try to downsize it, it really isn’t going to work properly,” Cacciola explained.

Oceanside Adventures General Manager Donna Kalez believes the city’s attempt to find a way for all the parties involved to make use of the Helgren’s Landing location might be an impossible task.

“I feel that sharing the landing at this point is going to be very hard [as there] are three different operations that want to share the building. I just don’t see how that will work … and I have to think that Oceanside will want to keep Helgren’s in that same location. If the city wants an aquarium it should go where the Coast Guard dock is where the Sea Star Mr. Joe Cacciola has already been operating,” Kalez stated.

The SEA Center’s plans include sportfishing, research as well as educational programs such as “vessel-based floating classrooms, touch-tank and aquaria-based learning platforms,” as stated in the proposal.

The head of Visit Oceanside, a company promoting tourism to San Diego County’s northernmost city, said plans for the SEA Center, which would include sportfishing and charter activities, floating classrooms, touch tanks, research and public art, would be a great draw.

“We are in an experience economy right now; consumers want destinations that offer new positive experiences and creative opportunities to explore and learn. The harbor has a lot of potential to offer a variety of adventures for everyone,” Leslee Gaul, President and CEO of Visit Oceanside, wrote in an email response to The Log. “I think the Sea Center would be a positive experience to have in the harbor for our local community and guests.”

Both Helgren and Cacciola expect another decision to be made in the next few weeks, and Cacciola is anticipating the SEA Center to be situated at the landing by December.

“The city attorney announced within the [April 19 City Council] meeting…that the city attorney will be coming back to the council with both the SEA Center’s lease and Helgren’s new lease,” Cacciola said. “Theoretically, Dec. 1 [is when the SEA Center could move in to the premises], because Helgren’s lease extension ends Nov. 30, and the city has already stated that is the last renewal/extension.”

That does not mean Helgren’s Sportfishing will be out of business. The business can still operate elsewhere in the harbor.

“We are also up in the air as to our future location and where we will sell tickets from,” Kalez stated.

Cacciola said it was never his intent to put anyone out of business. According to Cacciola, he wants what’s best for the city.

“We’re still in negotiations. They have a mandate to make both sides comfortable,” Helgren stated. “The city attorney said at the city council meeting the other night that they are going to try to have something down within the next couple weeks, so I guess we’ll see.”