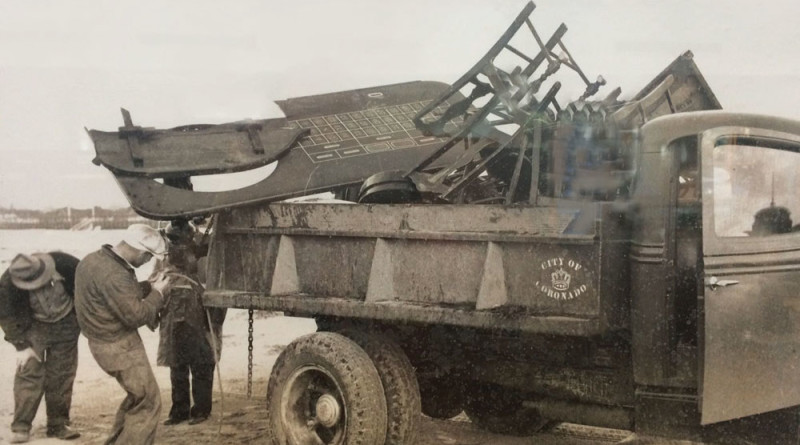 CORONADO — A gambling ship that shipwrecked onto the Coronado coast almost 80 years ago resurfaced, thanks to low tide, from beneath the sand in late January. The large vessel that has an interesting history has been spotted at the edge of shore near the Hotel Del Coronado on several occasions during low tide.

News reports indicate the one-time gambling ship was spotted as recently as 2013 and previously in 2010. City officials also reported a resurfacing of the Monte Carlo shipwreck in the 1990s.

Coronado City Manager Blair King said in a recent newsletter to residents: “Due to the large quantity of sand eroded off Coronado’s beach with the winter storm surf, sections of Monte Carlo shipwreck are more exposed than they have been in almost 20 years.”

Questions abound. Is it currently a hazard to the beach-going public? Does the ship cause any damage to the water and local environment? Was there a time when the ship could have been removed?

King addressed at least one of those questions in his weekly newsletter on Feb. 12.

“Lifeguards assisted a young woman who got too close on a high tide and ended up over her head in a deep hole, struggling to get out,” King said.

He urged beach-goers to use precaution when visiting Monte Carlo.

“Lifeguards are reminding visitors to use extreme caution when exploring the shipwreck at low tide when it is most visible. Lifeguards say beach-goers should wear protective footwear if walking around it and warn against walking directly on the wreckage at low tide due to slippery algae growth and the rusting metal,” King said. “They also advise against swimming around it at high tide as there are deep holes around the shipwreck and when it is covered by the tide, dangerous currents swirl around it particularly when the surf is up.

“Please use common sense and caution and talk to the lifeguards before entering the water in the shipwreck area,” he continued.

Coronado city staff informed The Log a decision was made decades ago to keep Monte Carlo in place.

“The ship has been in its current place for 80 years and it was quite large and the city has opted not to remove it,” a city staff member said. “The question has not come up in decades. That is probably because it only comes up during very low tides and years, such as this, when there are strong storms and heavy surf. There is a sign that is always up warning of an obstruction in the surfline. Also, lifeguards always warn people swimming in the area.”

City staff added Monte Carlo was made of ferro-cement with steel reinforcement. Ferro-cement boats feature a thin layer of cement over reinforced metal.

“The city has been out to the site several times over the years cutting the corroded steel rebar ends that get exposed from the hull of the ship as it slowly decomposes from the wave action,” Coronado staff told The Log. “The ship is uncovered on occasion when storms or wave action are above normal and the tides are low enough to expose the hull. The rest of the time the hull is covered in sand and normal tide.”

Precedents exist to keep the shipwreck in place or to remove it from the shoreline. A Walsh-Kaiser Co. vessel, known as Dominator, ran aground off the Palos Verdes coast in 1961 and has remained there ever since.

Another shipwreck found off the Ohio coast of Lake Erie in August 2015 has reportedly been leaking a gaseous substance. The U.S. Coast Guard reportedly worked to remove hazardous materials from the shipwreck a few months later but the vessel remained submerged.

City officials in Newport Beach are currently helping a private company remove a sunken scow from the floor of Newport Harbor.

Monte Carlo reportedly launched in 1921 and, for her first 15 years, was known as S.S. McKittrick. She was reportedly renamed Monte Carlo in 1936, a short-lived moniker as the vessel met its final fate on Jan. 1, 1937.

A narrative of the vessel, reportedly 300 feet in length, in a book about Coronado’s history stated no one claimed ownership of Monte Carlo after she crashed into the beach.

“Various agencies including the U.S. Navy, U.S. Coast Guard and city of Coronado are still in dispute as to whose responsibility and liability lies with the wreck,” Katharine Carlin wrote in her book, “Coronado: The Enchanted Island.”

The author added Monte Carlo became an illegal structure once it beached in Coronado.

“Floating gambling vessels such as the Monte Carlo were quite a draw in this era of Prohibition,” Carlin said. “Small boats ferried partygoers to the festive ships where they could gamble and drink without fear of the law. Because Monte Carlo was technically illegal once she was beached inside the 3-mile limit, no one wished to claim ownership and slowly her wooden superstructure began to break up without any private party or body of government laying claim to her.”

Carlin noted the gambling vessel was anchored 3 miles offshore and broke from her mooring before rough seas and high winds caused Monte Carlo to eventually crash on the Coronado shore.

“Sometime after midnight on Jan. 1, 1937, after the crowds had gone ashore and leaving only the two-man crew aboard, the party ship lost her anchor,” Carlin wrote in her book. “She began her helpless drift toward shore, finally settling just south of the Hotel del Coronado. Although two crewmembers managed to get to shore, one sailor swam out to claim salvage and drowned.

“Coronadans by the hundreds flocked to the scene, grabbing gambling tables, roulette wheels, silverware and liquor that washed ashore as the vessel lay pounded by the surf,” Carlin continued.

Gambling ships such as Monte Carlo were quite common off the Southern California coast in the late 1920s and through the 1930s. William Norman Thompson’s book “Gambling in America: An Encyclopedia of History, Issues and Society” said the first offshore gambling venues – anchored barges –were seen off the California coast as early as 1926.

“The barges were well lit and could be seen from the shores. State officials did not like the boats, but they were frustrated in attempts to enforce state anti-casino laws, as the boats were considered to be in international waters,” Thompson wrote. “The boats could accommodate as many as 600 players.”

Federal legislators successfully limited gambling aboard ships with U.S. flags during the late 1940s and early 1950s, according to Thompson. The restrictions continued until 1992, when Congress amended legislations to permit gambling aboard vessel in international waters and in waterways touching states permitting gaming.