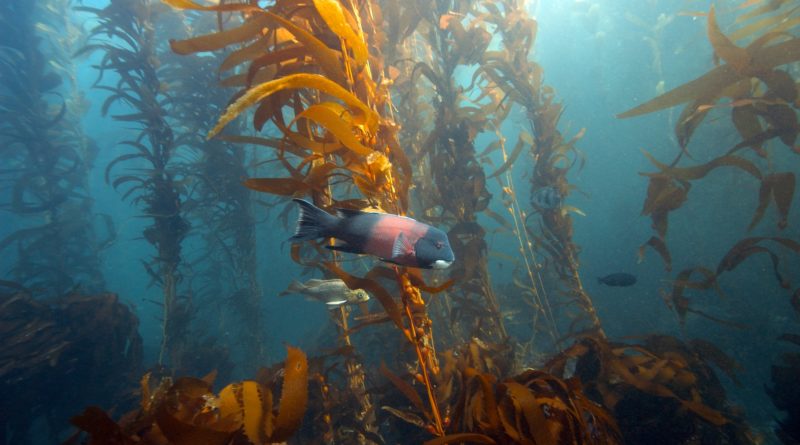 The three main organizations responsible for establishing, managing and protecting the area were recognized for their efforts at a ceremony Jan. 24 in Santa Barbara.

SANTA BARBARA—The State of California Department of Fish and Wildlife, the National Oceanic and Atmospheric Administration’s Office of National Marine Sanctuaries, and the National Park Service were recognized for their collaborative efforts in establishing, managing and protecting the northern Channel Islands Marine Protected Areas (MPAs).

The Marine Conservation Institute awarded the northern Channel Islands MPAs a Blue Park Award at a ceremony at the Santa Barbara Zoo on Jan 24. The Blue Park Award recognizes MPAs that meet the highest science-based standards for marine life protection and management, meaning they are well designed, effectively managed, and deliver on their commitment to protect marine biodiversity for generations to come.

“Where can we say, here is a great shining example,” Dr. Lance Morgan, president of Marine Conservation Institute, said.

The Channel Islands MPA network was designed to protect and restore habitats and ecosystems, provide reference areas for research and educational opportunities and protect the nation’s marine natural heritage for future generations.

Morgan said the northern Channel Islands MPAs have not only delivered on those goals, but have also provided a great model of collaboration between state and federal agencies.

The Marine Conservation Institute created the Blue Park initiative with the goal of protecting 30 percent of the ocean by 2030.

Morgan said the Blue Park Award was partly created to incentivize MPAs to be more than “paper parks,” – protected areas that show up on a map but have little or no management or conservation efforts.

“They look good on a map but there’s not effective management,” Morgan said of paper parks.

Since 2016 when the award was created, 16 parks have been awarded the Blue Park Award – just two in the U.S., one being the network in the northern Channel Islands. Nominees for the award go through a rigorous evaluation using science-based criteria including biodiversity value, implementation, regulation, management and compliance and ecosystem representation. The process also includes a review by an independent scientific panel.

“We take pride in our nearly four decades of scientific efforts which contributed greatly to the forming of the Channel Islands MPAs and our partnerships in education, resource monitoring, and resource protection to protect these important areas well into the future,” said Ethan McKinley, Superintendent of Channel Islands National Park, in a released statement.

Channel Islands National Marine Sanctuary Superintendent Chris Mobley said data collected has shown the abundance, size and diversity of fishes, especially ones hit hard by harvest, have increased in the northern Channel Islands MPAs. He said the main reason they have been so successful is the collaboration not just between the three honored organizations, but a slew of other partners, as well as anglers.

“The number one reason it deserves being recognized is fishermen do know the rules and follow them and respect them,” Mobley said.

The network of MPAs was implemented in the northern Channel Islands in 2003. The network covers 318 square nautical miles and is made up of 11 marine reserves where all take and harvest is prohibited and two marine conservation areas, which allow a limited take of lobster and pelagic fish, such as tuna and salmon.

The Channel Islands MPAs are part 124 across the state.