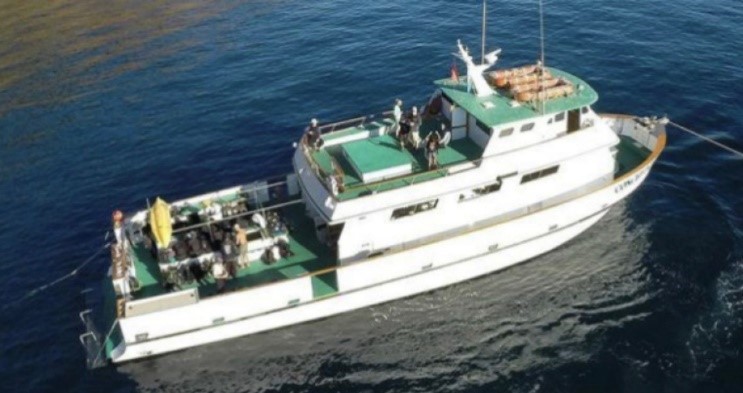 The docket includes interview transcripts, photographs, and other investigative materials but does not include any analysis, recommendations or a probable cause determination.

The docket does not include any analysis, findings, recommendations or a probable cause determination. That information will be released at the end of a public board meeting scheduled for Oct. 20 at 9:30 a.m., Eastern Standard Time.

The docket does include details about the fire, which broke out in the early morning hours aboard the 75-foot commercial diving vessel while it was anchored in Platts Harbor off Santa Cruz Island. There were 39 people onboard. All 33 passengers and one crew member who were sleeping below deck when the blaze broke out died in the accident. Five crew members, including Capt. Jerry Boylan, were able to escape.

Statements from the captain and surviving crew members confirmed there was no roving night watch as required by law. According to statements from crew members, Michael Kohls, the second galleyhand, was the first to discover the fire and alert others.

“I was in my bunk room asleep when I heard what sounded like a chair moving,” Kohls, a crew member, told investigators. “I laid in bed for about 5 minutes when I decided to investigate after hearing a scream. I came out of my room and tried to enter the galley, which was completely engulfed in flames. I called out ‘FIRE’ to everyone onboard.”

A fire and explosions report said the cause of the fire remains undetermined but listed several potential fire safety issues including lack of regulations requiring smoke detectors in all the vessel’s compartments and, in particular, those that must be used during an escape; lack of a roving watch person; both emergency exits from the passenger bunkroom led into the same compartment; unattended overnight charging of battery-powered devices in the egress pathway; size and accessibility of emergency exits; and flammability of interior materials.

The report said despite the passenger bunkroom complying with applicable egress regulations requiring two independent means of emergency exit, the configuration “played a role in the accident.”

The bunkroom had two exits, the main staircase in the forward part of the compartment and the escape hatch above a passenger bunk at the aft end of the compartment. Both exit pathways led into the salon and galley compartment. This configuration was approved by the Coast Guard as per the means of escape regulations.

Another safety issue the report pointed out was the use of large polyethylene trashcans throughout the interior and exterior areas of the vessel. New T-regulations do not allow for these types of trash cans to be used in passenger bunkrooms and instead require them to be constructed of non-combustible materials. New-T regulations also extend the prohibition on combustible trashcans to all compartments but only apply to old-T vessels when the trashcans are replaced.

The fire and explosions report noted several possible ignition sources, including smoking materials possibly being thrown into a plastic trash can under the stairs and batteries being charged below deck.

According to crew statements, cameras, phones, laptops and lighting batteries for dive lights were plugged in to charge in the salon on the night of Sept. 1.

“It was basically both of the aft tables were covered in cameras and electronics,” Milton French, a crew member told investigators. “And, I mean, it’s not outside of what we do. But like the camera is still like drying, and it’s sitting next to the battery that’s charging, and that’s just how it has always been every single time. It’s not even something I was considering.”

He also said it wasn’t uncommon for passengers to bring their own power strips.

The fire and explosion report said crew descriptions consistently identified the aft portion of the salon compartment on the starboard side as exhibiting more intense fire involvement at the time of discovery.

“No physical evidence was recovered that could be identified as an ignition source or indicate a specific ignition location within that area,” the fire and explosion report said. “Therefore, the cause of the fire is undetermined. Besides the electrical system in the salon, and the charging of electronic devices and batteries, there do not appear to be other sources of ignition energy available to initiate a fire in the aft interior portion of the Conception’s salon.”

Conception was owned by Truth Aquatics, which owns two other boats based in Santa Barbara Harbor, Vision and Truth. In October 2018, a small fire involving a charger plugged into a power strip broke out on Vision. The owner of Truth Aquatics, Glen Fritzler, told investigators he was only made aware of the small fire on the Vision after the accident on the Conception.

Following the Conception fire, a Coast Guard inspection of Vision found 44 violations, including 12 related to fire safety. It reduced the boat’s overnight capacity to 33 people, stating the double bunks do not allow for free and unobstructed escape.

The docket can be accessed at go.usa.gov/xGNeg. NTSB said no conclusions about how or why the fire and subsequent sinking occurred should be drawn from the information within the docket.