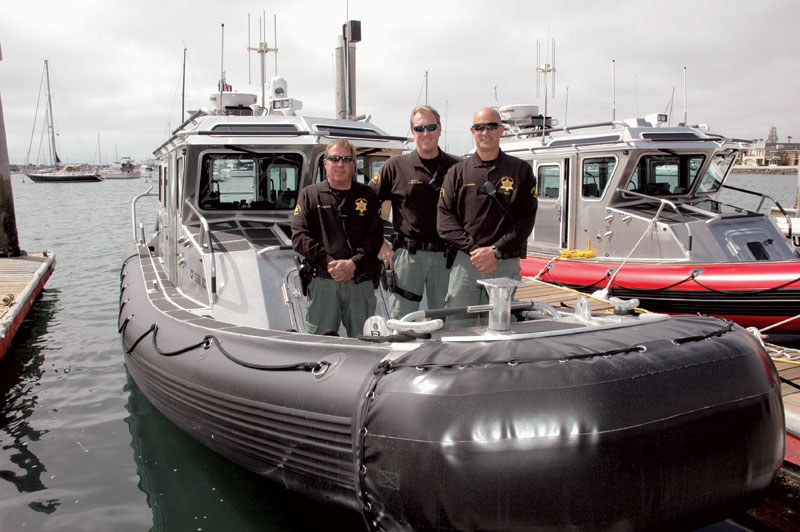 NEWPORT BEACH — Two shiny, new Orange County Sherriff’s Harbor Patrol boats are now docked and ready to go at the agency’s Newport Beach station on Bayside Drive, giving the fleet an upgrade in its firefighting capabilities and a powerful new tool for its role in Homeland Security.

The two vessels, developed by Washington-based SAFE Boats International (SAFE stands for “Secured Around Flotation Equipped”), have the same 34-foot aluminum hull design, same engines and same look, but they are equipped for two different missions.

The fireboat, which completed testing in March, will be utilized in the same manner as the fleet’s other fireboats, responding to calls and patrolling the harbor when needed. Its bow and stern fire hoses will make it a powerful tool in firefighting, and the boat’s oceangoing hull design, larger engines and fully enclosed cabin will lessen response times for calls outside the breakwall.

“Usually when we purchase a fireboat, we have to put our own equipment into it,” said Orange County Harbormaster Lt. Tom Slayton. “But the SAFE Boats, they put all of their equipment in it, so now that we have it, we are just testing out the equipment, since it’s ready to go.”

While the foam flotation collar that lines the fireboat’s hull is orange, making it highly visible in the harbor, the Homeland Security vessel is silver and black — colors the Harbor Patrol hopes will allow it to cruise unnoticed when the boat is on the lookout for human- and drug-smuggling activities off the coast.

Paid for with federal money as part of Operation Stonegarden — a nationwide Department of Homeland Security grant program — the boat is outfitted with the latest night vision and scanning equipment, and it is designed to spot and apprehend unknown vessels off the coast that could be participating in smuggling activities.

With a price tag of around $400,000 each, the boats are equipped with three 300 hp Yamaha outboard engines and are capable of reaching speeds around 60 mph. The boats’ manufacturer, SAFE Boats, has been producing patrol boats for the U.S. military, fire and rescue operations, police departments and multiple federal agencies since 1997.

SAFE Boats utilize a hull with a patented foam collar that has made them a leader in the industry, Lt. Slayton said. Similar boats with air-filled collars are more susceptible to deflation, and in turn, sinking.

Lt. Slayton said he expects the vessels’ aluminum hulls to extend their usage, in comparison to the fleet’s aging fiberglass-coated wood-hull boat.

“These things are screaming fast,” said Harbor Patrol Sgt. John Hollenbeck, after going out on a recent ocean test aboard the fireboat. “We got the fireboat up to 58 mph out in the open ocean, and you don’t even feel the waves.”

The vessels are all new to the Orange County Sheriff’s Harbor Patrol — with new designs, new capabilities, and new lessons to be learned.

“We’re not used to having 900 hp,” said Deputy William Nelson. “With these outboard engines so far away from the back of the boat, it’s a little more difficult to maneuver in tighter spaces, but it’s just something we’re getting used to.”

The vessels’ design prompted some new training styles for the officers. On the old boats, Harbor Patrol officers were trained to “stern up” on most calls, angling the back of the boat toward distressed vessels or in man-overboard situations, with the swim step being utilized in most situations.

“It’s a new vessel, so we’re going to be learning new ways of how to operate from it,” Nelson said.

Lt. Slayton said that the SAFE boats have a patented hull design that allows for the vessel to turn at high speed, without having to slow down.

“In smooth water, you can do a complete U-turn on the boat at 40 mph,” Lt. Slayton said. “That’s why the vessels are outfitted with seats you can strap into.”