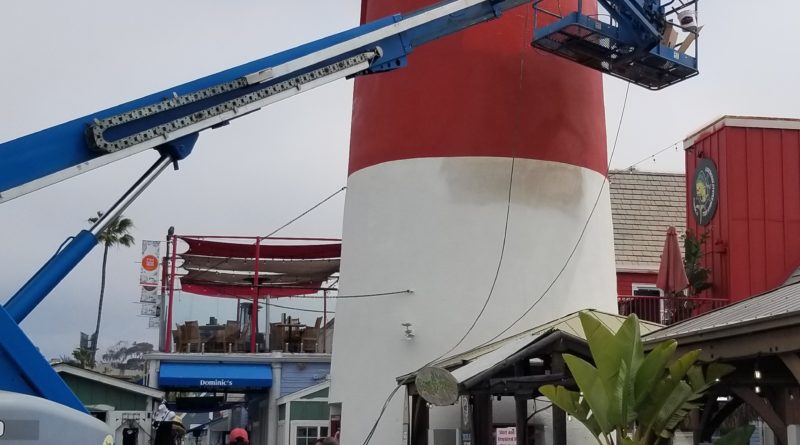 The Oceanside City Council recently approved a revamped work plan for the harbor.

OCEANSIDE—It’s the small details at Oceanside Harbor – a fresh coat of paint on the Harbor Village Lighthouse and regularly pressure washed sidewalks – that keep the nearly six-decade old recreational harbor looking its best.

The Oceanside Harbor and Beaches Advisory Committee is a key player in identifying ways to improve the harbor, described by committee chair Liz Rhea as a “sleepy little gem.” The committee is now taking steps to have a more proactive role in that process.

The harbor appearance is one of four components the Harbor and Beaches Advisory Committee is focusing on in a recently revamped work plan for the harbor.

“I have said, the harbor may be old, but it can be kept clean and look good,” Oceanside Harbor Manager Ted Schiafone said in an email.

Schiafone has been at the helm of the harbor since late 2017. He said when he came on board the Fiscal Year 2016-18 Work Plan had already been established and had not been modified for more than 10 years. Schiafone recently worked with the Harbor and Beaches Advisory Committee to create a more robust work plan for fiscal year 2019-21. The Oceanside City Council approved it at their Aug. 21 meeting.

“Specific goals were very general and had not been modified for over 10 years,” Schiafone said. “It told me the work plan was routine and not a working document to make the necessary improvements at Oceanside Harbor.”

The committee only advises and does not set policy. However, Schiafone said he believes the committee needs to bridge communication with all of the harbor stakeholders and then recommend solutions and initiatives the staff can implement.

Rhea said for the first time they have broken off into subcommittees, with each working on one of the four areas: harbor operations, harbor finances, harbor appearance and long term vision.

“Staff has found many creative ways to improve services, such as handling after hours transient boaters and monitoring our remote transient docks via internet cameras,” Schiafone said.

Schiafone said harbor operations and appearance are something they can work on every day. The goals listed on the work plan for appearance include monitoring harbor assets and property for simple and inexpensive ways to improve overall appearance and recommending standards for vessel appearance. Rhea emphasized that while they want to improve the harbor appearance and experience for visitors, it is equally important to them to keep it affordable for the working class.

“Keep it simple,” Rhea said of her ideas for improving the harbor.

Some of the ways the committee is doing that is by increasing contracted services to ensure sidewalks, benches, tables, trash receptacles and docks are pressure cleaned on a regular basis. They have also begun interior remodeling of all harbor restrooms. Schiafone said another thing they are doing is working with their largest tenant that operates the Harbor Village, a series of retail businesses and restaurants at the water’s edge, to make improvements.

“They agreed to repaint the entire exterior of their buildings this past spring, even though they were not obligated in the lease to do that for many more years,” Schiafone said.

The harbor finance subcommittee will review harbor financial statements and budget to recommend ways to increase revenue and/or decrease expenses. Schiafone said the harbor maintains a small profit every year and has been building up a reserve fund, which is being used to make improvements such as the restroom remodel, upgrading electrical service and increasing the number of storage lockers on docks.

The final subcommittee is addressing the long-term vision, which includes providing input on a three-year plan to determine remaining life of all assets and docks, designing the future harbor and determining financial path to rebuild in approximately 15-20 years. Plans are in place to replace the harbor’s 30-year-old transient vessel dock, as well as the J-dock in 2020-2021, which Schiafone said would deplete their reserve funds.

Rhea, who is on the harbor financial subcommittee, said one thing they are looking at is grants. The harbor has applied for a grant from the California Department of Parks and Recreation Division of Boating and Waterways to help cover the cost of replacing the transient vessel dock.

“I am looking forward to the sub-committees ideas and recommendations especially as it relates to harbor financials and long-term vision,” Schiafone said.

Rhea and Schiafone both said ultimately, the idea behind the work plan is to ensure the harbor is available to future generations.

3 thoughts on “Oceanside beefs up work plan for harbor”