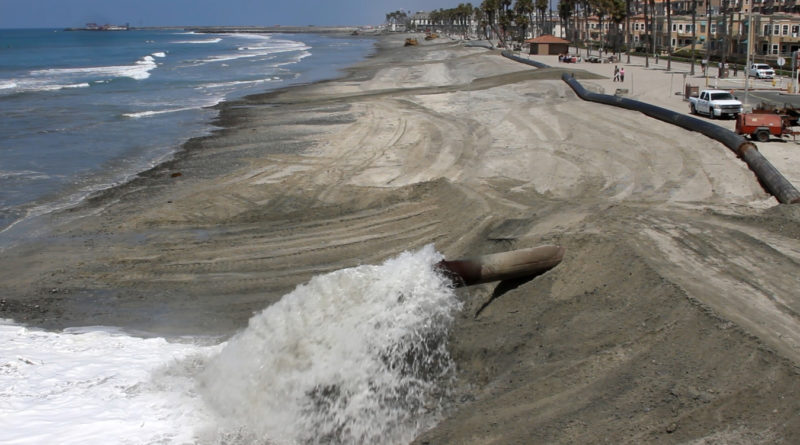 The dredging project deepened the federal channel north of Oceanside Pier and filled the beach adjacent to the pier with fresh, uncontaminated sand.

Replenishing the city’s beaches from harbor dredging has not been enough to save them from sand erosion.

OCEANSIDE—A stretch of beach along the North San Diego County coast is beginning to disappear, and the city of Oceanside hopes to do something about it.

The issue, however, is high tide: the city’s stretch of beach suffers from sand erosion whenever waves crash upon a rip rap separating the seaside from the rest of the city.

Oceanside was home to wide beaches before the arrival of Camp Pendleton and the city’s harbor, particularly along a stretch of Oceanside coast south of San Luis Rey River, according to a report in the San Diego Union-Tribune.

The same news report stated several federal government studies confirmed Oceanside Harbor was cited as the reason why the city’s once wide beachfront is now struggling to retain sand.

Another part of the problem: sand from Oceanside reportedly navigates south to cities such as Carlsbad and Encinitas. Sand does not return from the north, however, thanks to a jetty at Del Mar Beach.

Sand doesn’t come to Oceanside’s beaches from the San Luis Rey River, thanks to a dam at a freshwater lake several miles inland.

An Army Corps of Engineers study on the Oceanside shoreline, mandated by an act of Congress in 2000, is still underway and not yet completed – almost 20 years after it was authorized.

A group of Oceanside residents, meanwhile, have banded together in hopes of protecting and preserving the city’s stretch of beaches. The group – !S.O.S. Oceanside! – has specifically advocated for the installation of groins along the city’s coastline. Groins, according to the !S.O.S. Oceanside Facebook page, are “short, narrow jetty-like structures built to the water’s edge to prevent coastal erosion.”

“A fortified sandy beach can be Oceanside’s best tourist attraction, will protect property from storm damage, and bring back the wildlife that used to thrive on our shores,” the group’s Facebook page stated. “The disappearing beach sand has also affected Public Safety, as our local Fire Department/Lifeguards can no longer drive onto the beaches here with their emergency service vehicles.”

The “S.O.S.” in !S.O.S. Oceanside! stands for “Save Oceanside Sand.” The group held a meeting and beach party at Oceanside’s Buccaneer Beach Park on Oct. 13.

Oceanside city staff is expected to bring a proposal and report at an upcoming meeting. The Log will follow-up with this story when it is back on the Oceanside City Council agenda.