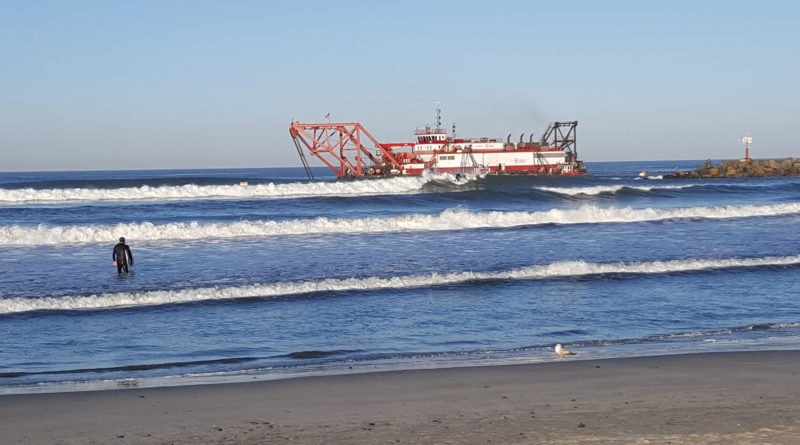 Editor’s note: The Log received correspondence from U.S. Army Corps of Engineers  on Aug. 24 that dredging would begin in fall. In an issue following this one, The Log will feature a story on the latest developments.

OCEANSIDE — Dredging, or removing built-up sediment and debris from water bodies, is usually a fairly routine practice around the country. California, with its many coastlines, recreational lakes and other water flow, is high on the list for dredging practices. Oceanside, on the other hand, is facing difficulty initiating dredging and is facing erosion and sand-loss at local beaches. The most recent attempt to dredge Oceanside Harbor has been delayed.

Kiel Koger, Oceanside’s public works division manager, had been quoted in a San Diego Union Tribune article as placing the blame on the U.S. Army Corps of Engineers for not applying for the permit to dredge in time. The Corps, in response, stated too much material had been removed during the previous dredging session. As a result of the decision to postpone dredging activities, Oceanside officials, local beachgoers and businesses are frustrated with the seeming lack of momentum from the federal agency.

In a memorandum released by the Public Works Department, dated July 24, the blame was placed squarely on the Corps’ failure to secure a permit.

The memorandum read: “This project was cancelled in May due to the failure of the Corps to secure a permit from the Regional Water Quality Control Board (RWQCB).”

The paper continued, “Staff previously solicited Congressman [Darrell] Issa’s office assistance to help expedite the permit even though it was the Corps responsibility to do so but was unsuccessful. The Corps issues a letter to Mayor [Peter] Weiss on May 18, 2018 explaining the reason for the cancellation as well as stating that the Corps would be performing multiple depth surveys of the channel in the upcoming months. The Corps along with city staff continue to monitor the channel depths and will determine if dredging needs to be performed later in the year. Per the Corps, it is likely dredging will need to take place later this fall.”

A contract agreement between the city and Corps was entered into in 2017, which allowed (“beyond the authorized level,” according to the memorandum) the city to foot $600,000 for additional dredging.

In the Shoreline Feasibility Study, it was stated funding for the study “is supposed to be funded 100 percent by the Federal Government,” but the Corps “changed their position and told city staff that feasibility studies typically require cost sharing from the local sponsor.” The objective of this study was to determine if construction of Camp Pendleton Harbor further impacted erosion, explore options to lessen erosion, estimate structural damage on the beaches that contribute to erosion and restore sediment to local bodies of water and restore sand to Oceanside beaches.

Oceanside Harbor Manager Ted Schiafone told The Log in an email nothing new concerning the matter of dredging has come up since the cancellation announcement. Schiafone, however, also said that harbor staff would be meeting with Corps on Aug. 28.

“Hopefully, we will know more at that time,” Schiafone stated.

City staff have long expressed dissatisfaction with the way dredging has been handled in the city of Oceanside.