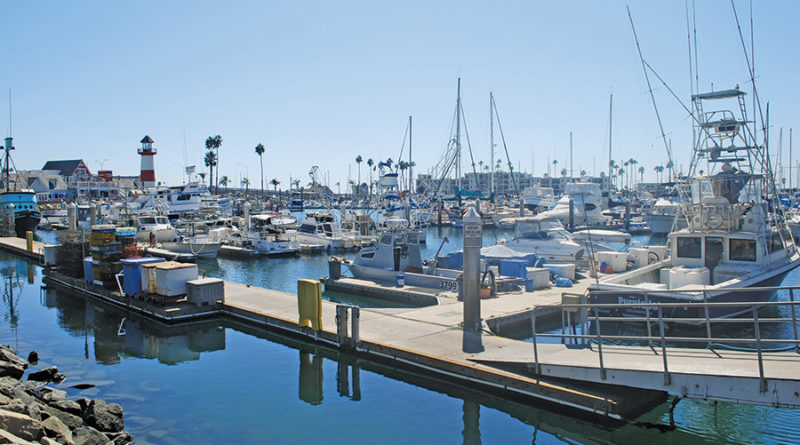 The harsh environment and constant use have contributed to the deterioration of the 30-year-old transient dock, according to a staff report.

OCEANSIDE—The Oceanside Harbor District Board of Directors adopted a resolution approving plans to use a possible grant to replace the transient vessel dock in front of the Jolly Roger Restaurant, making it the second dock the harbor has plans to rebuild.

Years of wear and tear, according to grant documents, have left the concrete docks cracking and showing signs of spalling. Harbor Manager Ted Schiafone said the dock, which is often at 100 percent occupancy, needs to be replaced because it is nearing the end of its useful life. He said the rebuild would include more space, increasing the number of slips handling vessels up to 38 feet from nine slips to 16. The new dock will also increase the end tie from 42 feet to 80 feet. The harbor maintains the transient vessel dock for visitors and other boaters who can moor there at a daily rate.

According to a staff report, the replacement of the 30-year-old dock has a total price tag of $848,032. The staff report said the project would be completed with $636,024 in grant funds from the California Department of Parks and Recreation, Division of Boating and Waterways Oceanside Harbor and Beaches Advisory Committee (DBW). The city would need to provide 25 percent in matching funds in the amount of $159,006 and an additional $53,002. According to grant documents, Oceanside Harbor Maintenance and Operations funding would be used for the required 25 percent match.

The Harbor District Board of Directors, at their Aug. 21 meeting, adopted a resolution accepting the grant funds from DBW. The grant has not yet been accepted by DBW, but required the board’s approval before moving forward in the review process.

“This project is solely dependent upon gaining approval of the grant,” Schiafone said in an e-mail.

He said they should hear the status of the grant by March 2020 and the work should take less than 60 days. According to grant documents, the Oceanside Harbor District will continue to apply standard transient slip rates once the construction is complete.

If accepted for the grant, Schiafone said the harbor might be able to combine the construction with the replacement of J-Dock, which will be replaced in 2020/2021.

In April, the city approved a $3.2 million dollar plan to replace J-Dock, which is the oldest and second largest dock at the harbor.

“It is for that reason the harbor needs a long term plan to pay for the eventual replacement of all docks and upland assets,” Schiafone said in an e-mail.

J-Dock, according to a staff report, has also reached the end of its lifecycle. Plans for the new J-Dock include a new, modern, low-maintenance dock system with an ADA gangway, upgrades to the fire suppression system, electrical supply and storage. J-Dock is home to more than 40 slips that are leased to long-term boat owners, including a few who live aboard their vessels.

With two docks already in need of replacing, the Oceanside Harbor and Beaches Advisory Committee has dedicated a subcommittee to looking at the long-term vision for the harbor. Part of that will entail providing input on a three-year plan to determine remaining life of all assets and docks and determining financial path to rebuild in approximately 15-20 years.

One thought on “Oceanside planning to replace a second dock”