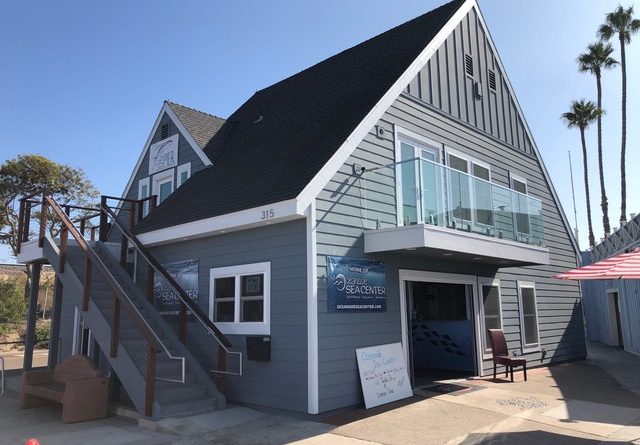 Sea stands for sportsfishing, education and adventure; the center aspires to be more than just a typical landing, promoting marine stewardship and also offering an array of educational activities for all ages.

OCEANSIDE—Out on the ocean – you’re here to fish, but a white bird catches your eye. Definitely not a seagull, but what is that bird?

This curiosity, connection with marine life, is what Capt. Joe Cacciola calls the ocean experience. A longtime resident of Oceanside, Cacciola has been leading sportsfishing trips with Sea Star Charters for decades. A major promoter of marine stewardship, he strives to create an environment where the value is on the experience out to sea and not the number of fish hauled back to shore.

“Attitudes have changed,” Cacciola said. “People don’t have to drag sacks of fish off the boat to say they had a great day.”

He has had a decades-long dream of creating a business pairing sustainable recreational sportsfishing and marine science. In December 2017, his dream came to fruition with the opening of Oceanside Sea Center, a joint venture between Cacciola, Capt. Ernie Prieto of Chubasco Sportfishing and Pfleger Institute of Environmental Research (PIER), a non-profit 501(c)(3) organization.

“We’re not just another sportsfishing landing with a change of ownership,” Cacciola said. “We’re setting the bar a little bit higher.”

The process of getting the Sea Center open has been tumultuous, according to Cacciola, who responded to a Request for Proposal from the city in 2016 for the building at 315 S Harbor Drive. Helgren’s Sportfishing had leased the space since 1979, but the agreement was expiring. Cacciola was successful, securing negotiating rights.

Oceanside Sea Center officially opened in December 2017 but the two-story, 2,400 square-foot building was in need of major renovations.

“There were architectural plans we had to come up with, structural engineering, permits, contracting,” Cacciola said.

He said they pumped about $175,000 into brining the building to current standards and those renovations wrapped up just a few months ago, in November 2019.

Cacciola had been pursuing the dream of a landing such as this since the mid ‘90s.

“We kept the vision alive, I never gave up,” Cacciola said.

Oceanside Sea Center offers sportsfishing trips, whale watching, a tackle shop and a floating science program for students, with more projects in the works. PIER operates its research facility and office on the second floor of the Sea Center and is contributing to some projects including a 1,000-gallon aquarium tank. PIER funded the custom-built tank through donors. It will be stocked with a variety of local coastal specimens and open to the public to view. The tank arrived in December and Cacciola said it should stocked and operational by April.

The landing is also putting together a touch tank, which will be installed in a dock side float in the harbor. That tank will be full of sea stars, sea urchins, sea cucumbers and other sea creatures able to be gently held in a human hand. Guests will be able to experience the tank with the guidance of a naturalist. Cacciola said the touch tank will open sometime in the spring.

Another aspect of the landing is the floating science program, which Cacciola has been running since 1996. The program is open to kids groups – schools, youth groups and other organizations. It takes place aboard Sea Star. The experience is very hands on, with students getting to touch various sea life, work with oceanographic equipment and scientific instruments and go on an expedition out to sea.

“For a lot of kids it’s a first time experience,” Cacciola said.

This marine science component is not limited to the floating science program. Cacciola said he incorporates this in all his sportsfishing trips, naming birds, looking for pods of dolphins. He said he hopes to give customers a great fishing experience as well as a learning experience.

“It’s all part of this experience and what makes going to sea so special,” Cacciola said.