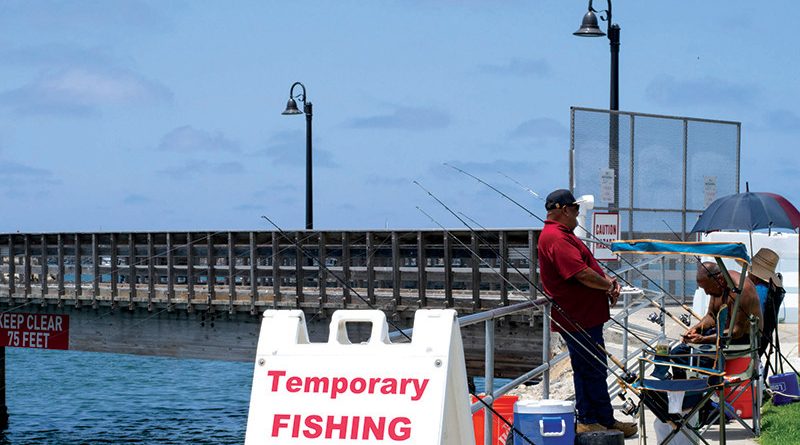 The small craft fishing pier in Oceanside Harbor is closed but anglers are able to fish at a temporary spot located adjacent to the south side of the fishing pier entrance. Lindsey Glasgow photo

The issues indicated potential critical failure and the pier was immediately closed.

OCEANSIDE一 Oceanside Harbor has shut down its small craft fishing pier after an inspection identified structural deficiencies, including failures on pile cap connections, angle braces, beam hangers, and severe corrosion. The pier closed on June 17 and will remain closed until repairs can be made. Ted Schiafone, the harbor division manager, said they do anticipate some structural repairs connecting the pilings to the deck will need to be made and said he is hopeful to have a timeline for reopening the pier by August.

In the meantime, harbor staff created a temporary location to fish in the harbor, at the suggestion of Oceanside Sea Center, located adjacent to the south side of the fishing pier entrance.

The structural issues were brought to light during a harbor-wide assessment conducted by Brady & Associates of San Diego. The harbor has been undergoing an assessment of all harbor assets to determine the current condition of each harbor asset, the estimated remaining life of the asset, a future maintenance plan, and estimated costs for that future maintenance. The study began in February and is expected to be completed by November 2021. A Brady & Associates’ subcontractor will also prepare a proposed financial plan to ensure the harbor can continue to support its operations.

In late May, during the initial phase of the study, Brady & Associates identified some potential structural issues on the pier that were hidden from view and harbor staff initially limited capacity of the pier to 10 individuals. However, additional information was revealed indicating potential critical failure and the pier was immediately closed.

“Brady has prepared an engineered repair plan that has gone out to three qualified marine contractors,” said Schiafone in an email. “As soon as we have those estimates in hand and repairs are made, we will determine a time when the Pier can be reopened.”

Schiafone asks Oceanside Harbor visitors and anglers to only fish within the temporary location set up adjacent to the south side of the fishing pier entrance.

“This is a high traffic area and we don’t want to see other pedestrians injured,” said Schiafone in an email.

The city’s larger ocean pier remains open for fishing. The ocean pier is 1,954 feet long and one of the longest piers on the west coast. The harbor fishing pier is much smaller at about 100 feet but still very popular. In the summer months Schiafone said they see well over 30 people fishing on the pier each day.

Once the inspections and study by Brady & Associates are completed, Oceanside will determine what work in the harbor needs to be done and how much it will cost. Oceanside Harbor was constructed in 1961 and most of the harbor’s docks were upgraded or replaced in the 1980s, with a few exceptions including the Guest Dock and Y-Dock which were upgraded between 2007 and 2009; Coast Guard Dock in 2001; X, W, V, U and T in 1997 and 1998. Repairs to the oldest dock in the harbor, J Dock, were completed this spring.