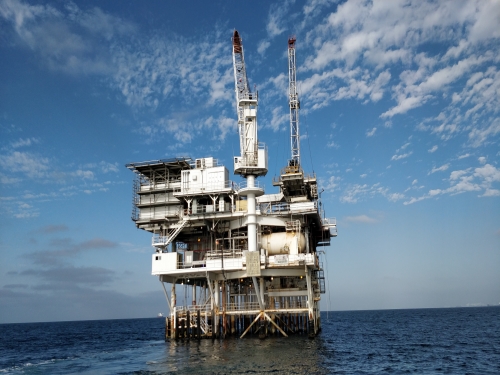 California Coastal Commission is expected to review status of four leaking wells off the coast of Santa Barbara County.

SANTA BARBARA COUNTY—One of California’s largest agencies is proposing to “permanently re-abandon” four leaking legacy oil wells located off the Santa Barbara County coast. The offshore wells are located in the Summerland Oil Field and were developed, without regulations, in the late 19th and early 20th centuries. Each of the wells “periodically leak crude oil,” according to the California Coastal Commission.

The Coastal Commission will review the proposal on Aug. 12. Each of the wells are located in the subtidal and intertidal zone of Summerland, which is an unincorporated area of Santa Barbara County.

The four wells in question are C.H. Olsson 805, Duquesne Wharf, NorthStar 815 and Treadwell 10.

“The proposed operation would require the use of heavy equipment, vehicles, and specialized machinery on beach and intertidal areas, as well as the mooring and operation of a work barge and use of underwater excavation equipment for offshore wells,” Coastal Commission staff said in a report to commissioners. “Depending on [State Lands Commission] funding, tides, and availability of the crane barge, abandonment will occur in phases over a 2- or 3-year period.

“The intertidal wells can only be re-abandoned during periods of extreme low tide, whereas the offshore wells can be accessed for re-abandonment during any favorable marine weather conditions,” the report continued.

It is likely the project will take several years to execute, since state funds made possible for this type of work are “insufficient to allow all wells to be done in a single year.”

The abandonment schedule also depends upon the availability of a crane barge and tides.

Coastal Commission staff, in its report to commissioners, outlined two types of re-abandoning processes. The onshore approach worked for the abandoning of a nearby oil well – known as Becker – in 2018.

“The onshore well abandonment approach consists of exposing the leaking wellhead, installing steel pipe pile and a cylindrical cofferdam around the well using a vibratory hammer, and encapsulating the leaking wellhead using cement and a welded steel plate,” Coastal Commission staff said. “The exposure of the wells will occur by excavating 8-10 feet of sand around the wellhead during the low tides. The sand will be allowed to naturally refill the excavated hole by tidal action between work windows.”

Pursuing an offshore well approach will require the use of a craned barge.

“The offshore well approach involves a crane barge anchored over the wellheads, and divers exposing the leaking wellheads by temporarily displacing sand with water jetting tools,” according to Coastal Commission staff. “Once the well cap has been exposed, cold cutting methods and jack hammers will be used to break up the cement well cap to access the original wellhead.

“Well abandonment activities will follow the same procedure as the onshore wells described above after the old barrel and well cap has been removed,” Coastal Commission staff continued.

Post-work monitoring, which would be put in place regardless of approach pursued, would “assess the success of the project activities,” according to Coastal Commission staff.

“The hydrocarbon seepage from the wells is very noticeable from above the water. As a result, drone surveys will be conducted to monitor the wells for seepage. These surveys will occur periodically to ensure hydrocarbons are no longer seeping from the re- abandoned wellheads,” Coastal Commission staff said in its report to commissioners.