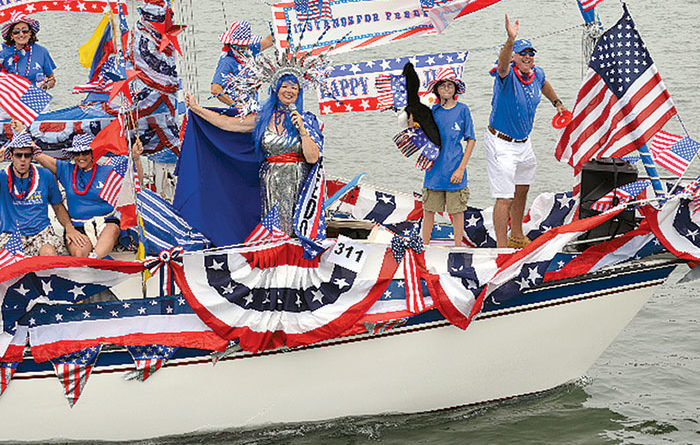 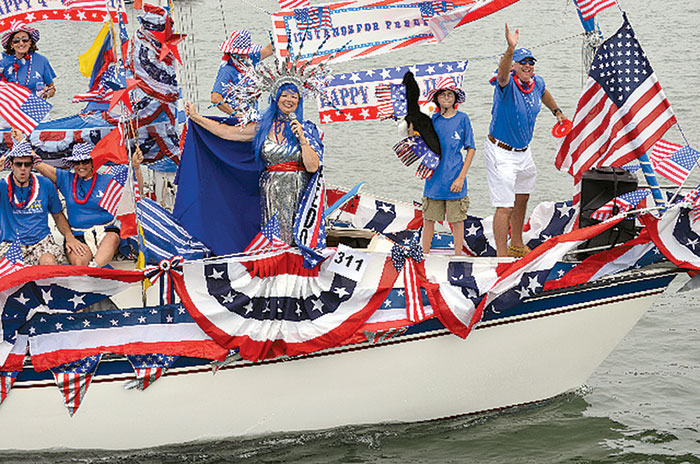 While the sun failed to make an appearance at this year’s parade, gray skies didn’t keep the crowds and boat entrants from coming out, enjoying the day at the club’s Post 291 location on Balboa Peninsula.

“Every year, you are in for a patriotic treat, as all kinds of boats try to outshine each other, waiting for the loudest ovations from onlookers,” said Jon Reynolds, an American Legion YC staff commodore and Southern California Yachting Association commodore.

Each year, thousands of onlookers line the harbor to catch a glimpse of the boats adorned with patriotic flags and decorations, as they make their way around Newport Harbor. Boaters dress in America-theme costumes, play patriotic music and give a good-hearted attempt to take home one of the parade prizes — including “best decorated,” “outstanding music,” “finest costumes,” “most creative animation” and “greatest spirit.”

“The parade entrants did a fabulous job decorating their boats, and the parade committee did a great job organizing the parade this year,” said parade committee member Myrna Chan. “It’s easy to do when you know you have thousands of people along the harbor and the Make-A-Wish kids as your audience.”

The parade was led by the Orange County Sheriff’s Harbor Patrol fireboat spraying water high in the air. Ret. Major Gen. Paul Mock served as grand marshal for the day, aboard Neil Hardin’s 50-foot Mallika — the boat’s first time participating in the parade. The parade entrants followed close behind, starting off Collins Island at 1 p.m. making their way around the harbor, giving all waterfront spectators a show.

Active servicemen and servicewomen at Post 291 hosted events throughout the day at the club, including a pancake breakfast and barbecue lunch. Volunteers from the U.S. Naval Sea Cadets and the Orange County Sheriff’s Explorers directed traffic by sea and land.

“The Cadets helped with the Post 291 docks and the Explorers handled the lots — not an easy task on the peninsula’s busiest day of the year,” Chan said.

The Old Glory Fourth of July Parade began in the 1950s as the “Newport Harbor Character Boat Parade,” originally organized by cartoonists Virgil Partch and Dick Shaw. Over the years, the Newport Harbor Chamber of Commerce took over the event — and it became an Independence Day tradition when American Legion YC began hosting the parade, renaming it the Old Glory Fourth of July Boat Parade.

The boat parade winners are scheduled to be announced at American Legion YC’s awards banquet at 5 p.m. July 22.