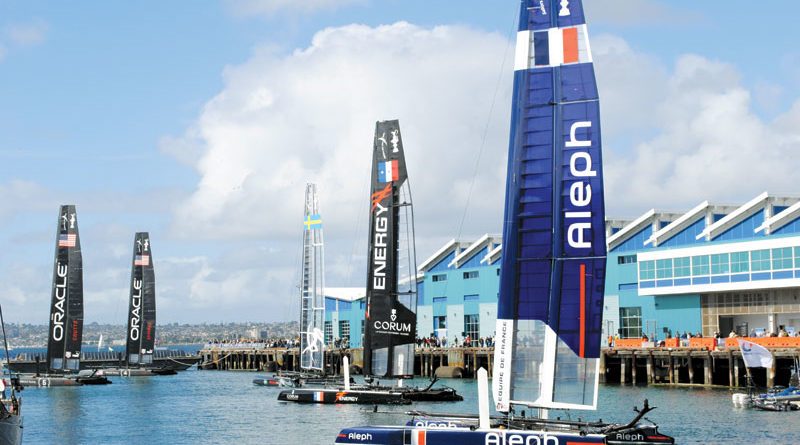 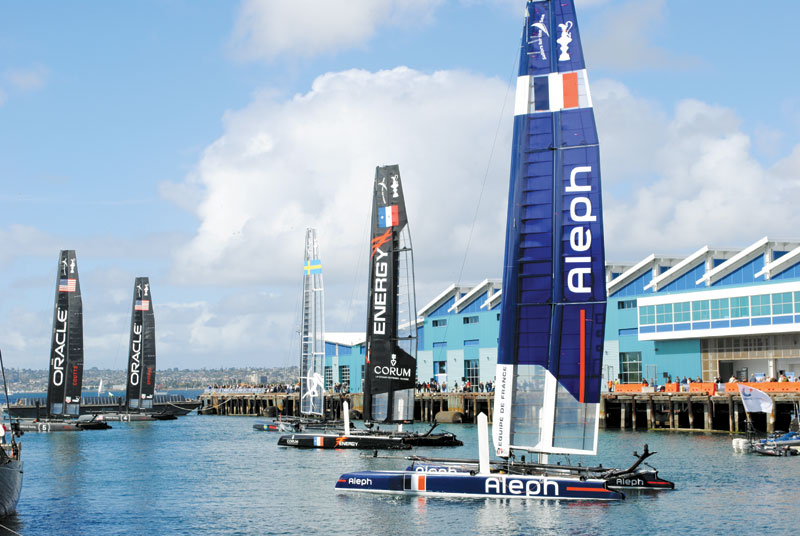 SAN DIEGO — With the strongest winds of the week blowing on the final day of America’s Cup World Series Racing on San Diego Bay, the Cup-defending U.S. team’s

Spithill boat — one of the team’s two competing boats — did its finest work. On Nov. 20, the crew finished first in the fleet racing championship, to go along with their match racing win the day before.

“We really wanted to win the double,” said skipper James Spithill, following the race. “We started OK, but got mixed up in the pack. But JK (tactician John Kostecki) got us back into it, and then the boys did a fantastic job. We were able to stretch away and use our speed.”

Winds through the week measured in the 8- to 12-knot range, but kicked up to 14- to 16-knots Sunday, with gusts up to 20 knots — ensuring that the fastest racing of the week came on the final day.

While the America’s Cup defenders dominated Saturday’s match racing, their work was cut out for them during Sunday’s fleet racing, as

exploded off the starting line to lead the fleet of nine AC45 boats into a tense, action-packed turn at the first mark, just a few hundred yards away.

While the Kiwi team led early, the long leg upwind allowed several teams to shine — none more so than

Artemis Racing, which worked its way up to the front of a very tight pack by the top gate.

’s Spithill crew chose the favored mark at the top, and was soon leading the fleet downwind at speeds near 25 knots — slowly extending away from the pack of boats giving chase.

The week-long event featured top sailing teams from around the world sailing on San Diego Bay aboard one-design 45-foot wing-sail catamarans, in the third leg of the America’s Cup World Series.

Moored between San Diego’s Broadway Pier and Navy Pier for the week, the aerodynamic boats were on display for visitors walking along the Embarcadero — and spectators clamored to get a view of the racing action from the end of the piers, from the

Museum and on the bay, with boaters opting to view the races from the water forming a line of yachts and charter boats along the outside boundary of the racecourse.

While course layouts were changed throughout the week, depending on the wind, many of the races started or finished a mere 100 yards from the end of the Broadway Pier, where a grandstand was erected to provide an unobstructed view of the action.

. The San Francisco-based team had spent 16 months training here in preparation for its 2010 America’s Cup victory over then-cup defender

Oracle Racing was also as the only team with two boats in this year’s America’s Cup World Series. The

Coutts boat (skippered by Darren Bundock) and the

Spithill boat took first and second place in the AC500 Speed Trial, prior to the fleet racing championship, where teams pushed their boats to the limit in an attempt to measure the fastest clocked speed.

The fastest runs came on the teams’ second attempt down the course. First, it was

Emirates Team New Zealand setting the pace, followed by the

juggernaut. Spithill overtook the time set by the Kiwis, but Bundock quickly followed with a speed of 28.67 knots aboard the Coutts boat — which stood as the winning speed.

San Diego is the last event of the calendar year for the America’s Cup World Series. So far, the teams have traveled to Cascais, Portugal and Plymouth, England.

The teams will now have four months of winter training before the next AC World Series stop in Naples, Italy, April 7-15, 2012. An event in Venice follows, May 12-20.

“We’re going to go to some fantastic venues,” said regatta director Iain Murray. “The America’s Cup World Series has grown legs of its own; it has proven itself as a concept. It excites the people, we fit it into the geography of the bays and creating the stadium racing means we can broadcast our racing from the inside out.

“I see the World Series going from strength to strength,” Murray added. “The AC72s are starting to be built; teams are getting stronger and more confident. We’re heading toward some great events.”