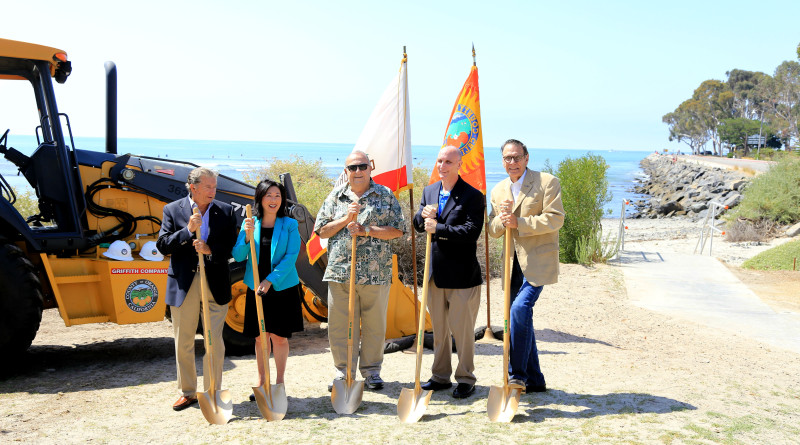 Upgrades could finally be realized after nearly 20 years of visioning and recent negative press.

DANA POINT — When local and regional planners convened in 1997 to put the wheels in motion for a revitalized Dana Point Harbor, they probably did not expect nearly 20 years to pass before a shovel was finally put into the ground.

Alas that shovel broke ground on June 29, 2016 and work on the Dana Point Harbor revitalization has finally begun.

“The street improvements are designed to greatly improve the flow of visitors and boaters coming in and out of this area, and will include: additional lanes, including new right and left turn lanes; a new left-turn lane into the harbor, leading to a new entrance for boaters that will be part of the next phase of the project; and, new ADA-compliant ramps and sidewalk in this exact location,” Widor said, adding about 3 million pounds of asphalt will be used during the first phase of construction.

“The improvements will include work on the center medians along Dana Point Harbor Drive, improvements at Casitas Place and Puerto Place, including new turn lanes on Puerto Place,” she said. “Our common goal has been to modernize the Harbor and increase use of its popular commercial core, as well as provide waterside upgrades for boaters and water sports.”

In the 19 years between conception and groundbreaking the harbor area evolved from O.C. Parks project into an independent Harbor Department operation before reverting back to O.C. Parks – not to mention leadership changes and an audit report revealing an unauthorized hotel discount program for county employees.

The county already spent millions of dollars preparing for the revitalization and is expected to spend quite a bit more to complete the waterfront project as part of public-private partnership.

Orange County’s Board of Supervisors is expected to select a vendor soon to help realize the public-private partnership.

In the meantime Supervisor Lisa Bartlett expressed hope the revitalization project would begin the process of seeing the harbor area transform into a vision decades in the making.

Phase 1 of the revitalization will primarily focus on street improvements, according to county staff.

“The county’s vision of a modernized harbor will begin to come to life by delivering street and parking improvements, increasing the use of the commercial core and providing waterside upgrades for boaters and water sports,” county staff stated.

About 70 people attended the groundbreaking ceremony

Construction work officially began on July 5, about one week after the groundbreaking.

In a separate action earlier this month the harbor officially initiated a sea lion deterrent pilot program. Dana Point Marina Co. initiated the pilot program after a reported increase in sea lion activity in the harbor’s East Basin during the past 18 months.

The harbor’s docks feature hot-air-powered air dancers to deter sea lions from interacting with boaters. Six air dancers have already been placed onto docks and will be in place through the summer season, according to news reports.

Air dancers are commonly seen at car dealerships, with bright colors and its arms constantly waving.